10 works of literature that were really hard to write 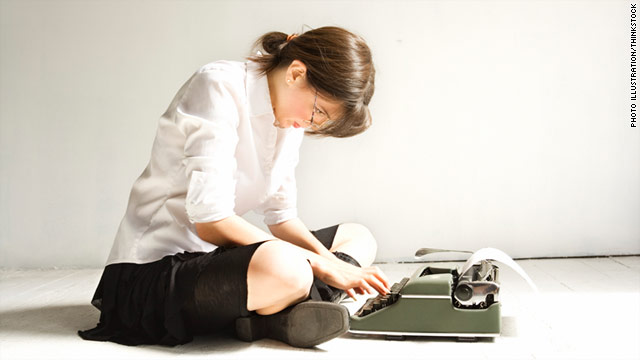 These 10 authors may not be Shakespeare, but they sure had vaulting ambitions.
STORY HIGHLIGHTS
RELATED TOPICS

(Mental Floss) -- 1. The story that will never be an e-Book
"Gadsby" by Ernest Vincent Wright

Some might call "Gadsby" a "love" story. But Ernest Vincent Wright wouldn't have used that word. Instead, he described his novel as a story of "strong liking" and "throbbing palpitation." That's because in 1939, Wright gave himself one restriction: He promised to write "Gadsby" without using the letter E.

Wright wanted to prove that a great author could work around such a restriction and still tell a gripping story. To prevent any stray Es from entering the text, he tied down his typewriter's E key, and then put his expansive vocabulary to the test. The result is an astounding feat of verbal gymnastics. While vividly describing a wedding scene, Wright manages to avoid the words "bride," "ceremony," and even "wedding" (he calls it "a grand church ritual").

To explain away the verbosity of the language, he uses a narrator whose poor command of English and circumlocution even irritates the story's other characters.

When the book was announced, one skeptic attacked Wright in a letter, claiming that the feat was impossible. "All right," replied Wright in the book's intro, "the impossible has been accomplished." Sadly, Wright didn't live long enough to revel in "Gadsby's" critical acclaim. He died the year the book was published.

2. The tale told in the blink of an eye
"The Diving Bell and the Butterfly" by Jean-Dominique Bauby

Many authors have struggled through illness and injury to write their masterpieces, but none more so than Jean-Dominique Bauby, editor-in-chief of French fashion magazine Elle. In 1995, at the age of 43, Bauby suffered a major stroke and slipped into a coma. He regained consciousness two days later, but his entire body -- with the exception of his left eyelid -- was paralyzed.

Still, Bauby was determined to write. Using only his lucid mind and one eye, he began working on his memoir, "The Diving Bell and the Butterfly." Each night, he'd lie awake editing and re-editing the story in his mind, memorizing every paragraph as he hoped to relay it.

By day, his transcriber would recite the alphabet to him over and over. When she reached a letter Bauby desired, he'd wink. Each word took about two minutes to produce, and during the course of a year, Bauby managed to tell his story of life in paralysis. His moving and often funny prose won critical acclaim, and "The Diving Bell and the Butterfly" became a bestseller throughout Europe.

Sadly, Bauby died of pneumonia in 1997, soon after the first edition was published in France. He missed not only the English translation, but also the award-winning film adaptation released in 2007.

3. The poetry of speed
"Transcendence-Perfection" by Sri Chinmoy

His poems won numerous awards and inspired countless writers and musicians. And while Sri Chinmoy was clearly a fast writer, he was never as quick as on November 1, 1975, when he wrote "Transcendence-Perfection," a collection of 843 poems -- all written in 24 hours.

How was Sri Chinmoy so prolific? He believed the key was meditation. As he once explained, "The outer mind is like the surface of the sea. On the surface, the sea is full of waves and surges ... But when we dive deep below, the same sea is all peace, calmness and quiet, and there we find the source of creativity."

Etymologist David Shulman was a true lover of words. One of the most prolific contributors to the Oxford English Dictionary, Shulman tracked down the roots of Americanisms for more than 70 years. But those weren't Shulman's only contributions to the world.

During World War II, he served in the army and used his language skills to crack Japanese codes. His most astonishing feat as a wordsmith, however, occurred in 1936, when he composed the sonnet "Washington Crossing the Delaware."

What makes the poem so remarkable is that every one of Shulman's 14 lines is an anagram of the title. What's more, the lines are rhyming couplets, and they tell a story, more or less. Here's an excerpt:

As poetry, it isn't exactly Walt Whitman. But then, Whitman was never this good with anagrams.

According to legend, Ernest Hemingway created the shortest short story ever told. While having lunch at New York City's famous Algonquin Round Table, Hemingway bragged that he could write a captivating tale -- complete with beginning, middle, and end -- in only six words.

His fellow writers refused to believe it, each betting $10 that he couldn't do it. Hemingway quickly scribbled six words down on a napkin and passed it around. As each writer read the napkin, they conceded he'd won. Those six words? "For sale. Baby shoes. Never worn."

While the anecdote may be apocryphal, whoever did write "Baby Shoes" has forced writers forever after to consider the economy of words. Today, the work has inspired countless six-word memoir and story competitions, proving that a story's brevity is no limit to its power.

6. The story of youth
"The Young Visiters" by Daisy Ashford

Daisy Ashford's novella about Victorian society is considered something of a classic. First published in 1919, the work is still in print and has been turned into a movie. But if that doesn't sound remarkable, consider that Ashford was only 9 years old when she wrote it.

To preserve the authenticity of the story, publishers decided to leave in Ashford's plentiful grammar mistakes and spelling errors (the title, for example). They also added a foreword by Peter Pan author J.M. Barrie to assure readers that this was no hoax. Barrie reminded people that the novel was indeed written by a little girl, who was "hauled off to bed every evening at six."

7. The most visionary story ever told
"Futility" by Morgan Robertson

Occasionally, literature is prophetic. H.G. Wells' stories, for instance, predicted video recordings, portable television, aerial bombings, and a Second World War starting in 1940 (only one year late). And a 1941 comic book written by Gil Fox described the bombing of Pearl Harbor in surprising detail, precisely one month before it happened.

But perhaps the most meticulously prophetic work of literature is Morgan Robertson's short and poorly written novel, "Futility." In it, Robertson describes the maiden voyage of a British luxury liner called the Titan, which claims to be unsinkable, but sinks anyway after hitting an iceberg. Nearly every detail resembles the story of the Titanic. Of course, nobody thought about that when "Futility" was released in 1898, a full 14 years before the Titanic set sail.

"Futility" wasn't Robertson's only prescient piece of literature. In 1912, three years before his death, he wrote "Beyond the Spectrum." Much like Gil Fox's tale, Robertson's story predicted a Japanese sneak attack on an American fleet in Hawaii, and the resulting war between the two countries.

Although "Anguish Languish" is playful, there was also a serious side to it. As a French professor, Chace used the stories to illustrate that, in spoken English, intonation is almost as important to the meaning as the words themselves.

James Joyce wrote his final novel, "Finnegans Wake," during a 17-year period in Paris, finishing the work just two years before his death in 1941. During that time, Joyce was nearly blind, so he dictated his stream-of-consciousness prose to his friend, Samuel Beckett. That led to some unexpected results.

For example, during one session, Joyce heard a knock at the door, which was too quiet for Beckett to perceive. Joyce yelled to the visitor, "Come in!" so Beckett added "Come in!" to the manuscript. When Beckett later read the passage back to Joyce, the author decided that he liked it better that way.

After several such sessions, "Finnegans Wake" became one of the most impenetrable works of English literature. But the experience didn't just affect Joyce's novel; it seemed to have a lasting effect on Beckett's writing, as well. Beckett would go on to become a leading playwright in the Theatre of the Absurd, where his characters often spent their entire time on stage sitting in the middle of nowhere, hoping that someone would hear their voice.

10. The art of writing by committee
"The President's Mystery Story" by Franklin Roosevelt and seven other novelists

Many American presidents have written books, but only Franklin Roosevelt has contributed to a mystery novel. At a White House dinner in 1935, Roosevelt pitched his story idea to author Fulton Oursler. Roosevelt's tale started like this: A man named Jim Blake is trapped in a stale marriage and a boring job. He dreams of running off with $5 million and starting over with a new identity.

Unfortunately, the President hadn't worked out one major plot point: How does a man with $5 million disappear without being traced?

To solve the problem, Oursler formed a committee of five other top mystery writers: Rupert Hughes, Samuel Hopkins Adams, Rita Weiman, S. S. Van Dine, and John Erskine. Each author wrote a chapter and ended it with Jim Blake in a terrible situation, which the next author was left to resolve. Despite being the work of a Washington committee, the end result was surprisingly successful. "The President's Mystery Story" was serialized in a magazine, published as a book, and even turned into a movie in 1936.

Yet, the writers never came up with a solution to Roosevelt's original problem. That didn't happen until 1967, when Erle Stanley Gardner wrote a final chapter to a new edition of the book. In it, the secret to Jim Blake's mysterious disappearance is discovered by Gardner's most famous character, Perry Mason.