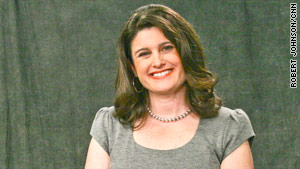 (CNN) -- Tracy McMillan has gotten under my single-status skin.

I'm not sure how it took nearly a week for her Huffington Post column, "Why You're Not Married," to land in front of me, but it finally did. And now I'm fired up -- not in an angry way but in the sort of way that made me skip to my desk, excited to type.

To hear it from the thrice-divorced McMillan, I'm 41 and not married because of one (or more?) of six reasons: I'm a bitch, a slut, a liar, shallow, selfish or not good enough.

Wow. Is that all? Maybe I smell, too.

I'll be the first to admit I've got issues (c'mon, who doesn't?), but I'm not owning these. Perhaps she was talking about why her own marriages failed or was simply setting out to get a rise, which she did brilliantly. And while I've been guilty of occasional transgressions that might fit in some of those unflattering boxes, McMillan doesn't touch why I'm not married.

Based on the buzz surrounding her conversation-starting piece, I'm laying down and lining up behind reason number seven: Life happens.

Before reading on, know that I am not and refuse to be woe-is-me. Like Jennifer Aniston, minus the killer body and bank account, I'm happy. Really, I am. I skipped to my desk, dammit.

Of course I'd love to meet and marry that one and only, but in the meantime I'm living my life, and I'm taking everything that's been given me on the journey.

Maybe you spent your adolescence clashing with a stepfather who didn't get you emotionally. And maybe the father who did get you had been relegated by the courts, when you were 2 and your parents divorced, to every-other-weekend access. Maybe your first love cheated on you, just around the time a second divorce rolled through your family. So maybe your faith in men and marriage was a little shaken before you teased your hair for the prom.

But that's nothing some therapy and better hair sense can't fix, right?

Maybe you're a searcher with a healthy dose of wanderlust, someone who needed time to commit to furniture, let alone a man, because there was so much you needed to see, do and become.

Maybe you were and still are a hopeful (I refuse to say hopeless) romantic who for years held a candle for the one you thought was The One. He'd changed your life, after all, when he lured you to Israel (though it could have been Thailand, for all you cared) -- allowing you to claim that Jewish side of yourself you'd never embraced before.

And maybe he slipped and called you his soul mate at one point, a statement you caught and remembered. So even after you read the diary he'd left out, oops, learned about the Brazilian woman with amazing eyes, broke up and dated others, you still held out hope for him. You stupidly took the crumbs he tossed you from time to time and thought they had meaning. Finally, you got through your thick noggin that the guy just wasn't that into you. Hell, he wasn't even all that nice to you. You learned he wasn't the one who got away. He was the one who got in the way.

Then, maybe you met the one who was that into you. He loved and respected you like no man had before. And the dog -- how could you not fall for the man and his dog? One day, while taking a break from kayaking, when you least expected it, maybe he pulled out a ring and asked you to marry him.

Maybe you said yes but then freaked out. You couldn't eat dinner, and you love dinner. Maybe you snuck out of the B&B in the middle of the night. You found a pay phone and called your father, with whom you'd grown profoundly close, sobbing. Maybe you were seized by fear. But everyone around you, including your therapist, said they expected nothing less, given your family history. They even said it would be weird if you didn't freak out. So you were engaged to be married.

But maybe after you moved to a new state and settled into engaged life, you still worried. That fear, that inkling that something was missing or wrong, grew stronger. Maybe you became a genius at dodging wedding questions. Maybe you lost countless hours of sleep, watching him and the dog as they slept peacefully, struggling with what you felt. You didn't want to quit the race, but at some point you knew with painful clarity there was a hurdle you two couldn't clear. So maybe, out of your love for him and yourself, you handed back the ring and left. Maybe you wished you could share custody of the dog.

Maybe, even as you licked those wounds in your pathetic little apartment, you began to appreciate your courage. You learned to trust yourself more. You realized your past didn't define your future; you did. And then, maybe when you were finally prepared to date again, you woke up a single Jew living in Utah.

But being a single Jew in Utah wouldn't matter, because then life tossed you a doozy that put the pain of a called-off engagement to shame.

Maybe you suddenly lost your father. Being emotionally available for someone else wasn't something you could even entertain. Now you had an excuse not to date.

But maybe you knew that your dad -- not to mention your amazing mom and stepmom, and your now-gentler ex-stepdad -- wanted nothing more than for you to love and be loved. So when you were ready, with a fresh start in a new city, you were excited to put yourself out there again.

Maybe you were approaching 40 when you arrived in the South. Maybe you were slapped across the face with the reminder that most people your age are married with children. Maybe you went to a singles event and became convinced you were the oldest one there, so you ducked out early.

But maybe you held onto hope and optimism. You sucked up your pride and whipped up an online dating profile. You found out that men in Belgium, as well as men with odd fetishes and offensively bad grammar and spelling, have a thing for you. You received horrifying -- yet hysterical -- notes from suitors that made for great Facebook status updates.

Maybe you agreed to go on dates you dreaded because you were determined to have an open mind. Maybe you learned you had good reasons to dread those dates. You wolfed down a nice piece of salmon as one man told you, within the first hour of meeting, that he cheated on his wife, still loves his ex-girlfriend and didn't go to his own father's funeral. Maybe you thought you should charge him for therapy.

But maybe you still believe there's someone great out there for you. You're ready, you know you have so much to give, and you look forward to meeting him -- wherever and whenever that might be.

And in the meantime, you know you have a lot to be grateful for. Maybe you have a career you love, and through the stories of suffering you hear, you know that if still being single is your biggest problem, you are damn lucky.

Sure, you might be a bitch, a slut, a liar, shallow, selfish or not good enough. Maybe, though, you happen to be 41 and single because life, real life with all its complications, has just worked out that way. So far.

But, hey, what do I know? Maybe that's just me.