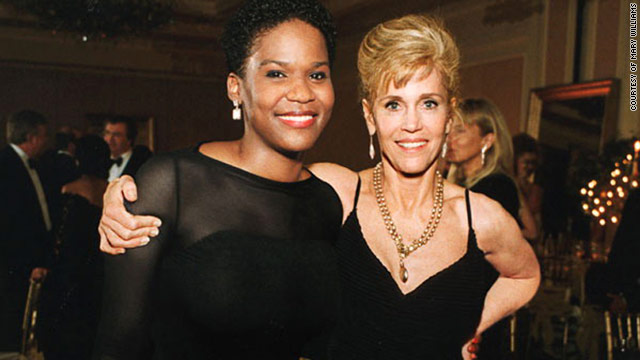 Mary Williams left her birth family when she was 14 to live with Jane Fonda.
STORY HIGHLIGHTS
RELATED TOPICS

(Oprah.com) -- I am about to attempt time travel.

Once I pass through airport security and board US Airways flight 2748 to Oakland, California, I will be transported to a place I fled nearly 30 years ago. Although I have taken on physical challenges, like a cross-country bicycle ride and a five-month stint on a research base in Antarctica, I have generally shied away from emotional ones.

Six years ago I quit my well-paying job, left my fiancé and sold my three-bedroom home in Atlanta, abandoning a life of materialism and attachment to pursue one that included solitude, travel, and adventure.

Now 43, I spend half the year working all over the country for federal parks and nonprofits, doing odd jobs like manning a visitor center, clearing trails, or assisting researchers. So I often live in constrained quarters with an assorted lot of scientists, dreamers, and vagabonds.

Although the Internet connects me to the outside world, I was hesitant to try Facebook. But after a colleague at an Alaskan wildlife refuge introduced me to the site, insisting that with my reclusive lifestyle it would be the ideal way to stay in touch, I decided to give it a shot.

That's how I found Neome Banks, someone I haven't seen since childhood. And that's why I'm headed back to Oakland. I want to see the place that formed me, find the people I left behind.

Neome and I grew up in the heart of the violent and frenzied Black Power movement. As members of the Black Panther Party -- an organization founded in Oakland during the mid-1960s to stop police brutality toward African-Americans -- our parents tried to help those who lacked employment, education and healthcare. Revolution was a day-to-day reality resulting in bloody shoot-outs between the police and, well, us.

I was a toddler when my father was sent to San Quentin prison after he led the cops on a high-speed chase while hurling Molotov cocktails. At first, my mother took me and my five siblings on long bus rides to visit him. But after a few months the trips ended, as did our relationship with our father.

My mother quit the Panthers when I was 6. I learned about this at the community school when one of the administrators called me out of class and informed me I wouldn't be coming back. Ever. She handed me a sack lunch and sent me on my way.

Overnight, my family shrank from a community of Panthers to my four older sisters, one younger brother, and our mother. Without the support of her husband, my mother struggled with paying bills and finding employment. She enrolled in trade school to become a welder.

Circumstances shifted again after my mother injured her knee at work and lost her job. Devastated by the loss of her hard-won independence, she went on welfare, and morphed into someone I did not recognize. Once funny, loving and vibrant, she became a zombie.

She sat alone on the couch in our living room for hours crying, drinking, and listening to blues albums by B.B. King and Bobby "Blue" Bland. Slip-ups that might have merited light chastising, like spilling a drink or forgetting to do a chore, became offenses worthy of a beating.

So when the opportunity came for me to get away from home one summer, I grabbed it.

At age 11, I boarded a Greyhound bus bound for Santa Barbara to attend Jane Fonda's summer camp. She and her (then) husband, Tom Hayden, supported the Black Panthers, and had met my uncle through Party channels.

Until I attended Laurel Springs Children's Camp, nestled 2,800 feet above sea level, with spectacular views of Los Padres National Forest and the Pacific Ocean, I had not known I was poor. I brought a light jacket, one pair of pants, two shirts, and a pair of shorts that doubled as a swimsuit when worn with a T-shirt. Toiletries? A bar of Irish Spring soap, a worn-out toothbrush, and an Afro pick.

I returned to Laurel Springs for several summers, and I got to know Jane. Smiley and chatty, she often wore snug sweatpants and a T-shirt baring her toned midriff, her hair bouncing and behaving. She invited me to her cottage for lunch and coached me on monologues.

She focused on me, taking in everything I said as if it were the most fascinating thing she had ever heard. She hugged me whenever we met, held my hand when we walked together, scratched my back when we sat next to one another. This touch, this healthy loving touch, was a revelation.

Our family had shriveled like rancid fruit in summer heat. One of my older sisters developed an addiction to crack and turned to prostitution; another just drove off with her young daughter and a boyfriend. My mother was occupied with her own demons.

When Jane Fonda offered to let me live with her in 1982, I left East Oakland for good. Although she was not technically my legal guardian, we ran into zero trouble; when you're with Jane Fonda, red tape tends to fall away.

From our small run-down home in turbulent East Oakland, I moved to Jane's hacienda surrounded by gardens and avocado trees in Santa Monica. She sat me down soon after I arrived and said, "I see you as my daughter now. If you want, you can call me Mom."

I also had new siblings, a little brother named Troy, and two sisters, Vanessa and Nathalie. I was worlds away from discussing Michael Jackson, neighborhood happenings, and boys back in Neome's bedroom. Landing on the moon would have been less disorienting. Everything was new.

Oprah.com: Jane Fonda on her life so far

In her Facebook photo, Neome Banks still closely resembles the young girl I knew. I click on "Add as friend," and, across space and time, she accepts my friendship. Again.

Through our correspondence I learn that Neome is still in touch with one of my birth sisters, Teresa, who is also on Facebook. And so, after typing in Teresa's name and seeing her picture pop up, I friend my sister, too. Just like that, we close the void.

Teresa and I begin sending each other Facebook messages and e-mails: She tells me she's recently divorced but happy, and lives alone in a modest apartment by the sea; her daughter is now a tall young woman with long black hair and severe bangs. Then we reminisce about our family -- a great-aunt who covered her sofas in thick plastic and displayed a candy dish full of mock sweets, another aunt whose house always smelled of chitterlings, and our mother's father, "China," who resembled the Buddha.

She tells me our mother has stopped drinking, and that they take cruises together. She e-mails a photo of them on the deck of a cruise ship. Our mother is plump, dressed in a purple pantsuit paired with a loose pink blouse, sitting on a red mobility scooter. Her close-cropped hair is now gray, but her face is unlined. Though she doesn't smile, she looks fiercely happy sitting there in the sun on the deck of a ship headed for Mexico. My sister kneels next to her smiling a smile not unlike my own. Her hand rests on our mother's arm.

Seeing this picture makes me weep. My mother looks vulnerable, but regal, so different from the woman I remember. I fantasize about forging a new relationship with her and Teresa. We could travel together. We could recapture the good times before our family fell apart.

I want to visit, I tell my sister. Considering the lives they have now, and how they appear so unlike the childhood snapshots in my head, I open my mind to a new possibility: What if my mother's decision to let me go was a gift? I was 14 years old and a minor when I went to live with Jane. She could have revoked and legally challenged the situation at any time. But she didn't.

As a child, I both feared the day she'd drag me back and resented her for not staking a claim on me. I had grown up thinking she didn't care. But now I wonder: What if, seeing her other daughters struggle with drugs, teen pregnancy, and abusive relationships, my mother was relieved that her youngest had happened upon a way out? What if the woman who had given me life had also given me a shot at a better life?

Oprah.com: Once pregnancy, four mothers, two fathers and an army of lawyers

After I accepted Teresa's offer of a place to stay, we had a heated e-mail exchange. Defiantly, she withdrew her invitation. She wrote that she was angry with me for turning my back on our family. The night I left, I sent her one last e-mail, letting her know the dates of my trip and giving her my cell phone number in case she changed her mind.

The clear, warm beauty of the Oakland weather belies the storm brewing in me. I'm waiting to meet Neome at the train station when I see her approaching on foot with a small boy. She recognizes me instantly and we embrace. She is tiny, thin, and not much taller than she was as a young teen. She still possesses flawless ebony skin and a radiant smile.

Teresa waited until the last day of my trip to call, which pisses me off.

"Funny how our voices sound alike."

"Well, I was just checking in."

A few weeks after my Oakland trip, I am heading out to spend Christmas with my Fonda family. After Ted and my mom divorced in 2001, we started spending the holidays at a ranch she bought in New Mexico. But this year we are celebrating in Los Angeles, because my mother has a new boyfriend -- Richard, a record producer who lives in the Hollywood Hills.

Time travel is tricky. You can't return without bringing something back or leaving part of yourself behind. I still feel the presence of my birth family like a ghost. No matter where I end up, I'll always have my families.

And while I might reach out to Teresa again, right now knowing she's out there is enough. In the meantime, I do what anyone in my position would do -- I take to the dance floor and do the Jane Fonda.