New bible of slang is published 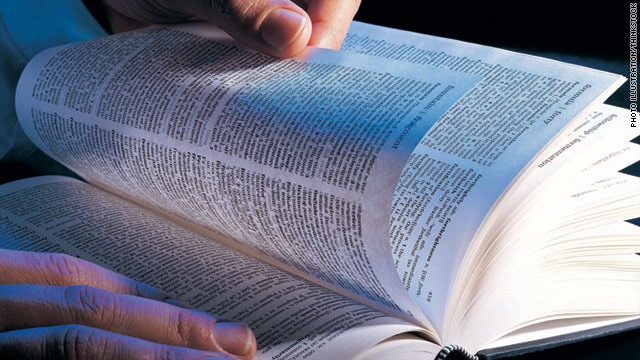 (Good.is) -- By far, my greatest interests in life are words and humor. I'm obsessed with both, which is why my favorite comedian is the late George Carlin -- the funny man most obsessed with how we talk. Nothing has ever floated the boats of my two obsessions more than a good Carlin DVD or book.

The publication of "Green's Dictionary of Slang" -- a product of 17 years of work that make it the largest slang dictionary ever published in English -- is a glorious event for anyone who loves words and likes to laugh.

Covering slang from the United States to England, New Zealand, and beyond, Jonathon "Mr. Slang" Green records and documents more than 100,000 words and idioms in an OED-like, quotation-packed historical dictionary. Those terms range from the crude ("sweat bird turds," meaning "work hard") to the subtle ("give someone the mitten" -- end a relationship) and everywhere in between.

As Green says, slang is "...vibrant, creative, witty, and open to seemingly infinite re-invention. It is voyeuristic, amoral, libertarian, and libertine. It is vicious. It is cruel. It is self-indulgent. It is funny. It is fun." So is this dictionary.

Folks have struggled to define slang for centuries. One of the most accepted definitions is "Historical Dictionary of American Slang" editor Jonathan Lighter's claim -- "The aim and chief function of slang is to lower and disavow the dignity of discourse."

Michael Adams -- author of "Slang: The People's Poetry" -- offers a complementary view: "... it's not just that slang lowers dignity, but that dignity is under criticism in slang ... To the extent that everyday speech is boring, slang is meant to elevate discourse, not lower it."

As for Jonathon Green, in the intro to his massive new dictionary, he writes, "I would call slang a 'counter-language,' the desire of human beings, when faced by a standard version, of whatever that might be, to come up with something different, perhaps parallel, perhaps oppositional."

That drive to coin words seems as biologically driven as many of the topics slang usually names. As Green notes, "...the basic concerns remain consistent in slang as they do in much that is human: sex, money, intoxication, fear (of others), aggrandizement (of oneself)."

Within any of those topics, the range of vocabulary is astounding. Take sex. One my favorite euphemisms -- "Ugandan discussion" -- is included, as well as many variations on themes, such as "playing." You can "play at" itch-buttocks, all fours, belly-to-belly, blindman's bluff, bo-peep, fathers and mothers, and handie-dandie.

Good: More college grads are taking nonprofit jobs. But is it just a fad?

You can also play "night baseball," "the first game ever played," or "Mr. Wobbly hides his helmet." The most romantic term might be "bouncing refrigerators." I'm going to add that to the hobbies list on my dating profile immediately.

Beyond sex, the range of terms and types of terms is enough to make your top-hamper (head) spin. There are comic book-y sound effects, like "kerplunk," "kaplunk," and "ka-plonk." There's British rhyming slang, including "Dick Van Dyke" (bike), "two eyes of blue" (too true), and "Meryl Streep" (sleep).

There are indefinite words, such as "thingahoochie" and "thingsmadoodle," plus exclamations like "Holy creeping Jesus!" Pop culture is well-represented, as "go to the mattresses" is traced to Maria Puzo's The Godfather in 1969, and "neo maxi zoom dweebie" was coined in The Breakfast Club in 1985.

College slang appears often, nowhere as blatantly as in "undue perversity" -- a nickname for Purdue University. Speaking of education -- and as a teacher myself -- I love the term "gerund-grinder": an 18th century insult for a schoolteacher. That's not even the tip of the tip of the slangberg: Green's lexical buffet seems to go on forever.

Of course, even the biggest and best slang dictionary ever can't be complete or perfect. I think Lighter's Historical Dictionary of American Slang (HDAS) is a slightly better word book -- in theory, if not fact.

Sadly, that incredible project has never been finished, and what is published is a tad out of date. I was also stunned by some omissions in Green's. How can "assmunch" and "meh" miss the cut when so many obscurities are listed? Then again, I'm sure every English speaker knows some slang terms that didn't get scooped up.

When looking at such a massive, well-documented collection of words, griping about what's missing is a tad ungrateful: like dissing Christina Hendricks for not being voluptuous enough.

It's a shame George Carlin didn't live to see this amazing work, which is awesome in the "causing awe" and "whoa, dude" senses. In addition to his prolific comedy, Carlin was a bit of a lexicographer himself -- Green cites some of Carlin's 2,443 Dirty Words several times.

I bet Carlin would appreciate Green's spin on slang:

"To me its greatest charm is that at its heart, even its most obscene and gutter-dwelling heart, it is subversive. This is not political subversion -- slang is above politics -- but a subversion of the English language itself. And by subverting English, it subverts the givens of the world that English informs."

Carlin, a lifelong subversive and committed atheist, once speculated that his soul might go to a garage in Buffalo. I hope someone finds that garage and sends a copy of Green's massive record of our naughty mother tongue there -- stat. He would love it.