Is West Hollywood losing its mojo? 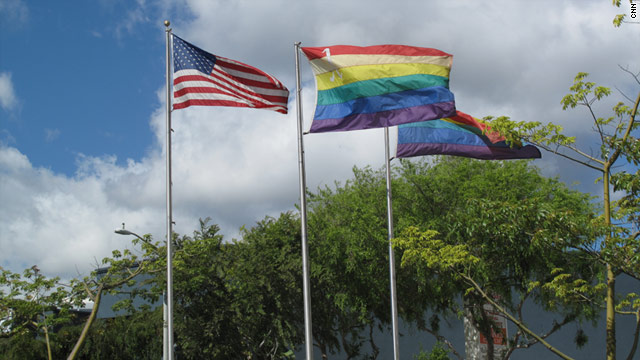 The American flag and the gay pride rainbow flag fly side by side in West Hollywood, California.
STORY HIGHLIGHTS
RELATED TOPICS

West Hollywood, California (CNN) -- From the time it was first incorporated by a group of gay activists, West Hollywood has styled itself as America's gayest city. Throughout the '80s and '90s it was a magnet for young gay men and lesbians looking for a place where they could fit in and be accepted. It was a place of bohemian lifestyles and bold experimentation. It's a town where the American flag and the gay pride rainbow flag fly side by side.

"We founded this city on an ideal that people could come here to remake their lives," says city council candidate John D'Amico. But it is a principal that D'Amico and others believe is slipping away.

Gentrification has become a major issue in Tuesday's city elections. Challengers to three incumbent council members up for re-election say city policies have boosted development, but high rents are squeezing out the young and the innovative.

Lynn Pickwell has lived in West Hollywood for 23 years. She doesn't like some of the changes that she has seen. "The city sold out to developers," according to Pickwell. "They have destroyed old buildings for the construction of million dollar cookie-cutter condos."

The gay bars and dance clubs still line Santa Monica Boulevard. And the Sunset Strip still bristles with rock clubs. But is the city that was once a hipster haven morphing into suburban conformity?

Most of the rough edges that once defined West Hollywood have long since been smoothed over. The notorious gay bath houses and seedy massage parlors are long gone. So too are many of the funky counter-culture boutiques that lent the city a great deal of its charm. In their place one finds fancy day spas, expensive restaurants and upscale merchants.

The gay community is still a force in West Hollywood, but today that community has prospered, aged and settled down. Mayor John Heilman says, "Priorities have shifted."

Heilman believes that West Hollywood may have matured over the last two decades but, "is still a dynamic and vibrant community."

Resident Dave Coerman agrees, "I think its still one of the most liberal and progressive communities around." The 47-year-old Coerman moved his family to West Hollywood just one year ago because, "The city takes good care of its residents, and if it's a little more conservative I don't think that's a bad thing."

But Scott Schmidt, another city council candidate, believes the city is rapidly losing something special. "This community has made a promise to the gay and lesbian community of America that this is your home." And Schmidt says that promise is not being kept because "access is simply not there for young people to move in and revitalize the community."

Others believe that the creative core of the gay community has already moved east, to neighborhoods in Echo Park, Hollywood and Long Beach. "I've seen it before," says Steven Peros. "It happened in the East Village and Alphabet City in New York when those neighborhoods began to become gentrified."

Is West Hollywood losing its mojo? Mayor Heilman says the city is simply aging gracefully. "I wish I could be 24 again, too. But that's just not reality."