Pick a man by his winning culinary style

By Babe Scott, Special to CNN 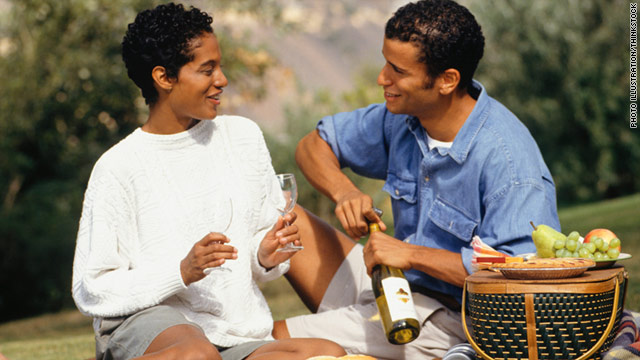 A man who packs a delicious picnic for two is someone who will invest in romance, author says.
STORY HIGHLIGHTS
RELATED TOPICS

Editor's note: Self-declared manthropologist Babe Scott is the author of "Delicious Dating: The Single Girl's Guide to Decoding Men by Their Wining and Dining Styles", that identifies the 10 male dining types and reveals their mating types.

(CNN) -- Spring is the season for new beginnings and budding romances. There are couples canoodling as they dine alfresco outside restaurants everywhere. You can practically smell the sizzling steaks as you stroll down the street. And you can't walk in the park without stumbling on a romantic picnic.

Spring is all about dining in the great outdoors. It's about love and it's about barbecue sauce.

As someone who has dated any number of men who make Al Bundy look like Mario Batali, I should know. My dyspeptic dating disasters inspired me to conduct a study of the male species via their stomachs. I interviewed more than 200 men and women about the connection between a man's wining and dining style and his mating style. I discovered you can divine a man's essence from his culinary style.

But before you fall head-over-Manolos for a likely hunk, consider whether he is likely to give you heartburn.

Now, there is no prescription for love. We each have to find our flavor. Some of us love Budweiser and burgers and others amongst us enjoy being serenaded with fragrant, freshly cooked pasta and piquant pinots.

Whatever our tastes are we should heed what his dining style says about him and consider whether it dovetails to ours. Otherwise, in the long term the relationship may end up being hard to stomach.

Consider if you really want to end up dating someone with the lifestyle habits of Homer Simpson or, for that matter, Charlie "seven-ounce" Sheen. While we often wear rosé-tinted lenses on dates that obscure us from seeing the real man, food doesn't lie.

What he puts on his plate -- and yours for that matter -- creates a very telling portrait of what he will dish up as a partner. And there is no spicier season when it comes to matters of the heart and the hotplate.

Here is a rundown of some of the three most popular spring dining dates and what to watch out for to get an idea if he is the perfect male dish or a recipe for romantic salmonella.

There is nothing that typifies the spring date more than a picnic. It's sunny out, the birds are chirruping and the flowers are budding. The season practically beckons for an outdoor buffet. If a guy suggests a picnic, then I would already give him major points for having romantic inclinations. But there is a vast difference between consuming McDonald's on a park bench than sharing a carefully prepared picnic basket.

If he invited you out for a picnic but forgets the blanket, substitutes beer for bubbly and instead of a restaurant-worthy repast provides a McMeal, then this guy is obviously not going to rate as any sort of gourmet Sir Galahad. He is your typical Homer Simpson type. No doubt you will find that he hasn't forgotten the cold brew: this type's solution to everything, including global warming. If you want to spend your life fetching his beers and vacuuming under his feet then he may suit you but if you want a guy who isn't domestically challenged then I would keep on shopping for a man with a well-packed lunchbox.

Conversely, if your date packs a romantic meal for two: think shared nibblies, cold chicken, bubbly and even a salad, then this speaks volumes. This guy is someone who will invest in romance -- not just now but in the future. It also reveals that he has enough logistical skill to orchestrate dinner and enough motivation that you won't have to sandblast him off the couch to attend to culinary matters. This guy understands the power of food to forge moments. This goes double if he brought dessert.

The barbecue is where the culinary world and unbridled masculinity meet. I don't think there is a stronger symbol of sexiness than a man at the helm of a bristling hot grill, especially when said man knows what he's doing. I could easily flip for a guy who can flip a filet mignon. If this man can also hustle up some grilled veggies, a salad and a bottle of good wine then the date is in the bag, or at least in my book.

The guy who can't wait to show you his skills behind a hot griddle, is your Steak and Two Veg type. A dining traditionalist who might have varying degrees of gourmet sophistication but he is generally a provider and a protector. There is something incredibly primal that bespeaks to our origins as hunter-gatherers about the barbecue. And there is nothing like the open flame to get some sparks flying. If a guy shows competency at the hot coals, then no doubt he will be a keeper.

On the converse, if you can't coax your guy away from his remote control to tend to the burning coals, then he may not only suffer the risk of vitamin D deficiency, but will likely not be much of a handyman or a helper around the house, and not to mention he will probably not even have a license to drive a hot plate.

Alfresco or at Home

You would have to be Boo Radley or an agoraphobe to want to dine at home all spring. If a guy only wants to stay indoors then it means one of two things: either he has silverfish in his wallet (as he uses it so infrequently) or he is allergic to sunlight. Neither are attractive options. This guy may be a Gourmet Gigolo who wants to eat you out of house and home, waiting like a Venus Flytrap for you to feed him.

Even if a guy is a superstar chef, if he gives a kebab about courtship he will try and serenade you with at least a couple of alfresco restaurant meals. If a man tells you it is just as romantic staying home and eating take out while watching the television, then you know that he is just feeding you a bunch of baloney.

If a guy does take you out, his restaurant and menu choice will reveal realms about him. It is possible to tell if he's adventurous or conservative or somewhere in between. Notice if he is a sharer or covetous and if he is controlling or carefree from his culinary conduct.

More than that, what about his dining deportment? Some guys wouldn't pour your wine first if both your arms were in a sling. It's easy to tell how solicitous he is or if he's completely oblivious and wouldn't notice if you fell down a manhole.

If you really listen and look with all your senses you can tell a guy's key characteristics from his culinary style. Most importantly, you can tell if he makes you salivate. If a guy doesn't whet your appetite early on when he's putting his best fork forward, it is unlikely he will later on. If you seek the delicious on a date, it is likely you will find a savory suitor.