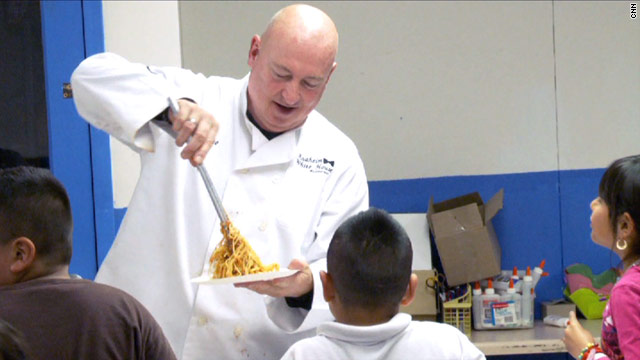 Anaheim, California (CNN) -- In the shadows of Disneyland, often referred to as the "happiest place on Earth," many children are living a reality that's far from carefree.

They are living in cheap motels more commonly associated with drug dealers, prostitutes and illicit affairs.

It's the only option for many families that are struggling financially and can't scrape together a deposit for an apartment. By living week to week in these cramped quarters, they stay one step ahead of homelessness.

"Some people are stuck, they have no money. They need to live in that room," said Bruno Serato, a local chef and restaurateur. "They've lost everything they have. They have no other chance. No choice."

While "motel kids" are found across the United States, the situation is very common in Orange County, California, a wealthy community with high rents and a large number of old motels. In 2009, local authorities estimated that more than 1,000 families lived in these conditions.

When Serato learned that these children often go hungry, he began serving up assistance, one plate at a time. To date, he's served more than 270,000 pasta dinners -- for free -- to those in need.

"Kids should not be suffering," Serato said. "[I had] to do something."

Serato, 55, has always given back to the community where he achieved his American dream. When the Italian immigrant arrived in the U.S. 30 years ago, his poor English skills forced him to settle for a job as a dishwasher. But within five years, he had become chef and owner of the Anaheim White House, an Italian restaurant that is now a local hot spot.

In 2003, he created Caterina's Club, which raises money for underprivileged children. The charity is named after Serato's mother, who taught him how to cook at the family's trattoria in Verona, Italy.

Video: Life of a 'motel kid'

When she came to California in 2005 to visit her son, he took her to the local Boys & Girls Club, the main recipient of the charity's funds. There, they saw a small boy eating a bag of potato chips and learned that this snack was his supper.

Bruno said his mother was shocked by the boy's meager meal. She had raised seven children and always made sure food was on the dinner table, even during the lean years after World War II.

The Seratos found out that the boy lived in a motel with his family. The situation was so common in the area that the Anaheim Boys & Girls Club had a "motel kids" program, where vans pick up the children after school and drop them off at the motels every night. While these children receive free breakfast and lunch through school programs, their parents often don't have the resources to give them dinner.

Caterina found it unacceptable that the children would go to bed without supper. Speaking in rapid Italian, she made her feelings clear to her son.

"Mom said, 'Bruno, you must feed them the pasta!' " Serato recalled.

When he discovered that this meant feeding around 70 children, he demurred. But his mother insisted. He went back to his restaurant and prepared 70 pasta dinners to serve at the club.

His mother helped him that first night, and Serato has maintained the ritual nearly every night for more than six years -- even through the recession.

The economic downturn was a challenge, though. Serato lost 30% to 40% of his customers, and the number of children he fed each night more than doubled. He often found himself giving away more meals than he served in his restaurant, and he was forced to refinance his home to keep going. But Serato found that his work with the children helped sustain him, at least on a personal level.

Today, Serato's business has rebounded, and his program feeds nearly 200 children, in two locations, seven days a week. He also pays for drivers to transport the kids to the Boys & Girls Club, and he has purchased another van. All told, he estimates that the endeavor costs him around $2,000 a month.

Michael Baker, the executive director of the Anaheim Boys & Girls Club, says many of the "motel kids" he serves depend on Serato's meals. He also relishes the irony of the situation.

"These are some of the poorest kids in Anaheim eating from one of the most exclusive restaurants every night," he said. "I love that!"

Carlos Gomez, 12, has lived in a motel room with his family -- a total of six people -- for almost his entire life. He and his younger brother Anthony often eat Serato's pasta, and his father, Martin, says it's a relief to know that his children can get a free meal.

"I no longer worry as much, about them [coming home] and there being no food," he said. "I know that they eat over there at [the] Boys & Girls Club."

This spring, Serato plans to expand his program to an additional 100 kids a night, and he will partner with another organization to give 100 children three meals a day.

He is also calling on other restaurants around the country to work together to feed "motel kids." He believes that providing just a few dinners a night could make a significant difference.

"Every restaurant in the country -- Chinese, Indian, Mexican, French -- let's do it all together," Serato said. "We would have no hungry children."

Serato's love for the children is clear, but he's quick to give all of the credit to his beloved "mama" back in Italy. Although she suffers from Parkinson's disease, he still talks to her via Skype every morning and believes that if she knew how their work has grown, she would be proud.

Although his mother made him start the work, he now says he could never stop helping the children.

"They're customers," he says with a smile. "My favorite customers."

Want to get involved? Check out the Caterina's Club website at www.thecaterinasclub.org and see how to help.