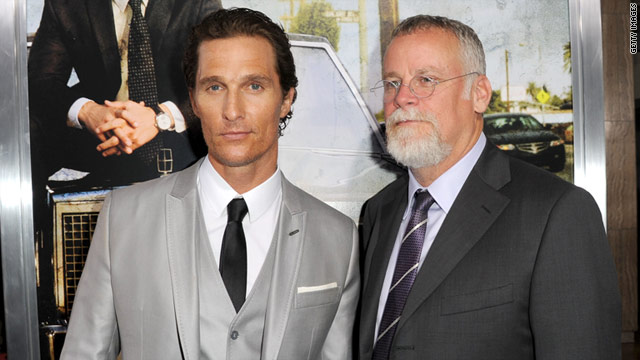 (CNN) -- Michael Connelly's new novel, "The Fifth Witness," is just out and is certain to debut at or near the top of The New York Times best-seller list. This is Connelly's fourth novel featuring fictional criminal defense attorney Mickey Haller.

Already hugely popular with readers, Connelly has seen his sales rise further after "The Lincoln Lawyer," a movie based on his 2005 novel of the same name, hit the big screen last month. It didn't hurt that actor Matthew McConaughey played Haller.

McConaughey thought he would be real-life lawyer

So far, the movie has received generally positive reviews and grossed more than $40 million at the box office.

In addition to his new novel and hit movie, Connelly has a guest-starring role on the ABC TV show, "Castle." He even has his own iPhone app. While business has been good for Connelly, the same can't be said for his fictional hero. With high-priced criminal defense clients few and far between, Haller has turned to fighting foreclosures in "The Fifth Witness."

CNN recently talked to the author about his new book. The following is an edited transcript.

CNN: In "The Fifth Witness," the home foreclosure crisis plays a major part in the story. What drew you to write about this topic?

Connelly: It's kind of strange. In one way I was led to it through my normal research patterns, and then on the other, my interest probably came out of a childhood experience. Since I am not a lawyer, I spend a lot of time with a couple of attorneys when I am researching Mickey Haller stories.

One of these guys had to transition in the last year into foreclosure defense because paid criminal defense was drying up in the down economy. Not a lot of people out there that can pay for an attorney. So what happens with Mickey in this book actually happened with him first.

But as I was going down this path I was reminded of times in my childhood where my parents hit upon hard times because my father was in the volatile construction industry. I remember foreclosure notices being tacked to our front porch and the difficulties involved.

CNN: This is your fourth novel featuring Mickey Haller. How has he changed since you started writing about him?

Connelly: After "Lincoln Lawyer," "Brass Verdict" and "The Reversal," I think Mickey has evolved a bit. I think the character is on a never-ending quest to show his worth to his daughter and ex-wife and I think it is leading him toward some light. He is a man of the law but he also has his own code and I think that is shown in this latest book. I don't want to give anything away but by the end of this book I think we see him heading in a new direction.

CNN: Your story is full of courtroom detail and background on the foreclosure crisis. How do you reach this level of authenticity and was this book more difficult to research?

Connelly: It all comes out of the research and I was lucky, as I said earlier, that one of my main research subjects was going through the same journey I was going to put Mickey on. That gave me access to a lot of anecdotal knowledge of how this very serious issue in our country plays out in courtrooms and in very small ways.

CNN: Fans know your two main characters well, Mickey Haller and Harry Bosch. Even though they are half-brothers, they're very different people on the page. Do you approach writing a Haller novel any differently than a Bosch book?

Connelly: Well, I know that when I write about Harry that I have the empathy of the reader from page one because Harry's mission is so noble. He's out there trying to find killers and who isn't onboard for that?

Mickey is different. The criminal defense attorney is misunderstood if not despised by most of society. It doesn't matter if we believe in our adversarial system and the ideal that everyone charged with a crime is entitled to a vigorous defense. Ideals give away to reality -- defense lawyers working loopholes and angles to get their clients off.

So with Mickey my task is different and I have to find ways of showing his humanity and hope that readers will still want to ride along, even though his mission in life is quite different from Harry Bosch's.

CNN: After 23 best-selling novels, what inspires you? What is the spark that drives you to keep writing?

Connelly: It always comes down to the writing. The fulfillment I get from a good day of writing is addictive and will always bring me back the next day. I'd be lying if I said the success means nothing to me. It does. I enjoy it and live a pretty great life.

But whether anybody believes me or not, I'd be writing these books even if they weren't selling to anybody. Writing brings a very personal level of fulfillment that can't be confused with best-seller lists and movies and all of that.

CNN: What's a typical day of writing like for you? Do you have a schedule, a routine or a ritual when you're working on a book?

Connelly: I like to get up early and get right to it. A good day to me is writing from 6 a.m. 'til noon with a break to take my daughter to school. After lunch, if I still feel the momentum, I'll hit it again.

CNN: You must be pleased with "The Lincoln Lawyer." The filmmakers were true to your story and Matthew McConaughey was praised for his performance as Haller. What did you think of the movie and could we see Harry Bosch on screen sometime soon?

Connelly: I could not be happier with the movie. All involved did a great job and McConaughey stands out with his performance. He nailed Mickey Haller. As far as Harry Bosch goes, I am working on getting him into the hands of filmmakers who will take as much care as these people did with Mickey Haller. Hopefully something will happen sooner rather than later.

CNN: It's been a busy year for you. You have another TV appearance coming up and another novel coming out later this year?

Connelly: I'll be on "Castle" again on Monday, April 11, and then it's back to work on the book for the fall. It's a Harry Bosch book and it's called "The Drop."

Michael Connelly's books have sold 42 million copies worldwide, and his work has been translated into 36 different languages. You can find out more about him at michaelconnelly.com