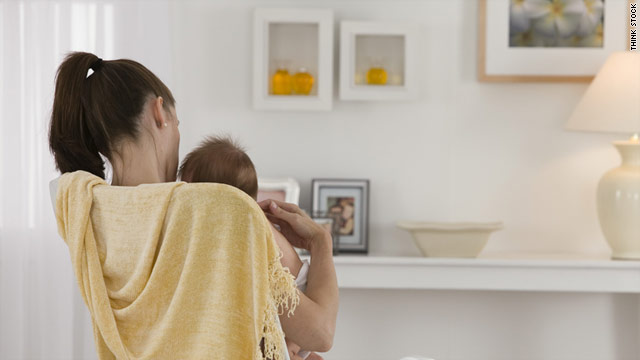 When some stay-at-home moms can't find the right products for their baby, they invent their own.
STORY HIGHLIGHTS
RELATED TOPICS

(Mental Floss) -- With Mother's Day just around the corner, this week seemed like a great time to give a tip of our caps to stay-at-home moms, including these four who used clever ideas to become business moguls.

Gerber: Of course only a mother could found such a successful baby food company! In the late 1920s, Michigan mom Dorothy S. Gerber was hand-straining food for her baby daughter, Sally, when she realized there must be some way to avoid the messy task.

She pointed out to her husband, Daniel, that if his family's business, the Fremont Canning Company, could puree a tomato all day long, its equipment could probably make short work of other fruits and veggies, too.

Daniel Gerber realized his wife was on to something, and after a year of experimentation -- and an extensive search to find the right drawing for their label's now-iconic "Gerber baby" - the Gerbers introduced their first line of baby foods, a super-yummy menu of strained peas, carrots, prunes, and spinach.

Some parents would just accept whatever the market was offering. Not Aigner-Clark. She shot a video for her daughter in her basement then edited it with her husband, Bill, on the family computer. She even doodled a logo for the video at her kitchen table.

Within a year, the first Baby Einstein video was in stores, and the series quickly became a runaway hit. Disney bought the company in 2001 after Baby Einstein raked in $12 million in revenue the previous year.

After the sale Aigner-Clark gave an interview to The New York Times in which she sounded a little surprised by her huge windfall.

"I was just a stay-at-home mom who wanted to expose my daughter to classical music, poetry, not a budding entrepreneur."

Mrs. Fields: Debbi Fields was a young stay-at-home mom when she started to feel restless in 1977. She had always loved baking cookies, so she figured she might try her hand at opening a cookie store.

The concept doesn't sound odd now that there's seemingly a Mrs. Fields outlet in every mall you walk into, but at the time the notion that a store would only sell cookies seemed absurd.

Furthermore, Fields was only 20 years old and didn't have any business experience.

Fields nevertheless managed to secure financing for her venture and she opened up her first cookie shop in Palo Alto, California. Fields and her husband, Randall, soon confirmed their suspicions that people really enjoy cookies and will gladly drop a few bucks to get a warm one.

The company began a sweeping franchising program, and in the 1993 Fields sold her cookie empire to an investment firm.

Mental Floss: People who switched careers after 50 (and thrived)

BabyLegs: Put this one on the list of brilliant niche markets we didn't know existed: baby legwarmers. Nicole Donnelly managed to turn that very idea into a fabulously successful company.

In April 2005 Donnelly found a new weapon in her ongoing battle with her daughter's diaper rashes. By letting her daughter enjoy some of what they called "nakedy butt time," the rash got some much-needed fresh air, but the tot's legs got cold.

Donnelly combatted this chilliness by cutting up a pair of socks to make improvised baby legwarmers.

Donnelly quickly realized that the legwarmers had all sorts of side benefits. They did more than just keep her daughter's legs toasty; they also protected the baby's legs when she crawled and made changing diapers a breeze.

Donnelly whipped up some stylish designs and began selling BabyLegs to other moms.

BabyLegs proved to be an incredibly lucrative idea. In 2008 the company moved over $4 million worth of its legwarmers worldwide, and in April 2009 United Legwear bought a majority stake in the company and began aggressively expanding the company's reach.

Mental Floss: Where do baby carrots come from?

Part of complete coverage on
Best in Life
Plus-sized women: Give us fashion

See the future of men's clothing according to top designers.
Photos: Fancy hats at Royal Ascot

Fancy and fun hats are on parade at the Royal Ascot races in England.
Shoes that are wearable sculptures

Kobi Levi's "shoe creatures" might make you wonder how it's possible to teeter on such high heels.
Sun-blocking new styles

Instead of baking in the sun until turning red as a tomato, more beachgoers are donning wide-brimmed hats, flowing tunics and hiding under large umbrellas.
Coveted collectible home accessories

Invest in these designs now, and the pros say they'll be coveted collectibles one day.
Stay-at-home moms inventions

A tip of our caps to stay-at-home moms, including these four who used clever ideas to become business moguls.
Style from Tokyo to Toronto