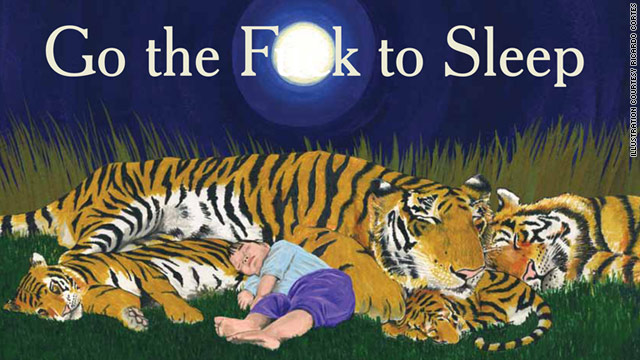 Ricardo Cortés illustrates "Go the F**k to Sleep," and each of its 32 pages is written in the style of a children's picture book.
STORY HIGHLIGHTS
RELATED TOPICS

(CNN) -- Adam Mansbach's toddler wasn't thirsty. She wasn't hungry. And she definitely didn't need Dad to make up another story about farm animals having a picnic and dozing off. The possibility that he would never get to leave her room for dinner or a glass of wine or the world outside became a distinct possibility.

The noted author didn't keep his feelings to himself. Instead, he turned his frustration into writing "Go the F**k to Sleep," a tongue-in-cheek adult bedtime book that has swept the Internet and has already hit No.1 on the Amazon bestseller list a month before its June 14 publication date. Illustrator Ricardo Cortés captures the colorful mood of Mansbach's poetry.

The cubs and the lions are snoring,
Wrapped in a big snuggly heap.
How come you can do all this other great sh*t
But you can't lie the f**k down and sleep?

"Go the F**k to Sleep" hits a nerve with parents who hope for a life after their kids' bedtime. Independent publisher Akashic Books has responded to preorders and overwhelming Internet interest by increasing its first printing to at least 150,000 copies and moving up the publication date from October to June.

The nightly exhaustion is "a frustrating part about something we love very much," said Mansbach, a visiting professor at Rutgers University. "A lot of these frustrations are not permissible to talk about. We're not completely honest because we don't want to be bad parents."

"Looking at parenting books, there are more and more books that are less earnest about raising your child. They help parents step back and laugh at themselves a bit," said Mark Rotella, senior editor at Publishers Weekly and father of a 5- and 2 -year-old.

"It's more like a parenting book for when the parent is inconsolable in the middle of night and frustrated."
--Mark Rotella, senior editor at Publishers Weekly

"It's more like a parenting book for when the parent is inconsolable in the middle of night and frustrated." (Rotella warns parents not to leave the book lying around for children to see, noting that the illustrations are captivating.)

Mansbach, whose novels include "The End of the Jews" and the best-selling "Angry Black White Boy," started out as a poet before writing full-length novels.

Each of his new book's 32 pages is written in the style of a classic children's picture book, but there are two conversations going on: The first two lines are what the parent is saying to the kid; the second half is the internal monologue that is never said.

The eagles who soar through the sky are at rest
And the creatures who crawl, run and creep.
I know you're not thirsty. That's bullsh*t. Stop lying.
Lie the f**k down, my darling, and sleep.

At the end of the day, the child never hears the worst of the parent's frustration.

"The book is all about the obligation of a good parent to internalize the frustration and take the irrational behavior of a child and absorb it oneself," said Akashic Publisher Johnny Temple.

"The book is an outlet for that frustration, but it completely reinforces parents sucking it up and dealing with it. There's never a moment where the kid suffers because of the parent. It's actually pretty idealistic."

A G-rated version appropriate for young children is in the works, inspired by Temple's censored reading of the book to his 3- and 5-year-old children.

"They're aware we struggle every night to get them to sleep, and they get a big kick out of the fact that the book addresses their stall tactics," Temple said.

Has his reading of the book taught his children any empathy for their parents' nightly struggle?

Not at all. The 3-year-old's current tactic is to demand Mom or Dad snuggle to get him to sleep. "And this is after the juice and too many books," Temple said. Even then, it's a gamble to get up. "When you hear his breathing change, can you get out of the bed too early and burn yourself for another 15 minutes?"

The movie rights have been sold to Fox 2000.