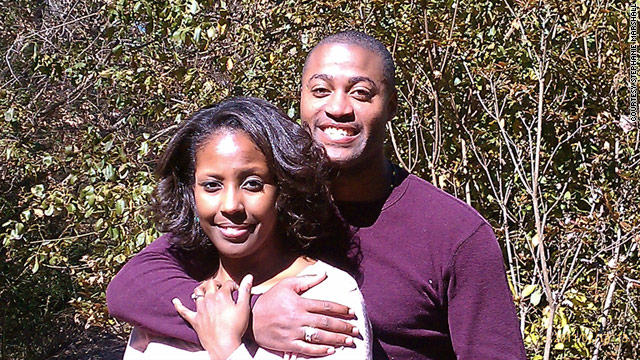 Since the 1990s, the number of cohabitants in the United States, like Stephanie Marshall and Kelton Scott, has doubled.
STORY HIGHLIGHTS
RELATED TOPICS

(CNN) -- Stephanie Marshall and her fiance, Kelton Scott, are college-educated, gainfully employed and living together. They pay their bills separately but "get together on common things like the rent," said Marshall, who just finished medical school in Atlanta.

The couple is part of a growing segment of American couples who choose to cohabit -- and a new report from the Pew Research Center, released Monday, says financially, those couples are making out like bandits compared to their married and single counterparts.

Not only are there more of them today -- the number of cohabiting couples has doubled since the 1990s, according to Pew analysis of U.S. Census numbers -- but they make more money than other segments of college graduates.

"We haven't necessarily combined our income together, but what we're doing is working," said Marshall.

"Working" in more ways than one: Among the college-educated, the study said, in 78% of cohabiting couples, both partners had jobs. For college-educated married couples, only 67% were in two-earner marriages.

The report's findings fly in the face of conventional wisdom that says married people have it better economically than their unmarried counterparts.

"When we started writing this report, we thought that people who were married, and not those just living with each other, would be better off. But that's not the case," said D'Vera Cohn, the study's co-author.

The key is a college degree, Cohn said.

Cohabiting couples without college educations typically fare worse than comparably educated married couples and are on par with the economic means of an adult living without a partner, the study said.

"When college-educated adults live by themselves, they supply a much larger income -- 88% -- of the household than any other group," Cohn said. (Most adults who don't have opposite-sex partners live with other adults or children, according to the Pew report.) "If you're a single person, much if not all of this household income is from your earnings. But if you're living with someone else, that means there's two earners, so there's the potential to increase the earnings and take some of the burden off you."

The income of married couples could be skewed because one of the partners may have left the work force to care for a child, Cohn said.

That would also explain why, according to the report, marriage partners typically had large differences in earnings. Among the college-educated married couples, that difference was as great as $30,000. Meanwhile comparable cohabitants typically each make up 50% of the household income, the study said.

It is that economic balance that has been a plus for Kristen Nicole and Isaac Martin, cohabitants in Mobile, Alabama.

Finances are "definitely a 50-50 thing," said Nicole, a blogger who writes for Time Magazine. "I think it's important to have two people contributing toward a common goal. We're both able to contribute."

"We have a financial plan," she said. "We talk about how finances are split up and pretty much everything so when it comes to decisions like, I want to get a new car, or he wants this or that -- we know how much money we have."

Her boyfriend, Martin, who works in finance, said their relationship is built on the obvious romantic connection, but also from a common bond of practicality. "We just realized that we worked well together," he said. "Separately but equally on our own."

The study also finds that among people without a college education, unmarried adults have "greater economic well-being" than cohabitants.

In essence, two may not better than one, the report suggests, if the partners aren't college-educated. If they are, then the couple makes ends meet more easily, the report said.

"I can believe it," said Kathy Iandoli, a music journalist based in New York.

But Iandoli said as a single woman who is dating but lives alone, she finds the prospect of marriage still seems to offer more security.

"From a female perspective, being married, there's a contractual agreement that you're not going to get ditched very easy," she said. "But when you're just living with someone, you're kind of on your financial tippy-toes because if there's a problem, he could leave at any moment."

"It just seems that as a couple you've got to be on your Ps and Qs or you can get dumped tomorrow. You can get dumped in a marriage, too, but there's more room for a man or woman to make sure that they are equipped financially if the other one just walks out," Iandoli said.

Cohn cautions that the census figures shouldn't be taken as a reflection on the decline of marriage in America. "Americans value marriage highly and want to be married," she said.

The new figures reflect that. While cohabitation among the less educated has led to fewer marriages, among their college-educated counterparts, marriage rates have held steady.

For cohabitants, it isn't all about shacking up just for the economic benefits. Cohn said recent research shows that most couples that live together say they do so with the intention of getting married.

"We asked a survey on this last year," she said. "We asked people living together if they thought of this as a step toward marriage. More than two-thirds said they did, and the numbers increased by income level."

Although no date is set,"we definitely have plans to get married," said Martin, who has been cohabiting with Nicole for one year.

As for Marshall and Scott, they plan to tie the knot in November.