Why family adopted a grown man 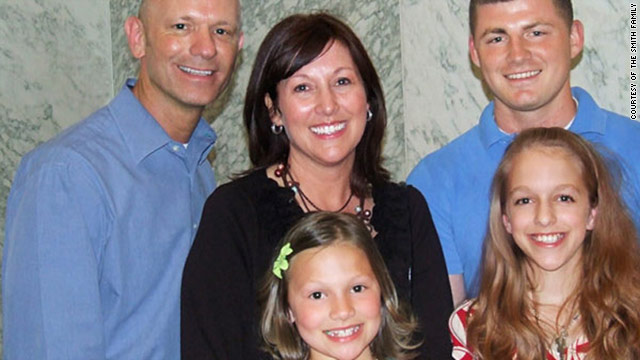 Kerry Smith, Charee Godwin-Smith and their daughters knew Billy for many years before they decided to adopt the young man.
STORY HIGHLIGHTS
RELATED TOPICS

(Oprah.com) -- Charee Godwin-Smith and her husband, Kerry Smith, always wanted to adopt another child. They just never imagined he'd be a 20-something Marine aviation operations specialist.

Charee: When I met Billy, he was 14 and living in a home for abused and neglected children where I was the development director. He had a knack for making me laugh and would stop by my office all the time. We'd talk about everything from his passion for cross-country running to what he wanted to be when he grew up. I think he also liked the candy I kept on my desk.

Billy: From the beginning, I felt I could trust Charee. That had been missing from my life. She made me feel welcome, like she'd always be there for me.

Oprah.com: Take The Trust Test to find out if you know who to trust

Charee: Billy became a fixture at our house. At first it was just Thanksgiving and Christmas. But soon he was babysitting our daughters and bringing home girlfriends to meet us. When he turned 18, we gave him a key and an open invitation to come over whenever he pleased.

Around Christmas of 2009, my mother saw a TV program on adult adoption and asked if we'd ever considered formally adopting Billy. Kerry and I had always planned to have two biological children and adopt one -- we were inspired by a relative's experience -- but of course we pictured a baby, not a 22-year-old man!

And yet it made sense. Billy's mother had passed away when he was 15, and he'd listed me as his next of kin in his paperwork for the Marines. He was already on our family cell phone plan. And our girls, who were then 8 and 11, were thrilled by the prospect of having an official big brother.

Oprah.com: What Oprah knows for sure about family

When I called Billy to ask him to be our son -- he was stationed in North Carolina then -- my words tumbled out so fast I'm amazed he understood me. I told him how much we loved him and that we wanted him to know he was part of our family.

Billy: That phone call was a total shock -- the greatest thing that had ever happened to me. For maybe the first time in my whole life, I felt truly loved.

Charee: Three months later, just before Mother's Day, 2010, we officially became a family of five. You'd never know Billy wasn't an original cast member. He's laid-back, sarcastic, and rolls with the punches, just like us. And the adoption has taught our girls the real meaning of family: It's built on love and experience, not DNA.

Oprah.com: 8 things to never say to an adopted child

Billy: Before, every decision I made, I made it for me. Now I consider what my mom, dad, or sisters might do. There's a sense of belonging to something bigger than myself.

Charee: When Billy was serving in Afghanistan, I lived for the next time we'd get to talk to him. But I sleep better knowing he belonged to us. I feel like our family is complete now.