How the drugs of the 60s changed art

In "Are You Experienced? How Psychedelic Consciousness Transformed Modern Art," Johnson combines interviews and analysis with his own experiences as a stoned art lover to explore psychedelic culture's impact on fine art.

Johnson spoke with CNN about R. Crumb, tripping on the steps of the New Hampshire capitol, and why the term "psychedelic" tends to turn off people in both mainstream and high art circles.

This transcript has been edited for length and clarity.

CNN: Your book asks would art have developed as it did in the past 50 years if psychedelic culture had not been so popular. What did you find out?

Ken Johnson: In the '60s, a lot of people were experimenting with hallucinogenic drugs including marijuana, LSD and everything in between. You had acid rock posters in San Francisco associated with the Grateful Dead and Jefferson Airplane and groups like that.

But my theory is that there were probably a lot of artists that didn't necessarily want to do psychedelic-style art that were still influenced by the experience and created works that don't necessarily look psychedelic in the stereotypical way, but may be conceptually psychedelic or have a kind of philosophical way of looking at the world. 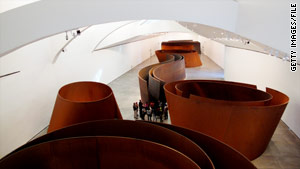 If you look at a lot of different styles in art of the past 50 years, you can see the influence of psychedelics, ranging from sculpture that looks very minimal like Richard Serra's giant, spiral, mazelike structures, to something like Robert Smithson's "Spiral Jetty," there's an interest in having art be experiential...

CNN: Can you elaborate on some features or elements of what you describe of as being "conceptually psychedelic?"

Johnson: I think the main thing is the idea that in psychedelic experience, people start thinking about their own perceptions.

CNN: Are you suggesting that you have to be stoned or high to create art or appreciate modern art?

Johnson: No, I don't think being high or stoned makes anybody more creative. If it did, there would be a lot of stoners out there making great art... I don't think you have to be high to look at it.

I think what it does do, I think any work of art encourages you to imagine your way into a state of consciousness that may not be your normal state, so you kind of suspend disbelief and allow yourself to be imaginatively seduced into a different way of relating to the world so that you study things more carefully, you think about how things are affecting you.

CNN: One might assume that this area of art criticism has been pretty thoroughly addressed. What do you hope to bring to the discussion that's new?

Johnson: People have commented on it here and there, but to my knowledge, nobody's made the claim as extensive as the one I'm making: that psychedelic culture had a really central impact on art beginning in the '60s and really changed the direction of art.

Before this, what I call the "psychedelic revolution," people tended to think of art as something you looked at in a fairly normal state of consciousness, where you looked at art in a museum and you appreciated it and maybe you got excited by it or loved it or hated it, or whatever, but all within sort of normal range of what we think of as consciousness.

Psychedelic culture had a really central impact on art beginning in the '60s and really changed the direction of art.
--Ken Johnson, art critic and author

Basically, people made judgments about art based on whether it was aesthetically good or not... after the '60s making those kinds of distinctions between good and bad art became less interesting, and the standard had more to do with "How does it alter your consciousness? How does it change you and your relationship to the world?"

It's common to take note of it in pop music... Bob Dylan's music changed in the mid-60s and The Beatles changed, and many of them have publicly acknowledged that they were changed by sampling marijuana and LSD. But very few artists in the fine art world that we associate with the Museum of Modern Art and the Whitney Museum and high end galleries in New York, artists in that world have not really acknowledged that so much.

CNN: Were you able to get anyone on the record making that claim for this book?

Johnson: Yes, I spoke with a lot of artists and some of them did, and I quote some of them.

One of my favorite quotes, there's an artist named Deborah Kass, who is known for making very vivid paintings that have to do with feminist politics. They're kind of comical and very punchy in a pop art sort of way.

And she told me that when she was going to art school in the '70s, she tripped on LSD almost every week and she said she felt it was her "moral duty as an artist to take the trip."

CNN: You share many of your own experiences with drugs in the book. What did you hope to convey with those vignettes?

Johnson: In a way, the book has a lot to do with my own autobiography, 'cause I was a teenager from '65 to about the early '70s, those were my formative years. I was a teenager at that time.

I grew up in Maine, which is a little bit far afield from the main centers of psychedelic action, but I was getting it through the media and through records and movies, and so doing this book in a way was going back to, for myself, to understanding how I was formed by the period.

And in some ways, I think that my formation was fairly typical of my generation. So that's why I wanted to make it personal.

Another thing is that a lot of art criticism is written out of a voice of objective authority and I often wonder, when I'm reading art criticism, how did this person get to this point? What's the lived experience that is the background for what this critic is saying? It's not common in art historical writing and art criticism to read that and I wanted to make that part of the story I was trying to tell.

CNN: Which artists would you point to as pioneers of this movement you're describing? Or did the movement or psychedelic culture create the artists?

Johnson: Sort of a chicken-and-egg thing, isn't it? 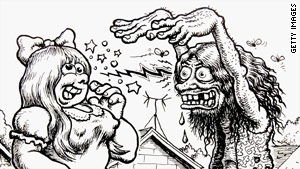 Well, I talk about R. Crumb, for one, and the whole underground Comix movement that began in various places, but probably its most visible place was San Francisco, where R. Crumb and S. Clay Wilson and others, Robert Williams, founded Zap Comix, which was an underground kind of publication, but spread throughout the youth culture very quickly.

I was going to college on the East Coast and discovered Zap comics as a freshman in 1971, and I found them amazing, because they were so explicitly sexual, even almost pornographic, often very violent, often very open about impolite attitudes about sex and class and race.

So, that phenomenon, you would think, would have just stayed underground, but as time went on, the influence of that kind of work was felt more and more in the art world, I think.

Johnson: Well, post-modern has been the default term for art since the mid- to late '60s and it's usually thought of as synonymous with pluralism. It's a period during which many different styles have proliferated, from super-real painting to minimalist sculpture, including video, photography that rivals painting in its scale and ambition.

Prior to that, in the 60s, there were really just three main movements considered to be of significance: minimalism, pop art and color field painting. And in the '50s, according to the art historians, the only important movement was abstract expressionism.

So, where art splinters into a lot of different directions without one predominating over all others, is usually what's thought of as post-modernism... I think psychedelic experience makes you think that there are multiple realities, that there isn't just this one normal real world to which we're supposed to conform, but that the reality changes depending on the state of consciousness that we're in when we're experiencing it. So, any different kind of art kind of posits a different reality.

CNN: What excites you about modern art right now? 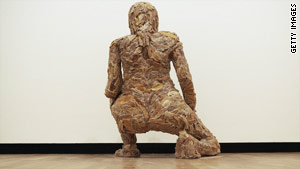 Johnson: I think the artist who's probably getting the most buzz right now is a young artist named Ryan Trecartin, who is a video artist who has a show at P.S. 1 in New York, a big show of his videos, which I mention in the book...

And I think he fits into the paradigm I'm describing about consciousness and multiple realities and the existential flux that psychedelics suggest. I don't know that he would describe his work as psychedelic, it's not a term that has a lot of respect in art criticism these days. I almost wish there was another term for what I'm talking about.

CNN: How has the term acquired a negative connotation?

Johnson: I remember when I first started working on the book I ran into an art historian at an opening a few years ago and I said, "I'm starting to write a book on the influence of psychedelics on art."

And he kind of smirked and said, "Well, psychedelic art is good if you're on psychedelics."

I think the common thought was that there is or has been this genre of the psychedelic poster or fantasy, the kinds of things that put psychedelic culture in this kind of niche that didn't have any kind of highbrow cachet.

So it has a stigma that people are not eager to embrace or associate themselves with. Also, these drugs are all illegal -- especially in the '60s and '70s, they were highly illegal ...

There's been kind of a resurgence. This whole psychedelic thing is still part of our culture. It's not over. There are people who are doing research into different psychedelics for their possible medicinal benefits.

I was just reading ... that the New York Public Library paid $900,000 for Timothy Leary's papers, which is a great trove of information for all the famous people who were corresponding with him and talking about psychedelics. So, it's a very rich history and it's not over.