When spouse gets sick -- who leaves? 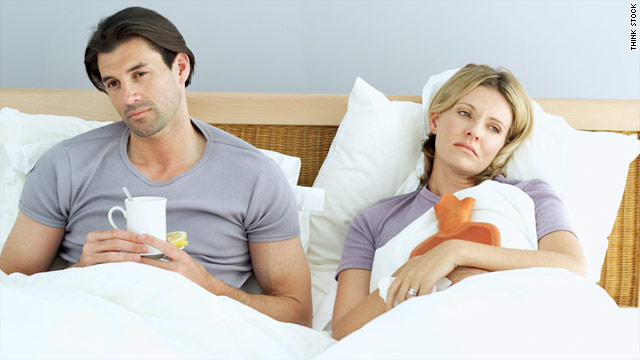 The marriages of newlyweds are more vulnerable when a spouse is diagnosed with a disease, a study found.
STORY HIGHLIGHTS
RELATED TOPICS

(Oprah.com) -- At 31, Cassidy Walsh was ready to begin a fulfilling new chapter. She and her husband, Pete, had just escaped from Los Angeles to a smaller city up the coast, hoping to slow down their lives and start a family. She was a landscape designer and singer; he was a handsome tech entrepreneur. To friends, they were the perfect couple.

Which is why it felt like a particularly bad dream when a seemingly happy result on an at-home pregnancy test led to the discovery of a tumor on Cassidy's right ovary that was secreting the pregnancy hormone HCG (human chorionic gonadotropin).

Before unpacking, she underwent two surgeries -- the first to remove the affected ovary, the second to inspect the other. A rare form of ovarian cancer had suddenly made her dream of becoming a mother seem unattainable. Cassidy had no idea it would take her marriage, too.

In the beginning, "Pete was Florence Nightingale," she says, nursing her through recovery after surgery, carefully massaging painful gas bubbles out of her back and limbs. But the morning chemotherapy started, Pete stood at the edge of her bed and announced that he had important business in Los Angeles. "He left before they'd even stuck the needle in my arm," Cassidy says.

Oprah.com: What it really takes to stay happily married

After that, Pete started leaving Cassidy's parents in charge of her care. Even worse was his emotional detachment. When Cassidy mentioned buying a new outfit for Easter -- steroids had inflated her size 6 frame to a size 14 -- Pete told her she already had a closet full of clothes. "That's when I realized he wasn't really there," says Cassidy.

Before long she began to suspect he was having an affair, but it took a post-chemo weekend trip with three girlfriends to convince her to end the marriage. By then -- three years after the diagnosis -- Pete had already seen his lawyer.

"Most people, when they think about 'in sickness and in health,' imagine themselves at age 70 or 80, with their spouse in bed with pneumonia," says Cassidy, who, at 42, is now cancer-free. "They're not picturing having a sick partner when they're young -- the months of treatment, the financial challenges. Cancer throws a lot at a couple."

Indeed, research suggests that Cassidy's experience isn't an anomaly, and that women are more likely than men to be victims of what's known as partner abandonment.

Oprah.com: The science behind a good marriage

Scientists point to a few possible explanations for the disparity. For one, being a caregiver is not a traditional role for men, says Dr. Marc Chamberlain, director of neuro-oncology at the Seattle Cancer Care Alliance and one of the authors of the Cancer study: "The majority of husbands take excellent care of their partners, but men on the whole tend to be less comfortable doing so."

Chamberlain adds that the demands of a spouse's illness can interfere with one's ability to earn a living, which may be harder for men to swallow -- or afford.

And these days, notes Jimmie Holland, M.D., a psycho-oncologist at Memorial Sloan-Kettering Cancer Center in New York, caregivers fill a larger role than ever: "In the past, a person would stay at the hospital for weeks. Now people come home with wounds that need to be cleaned, and all kinds of other things we once used to think only nurses could do."

This difficult job grows even tougher in the absence of emotional support. While women turn to friends, counselors, or groups for the help they need, men don't. A man typically relies on his spouse as his main confidant, and when that spouse is sick, he can find himself in a downward spiral of isolation.

"You can end up with an alienated individual," says Louise Knight, a social worker at Johns Hopkins Kimmel Cancer Center. "He doesn't have anyone to hang on to."

Ironically, a fear of abandonment may also play a role in a man's decision to leave, says Marisa Weiss, MD, a Philadelphia oncologist and founder of the nonprofit organization Breastcancer.org. Men tend to be less emotionally resilient than women, and a husband may withdraw from his ailing wife in a subconscious effort to minimize the pain he'd suffer should she not survive.

Oprah.com: How to win at love

According to the Cancer study, patients who divorced or separated after their diagnosis were more likely to be prescribed antidepressants and less likely to participate in potentially lifesaving clinical trials. In other words, weathering abandonment while struggling for your life can dramatically affect your fight. Marianne, who married her second husband just one year before her breast cancer diagnosis in 2005, found this to be heartbreakingly true.

"For the first six months, Gregory was so sweet and kind," says the former president of a nonprofit, now in her 50s. But by the time the couple had flown across the country to a first-rate cancer center for Marianne's mastectomy, things had changed: On New Year's Eve, just two days after her surgery, Gregory left her sore and drugged in the hotel while he went out to celebrate.

"The relationship fell apart after that," Marianne says. Once they got home, Gregory started staying out late and always had excuses for not driving his wife to chemo.

"It would have been easier if I were single," says Marianne, "because then I wouldn't have expected anything." With no relatives nearby, she went through treatment alone. Her doctors eventually recommended that she see a psychiatrist, who put her on an antidepressant. Marianne says her children kept her going in her darkest moments; without them, she would have been tempted to give up.

Oprah.com: Are you secretly sad?

The Cancer study concluded that longer unions tend to be more durable in the face of illness, meaning that new marriages -- like Cassidy's and Marianne's -- are particularly vulnerable.

"When I met Gregory I was very successful in my career, I was a prominent person in my community, I had a beautiful home," says Marianne. "When, a year later, I became a sick, disfigured, needy woman, Gregory was like, 'This is not what I signed up for.' He hadn't known me long enough to know I wouldn't always be that way."

There is a silver lining for couples facing the unthinkable. Partners who band together to fight an illness report increased closeness. Some women say disease forced them to lean on their spouses, which helped make their partners feel essential for the first time.

"I'm now more secure in our marriage," says Jennifer White, 47, of Fort Mill, South Carolina, an accountant who had to rely on her husband, David, during her breast cancer treatment. "I trust him more than ever before, because we've been through the worst together," she says. "And he's still here."

Oprah.com: Finding -- and keeping -- the love of your life