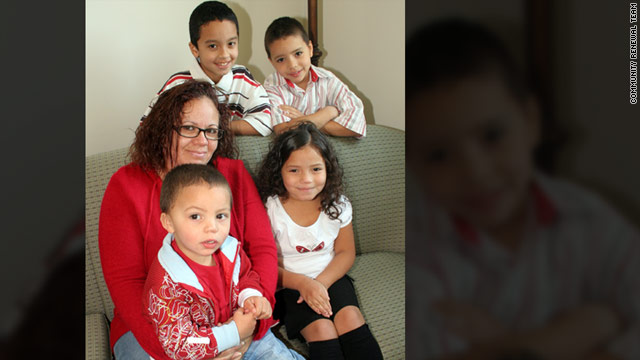 (CNN) -- Olga Santiago said raising four of her grandkids has led to an odd dynamic: Her daughter comes to visit her own children.

Santiago, a lifelong Hartford, Connecticut, resident, said she is in the process of adopting one of the four, a 12-year-old boy. The other three grandchildren she cares for belong to Santiago's other daughter, who Santiago says "had issues and we both decided I should just take them until she got her act together, which she did about a month ago."

When asked how she is getting by, Santiago said, "Love and patience."

The 48-year-old grandmother is not alone.

Recent statistics from the U.S. Census Bureau show that in the past two decades, the number of children living with a grandparent has risen 64%.

The figures, taken from the latest household relationship module of the Survey of Income and Program Participation, paint a picture that varies widely among races and cultures. White grandparents caring for their grandchildren account for the smallest numbers overall, but have shown the biggest increase.

The findings offer a snapshot of the changing landscape of American families, and they also show households beset by financial problems, said Jan Mutchler, who has studied the issue as a professor at the Gerontology Institute at the University of Massachusetts-Boston.

"A lot of it is economics," Mutchler said. "The grandparents often have the most stable and substantial income, because they have better economic resources than the parents do," she said.

Donna Butts, the executive director of Generations United, an umbrella group that offers social services to families, agreed, saying the rise in grandfamilies comes at a time of upheaval for the American family.

"We've seen an increase in the complexities that families are facing," Butts said. "They've faced a lot of obstacles and issues that have to be overcome. We also have seen an increase because of the economic realities of the past year, the housing crisis, layoffs, foreclosures," she said.

The new figures also confirmed that multigenerational households -- homes where grandparents and parents live together -- may be here to stay.

Seventy-six percent of children living with a grandparent in 2009 also lived with a parent, a statistically flat number compared to 1991.

"Intergenerational households have always been here," Mutchler said. "We've just started counting them. Whenever we would ask, 'Gee, when you were growing up did you ever live with a grandparent?' The answer would be, 'Yes,' but the census is just looking at them," she said.

Across all racial lines, mothers have borne the brunt of child-rearing responsibility, the numbers show. The percentage of white children living just with their mother went from 16% in 1991 to 19% in 2009, the census said.

One would think an extra income contributed by a grandparent joining the household would help single-parent or even double-parent families. Not necessarily, Mutchler said. Grandparents are younger today, but having a tougher time financially.

"There are a core number of people who are themselves older and some of them are really struggling in trying to provide for their grandchildren," she said. "But in looking at the numbers, only about a third of the grandparents responsible for grandchildren are over 60. The rest of them are into their 40s and so on," Mutchler said.

Santiago falls in that category.

About 12 years ago, the spry mother of two adult daughters was working as an assistant manager at a popular retail store, making out OK.

Then her adult daughters, both in their early 20s, started families.

Ten children now call Santiago "Grandma." As her daughters wilted under the economic strain, Santiago did what most parents would do and took in four of her grandchildren to keep them out of foster homes. But that meant she had to quit her job.

"I'd rather have them with me than with the system," she said.

Santiago said grandparents today take on the child-rearing role because many mothers are inept.

"A lot of young girls are having babies that can't even take care of themselves," she said. "And the mothers have to step in because the fathers are not stepping up."

It has been said that it takes a village to raise a child, but in practical terms, it has taken taxpayers, to some extent. Social programs have sprouted to fill a void in American child care.

Subsidized by HUD and other sources, programs such as the Generations Project in Hartford have made available to grandfamilies 24 rental units of affordable housing, said Jason Natelle, communications specialist for Community Renewal Team Inc., which runs the program.

Several senior housing developments, once known for being off limits to children, have opened specifically for grandfamilies in places like Kansas City and Chicago.

Any service aimed at grandparents is in essence an investment in today's youth, said Ted Houghton, executive director of the Supportive Housing Network of New York.

"A lot of the services (we provide) are focused on the youth," he said of social programs offered in New York. "With most young people you have this opportunity from 18 to 26 to help them get into gainful employment, otherwise you're going to have a difficult time. If you're 27 it's going to be hard. We operate in this window, in college and careers, so a lot of the services are focused on them."

Santiago, a beneficiary of Hartford's Generations Project, said she was late in finding out about the many resources available to grandparents."When I first got my grandkids I didn't know that there were a lot of programs out there," she said. "And they do help."