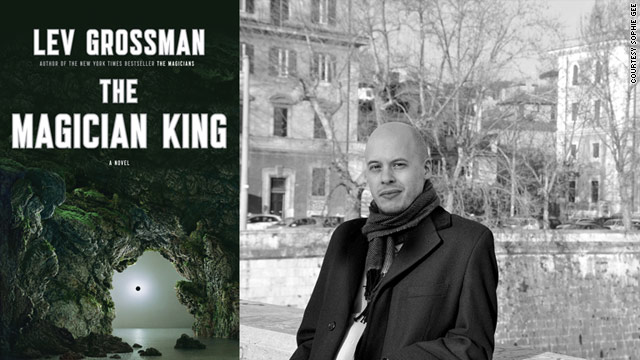 (CNN) -- If you're going through withdrawal after the end of the Harry Potter series, or if you outgrew "The Chronicles of Narnia" and have moved past the "Lord of the Rings," we have just the thing for you: Welcome back to the magical land of Fillory!

Best-selling author Lev Grossman first took readers to the fictional Fillory in "The Magicians" in 2009. The book was a best-seller, both a critical and commercial hit.

Now Grossman is back with an ambitious sequel, "The Magician King," arriving in bookstores this Tuesday.

If you're new to the series, "The Magicians" is the story of Quentin Coldwater, a teenage wannabe wizard from Chesterton, Massachusetts. Quentin learns all about magic at the Hogwarts-ish, Brakebills University and later discovers that Fillory, a Narnia-like world he grew up reading about, is in fact real.

Now in "The Magician King," Grossman extends his reach, sending Quentin and a supporting cast on an oceangoing hero's journey. There's a magical sailing ship, a fortune-telling dragon, even a talking sloth named Abigail.

If these adventures sound similar to the fantasy worlds of J.K. Rowling, C.S. Lewis and J.R.R. Tolkien, that's intentional. Grossman's novels pay homage to some favorite writers and books that he grew up with.

The big difference is that Grossman's magic takes place in a more cynical, profane and darker, modern world. These are fairy tales reimagined for grown-ups.

Think of it like Harry Potter meets "Less Than Zero." George R.R. Martin, best-selling author of "A Game of Thrones" and one of Grossman's many famous fans, says, " 'The Magicians' is to Harry Potter as a shot of Irish whiskey is to a glass of weak tea."

It seems books run in Grossman's blood. He's the son of two English professors; his twin brother is also a novelist. Grossman is also a well-known cultural commentator and the book critic for Time magazine. CNN recently spoke with him. The following is an edited transcript:

CNN: "The Magician King" seems like it would have been a fun book to write. Was it?

Grossman: A lot of fun. In some ways, it's based on "The Voyage of the Dawn Treader," by C.S. Lewis, which is one of those books that's just all joy, all the way through.

"The Magicians" was a coming-of-age novel; it had a lot of adolescent angst in it, but by the time we catch up to them in "The Magician King," the characters are past that. Now it's all about getting them in a magic boat and sending them out over the horizon to see what's there. Of course, they have plenty of disasters along the way. But I had fun. 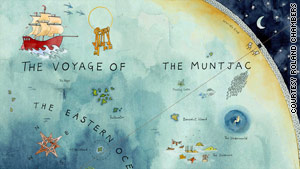 It's not Hogwarts or Narnia, but "The Magician King" also takes place in a fantasy land.

CNN: What was the spark that prompted you to write what many readers call a Harry Potter for grown-ups.

Grossman: There are always a few different sparks, but the one I'd point to is reading an early manuscript of my brother's book "Soon I Will Be Invincible." Austin and I are twins, and I understood immediately what he was doing. He was taking the mythologies that we'd loved as children and using them as raw material.

It was just so primal and so right. I didn't realize it was possible, but when I saw him do it, I knew I had to do something along those lines too. He worked with superhero stories. I drew more on the fantasy novels.

CNN: Your books are something of an homage to writers like J.K. Rowling and C.S. Lewis. I understand you've met Rowling. Do you know if she's read "The Magicians" or "The Magician King," and if so, what she thought?

Mystical P.I. in 'City of the Dead'

CNN: How do you think the fantasy genre has changed, since the Narnia books were published, even since Harry Potter?

Grossman: It's changed a lot. For one thing, Lewis and Tolkien were profoundly Christian writers. Their faith was a big part of their lives, and that comes through in what they wrote. I think fantasy has become more secular since then. Magic comes in a lot more flavors now, not just the divine.

Just look at Harry Potter: There's no Aslan, no praying. It's all wand-waving: swish and flick. It's very different from what Lewis was doing. But even since Harry Potter, a lot has changed. So many more people are reading and writing fantasy than before, and I think as a result of that, fantasy has exploded in all kinds of different directions. It's evolving at a furious rate. Writers like Neil Gaiman, Susanna Clarke, China Mieville, George R.R. Martin, Kelly Link -- they're doing things with fantasy Lewis and Tolkien would never have believed were possible.

CNN: You're also the book critic at Time magazine, so what have you read recently that you really enjoyed?

Grossman: Well, just in terms of fantasy, I would mention in particular Joe Abercrombie's "The Heroes" and George R.R. Martin's "A Dance with Dragons." As for more literary novels, I haven't really fallen in love with one this year, but I just finished a nonfiction book called "Everybody Loves Our Town," which is an oral history of the Seattle music scene, and it's utterly brilliant. I finally understand the 1990s now.

CNN: Your parents are both English professors; your twin brother also is a novelist. Seems like writing and creativity must be in your genes.

Grossman: You know, it sounds funny to say it, but sometimes I'm amazed both my brother and I ended up as writers. There were certainly a lot of books around when we were growing up, but in a lot of ways, becoming a writer was harder with two powerful literary personalities in the house already. It was hard to find my own voice in all that. My sister opted out completely and became a mathematical sculptor. She made a separate peace.

CNN: Can we expect to see the further adventures of Quentin Coldwater and a return to Fillory sometime soon?

Grossman: I have one more book's worth of ideas for Quentin. Three books feels like enough. I already have something else at the back of my mind that needs to get written, and it won't wait much longer than that.

You can read more about Grossman on his website.