Unwanted parenting advice -- how to defend yourself 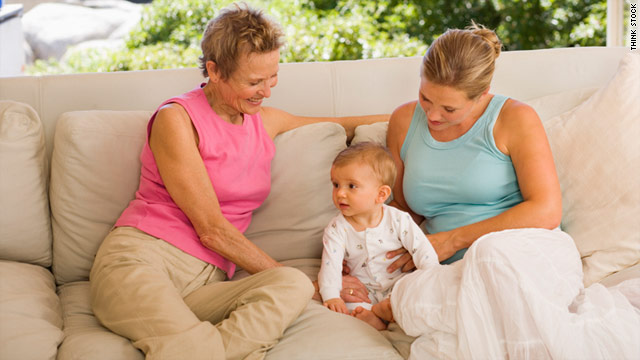 It shouldn't matter what family and friends think of your parenting strategy.
STORY HIGHLIGHTS
RELATED TOPICS

(Parenting.com) -- As a baby, my daughter Anna refused to wear her shoes or socks. Not a big deal if we lived on a sunny beach. But we live in Montana -- and she was born in late October. So the first line of the mother-daughter battlefield was drawn: I put her shoes and socks on, she worked them off. If she was lucky, she'd push them off when we were in transit and they'd be lost forever. Score: Anna 1, Mom 0.

Then one day, while we were on vacation, a stranger wandered into the crossfire. She was older, better rested, better dressed, and apparently a self-proclaimed authority on baby podiatry. She took one look at Anna in the hotel lobby and screeched, "Ooooh! Look at the tiny little baby with the cold feet!"

"They aren't cold," I said, instantly defensive. "Feel them!" I thrust my daughter's feet, dangling from my chest as she hung in her front carrier, toward the woman's hands. Her parting shot as she cradled Anna's darling little tootsies: "They're like ice!" I turned and left, holding my daughter's (warm, I tell you!) feet and feeling pretty ridiculous.

Almost every mom has a similar story about when someone's criticism made her fume. The trigger can be anything from an idle remark -- for instance, your mother-in-law wondering aloud why you have to nurse so often -- to comments that seem specifically designed to hurt (the mom who declares within earshot that she'd never let her child have formula, right as you give your baby a bottle).

In fact, people don't have to use words at all -- a disapproving stare from your sister as you turn on the TV for your toddler can speak volumes.

Parenting.com: 9 things you should never say to your kids

Of course, in the immortal words of my own mother, what does it matter what other people think? Well, it shouldn't, but too often it does. Here's how to manage meddlers, well-meaning or not:

From the moment you're visibly pregnant till (I can only imagine) the time your child becomes a teenager, people you've never laid eyes on before will feel compelled to question your parenting skills. Their input should be the easiest to dismiss -- you don't know these people, right? On the other hand, they don't know you! So how can they presume to say these things?

This is precisely why Brynn Dessent can never forget the woman who stood behind her at the bank one day.

"I was holding my five-month-old and talking about how I had to go back to work and how hard it was," remembers Dessent, a Los Angeles-based postproduction film supervisor. "This lady said I was making a big mistake -- that her own son had never forgiven her for working." The worst part? "She didn't know my financial reasons for working, or my emotional struggle with it all," says Dessent.

Jennifer Salerno, a mom of four, has learned to give strangers who are a little too free with their advice a low-key lesson in the fact that she's someone who knows what she's doing, thank you. "I just say, 'Oh, yes, that worked with my other three at home' or 'Yes, but this is nothing compared to what his older siblings did,' " she says. "That just shuts people down."

Even if you have just one child, humor can work wonders, says Leah Hennen, of Oakland. Initially, whenever her daughter, Laurel, had a tantrum in public, strangers' reactions made her want to scream, too. "People asked, 'Aww...is she having a bad day?' "

Eventually, says Hennen, "my husband and I would say, 'Not really -- you should've seen her on Sunday.' " This gave people the gentle message to let her handle it.

Getting unwelcome input from people you don't know is annoying. Yet it's somehow even worse to hear it from people who know you well, since their remarks can pack an extra punch.

Lisa of Birmingham, Alabama, learned this the hard way after she asked her in-laws not to let their dogs lick her infant daughter's face. They acted as if the request was "ridiculous," Fry says, adding, "Now, when I visit, they say things to the dogs like 'Don't give kisses to the baby now, Lisa's here.' " And they continue to insist that dogs have sanitary mouths.

Right now, she just ignores their comments. But she admits, "I'm trying to figure out a way in which I can tell them that there are certain things that I believe, and that while they can believe differently, they need to respect what I think and want."

Figuring out what you can ignore and what's nonnegotiable is key. Fortunately for Shannon Rebolledo, the Wichita, Kansas, mom of 3-year-old Raef, her in-laws offer advice only from afar, since they're in South America.

"They wanted me not to breastfeed my son for the first week of his life because I'd had gestational diabetes. They said I'd give it to him, something I knew was medically incorrect," she says. Her response? "I just said, 'Okay.' " Then she went ahead and nursed her baby.

Parenting.com: How to make peace with your in-laws

Since they're so often the victims of unwanted advice themselves, you'd expect other moms to think carefully before they speak. But sometimes they can be the worst offenders -- maybe because they have so many of their own experiences to base their opinions on.

When my friend Alice had her daughter five years ago, strangers would occasionally comment on how the tip of infant's tongue often protruded from her mouth. "I didn't think it was a big deal," says Smith, but because other people kept mentioning it, she shared her concerns with her friend.

Rather than reassuring her that Jenny was fine, the friend "went on and on about how her sister had the same problem as a child and had speech problems and eating issues, and ended up needing reconstructive surgery on her mouth!"

Jenny's tongue eventually retreated into her mouth without any intervention at all. It took years for Alice to come to understand why the friend (who has given her less than supportive advice on a few other occasions) had upset her so much.

"I finally realized that she has the best intentions and is only trying to share information that she has found useful," she says. "She just doesn't stop to think that what happened in one case, or what worked for one person, doesn't necessarily apply to me."

Kate Cook, a Palo Alto, California, mother of three, had a similar problem with her friend whose older son suffered from several health problems. "She would just give me so much advice based on what happened to her and her son that it would send me into a tailspin," Cook says. "I've come to see that this is just her deal -- not mine. My kids aren't the same as hers."

Another strategy: Depending on the relationship you have with your friend, be honest.

Tell her you're sharing your worries because you want a sympathetic ear, not necessarily advice, and certainly not criticism. Chances are she'll respect your wishes.

Caregivers who care too much

There's a fine line between being super helpful and super annoying, and even the best sitter or daycare provide may not be aware when she's crossing it and butting in.

Parenting contributing editor Denene Millner, an Atlanta mom of two and stepmom of one, remembers the time her nanny was concerned about her daughters' colds and wanted Millner to rub a mentholatum ointment on their chests before bed. "When I didn't, she acted like I was trying to make them suffer," she says.

Millner didn't want to fire her nanny for caring too much, or lose her in anger. So she did what any good manager would: She delegated, asking her husband to talk to their nanny about it instead.

"It preserves the equality in my relationship with our nanny by letting my husband be the boss and deal with the misunderstandings that arise," she says. "It also keeps the relationship between her and me healthy while still letting me blow off steam through a third party."

Of course, if you don't have a person ready to play the bad-cop role in your household, you'll have to address your concerns with your caregiver directly, which can feel uncomfortable to consider but empowering to actually do.

I've done it myself, and it was in just these situations that I found my voice, and perhaps even my identity, as a mom. This is, in fact, the good-news part of handling unwanted parenting advice. Deal with it and you may just see your confidence grow.

Barbara Rowley, a mother of two, is currently working on "Surrender Alice", a novel about modern motherhood.