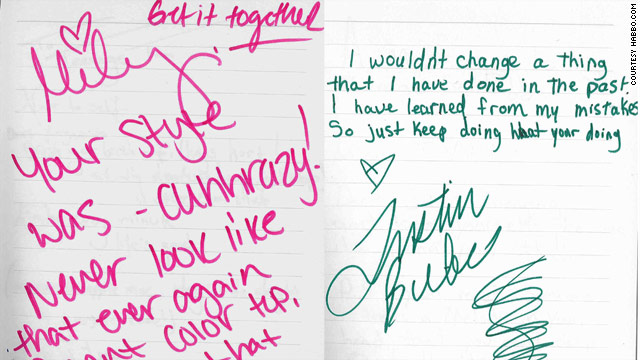 (CNN) -- A glance at teen stars Miley Cyrus and Justin Bieber's letters to their younger selves makes one thing clear: their handwriting is terrible. In the letters, part of the Habbo Celebrity "Advice to My Teenage Self" book, the content is messy and their cursive signatures are barely legible.

The handwriting of today's teen stars "is so atrocious, it's talked about and recognized through the industry," says Justin King, a Toronto-based paparazzi for Flynet Pictures and independent autograph seller. "With stars ages 30 and above, they generally have a much more full, legible signature. When you deal with these new people like [teen actress] Elle Fanning, you're lucky if you get an E and F and a heart for her signature."

It's just not the teen stars who can't write properly. Most states don't require children to learn cursive writing anymore. Some 46 states have adopted the Common Core Standards, a set of educational guidelines that do not require cursive writing as part of a school's curriculum. The state of Indiana recently announced it would drop a district requirement to teach cursive writing as of this fall. Instead, students must be able to type on keyboards.

Technology has pushed cursive writing off the agenda of many school systems across the country. As a result, Handwriting Without Tears founder Jan Olsen sees more sloppy handwriting in schools today.

"If you stop teaching handwriting in the second grade, you're going to have a generation of people who write like second graders," says Olsen, whose company teaches a clean and simple style of cursive that avoids the fancy curls and swirls of old-fashioned script.

Are we becoming a country of adults who write like children? Will we be able to understand the power of John Hancock's actual signature on the Declaration of Independence if we can't read the document he signed? How can we feel the magic of Jane Austen's earliest, unpublished, handwritten manuscript, "The Watsons," which recently sold for $1.6 million at auction?

"Handwritten documents convey important cultural information about authors," says Davis Schneiderman, novelist and chair of the English Department at Lake Forest College. "These documents also suggest an authenticity that electronically produced documents do not. The Declaration is an index of its time as well as clue to the physicality of its signers. Imagine 'John Hancock' typed in an 18-point Times New Roman font. The proud fury behind his oversized signature would be lost."

Retired schoolteacher Carol Collin also mourns the loss of cursive in children's lives. "They miss the sense of pride they get when they can write neatly and elegantly in cursive instead of only knowing manuscript [print]," says Collin, who taught for 40 years in the Monterey Peninsula Unified School District in California and still substitute teaches. "There are many times in school and as an adult where being able to write elegantly is an advantage. Prospective employers will be impressed by clear, readable, attractive writing."

Educators warn of negative effects of not teaching cursive

Granted, most workplaces are more likely to be dominated by computers and technology than pens and pencils and handwritten thank you notes. Its makes sense that computers are the go-to resource for researching and writing papers and other homework assignments.

Handwriting has never been a static art

Yet teens who can't write legibly -- multimillionaire teen celebrities aside -- do suffer. Even though many children use computers to write papers at home, most writing done within the school walls is still done by hand. (The country's ongoing economic problems won't likely add many computers to our nation's public school classrooms in the next few years.)

"Without it [cursive handwriting] you lose the sense of having your thought process through your hand movements to create your language and thoughts to someone else," says Michael Sull, a master penman in Spencerian script; past president of the International Association of Master Penmen, Engrossers and Teachers of Handwriting; and author of four books on handwriting including, "American Cursive Handwriting," which was released last month. "There is a great loss in the progress that could be made with children fostering their motor skill development, literacy training and concepts of communication."

Sloppiness makes the reader think the writer's ideas aren't any good, studies show. "If you have sloppy handwriting, people make [negative] judgments about the quality of your ideas," says Steven Graham, professor of education at Vanderbilt University.

And poor handwriting slows down the writer. If you write slowly, your hand may not be able to keep up with your mind's attempt to have a thought, form it into a sentence and remember it long enough to write it down. "Until you can do this skill quickly and without thinking, it will interfere with your output," says Graham. "You better learn to write."