By Ashley Strickland, Special to CNN 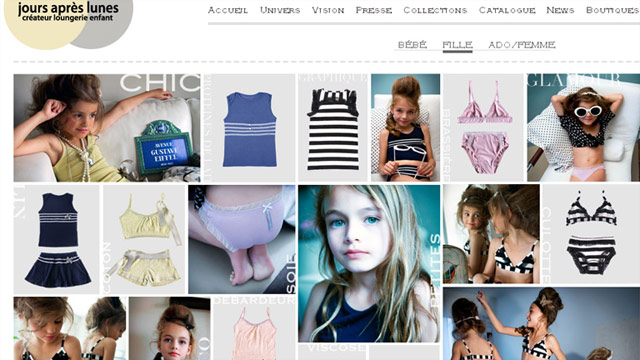 The company's mission is to be "the first designer brand dedicated to 'loungerie' for children and teenagers."
STORY HIGHLIGHTS

(CNN) -- They recline in their bras and panties, some wearing pearls and Brigitte Bardot-inspired bouffants, shooting smiles at the camera. The images are just like many a lingerie ad designed to entice, but these are images of young girls -- those who aren't even old enough to need bras.

French company Jours Après Lunes has designed a line of "loungerie" -- a compromise between loungewear and lingerie -- for children between the ages of 4 and 12. A line for teenagers and infants is seemingly age appropriate, but the designs for children are drawing fire.

The company's mission is to be "the first designer brand dedicated to 'loungerie' for children and teenagers, comprised of loungewear and lingerie to be worn over and under, inside and outside."

Fashionista.com first broke the story, stating "What's disturbing about Jours Après Lunes is not just the fact that it's lingerie for people who probably shouldn't be old enough to even know what lingerie is, but the photographs on their website."

In the comments, readers went back and forth over the appropriateness of the lingerie, asking if these girls were old enough to make decisions about how they want to look and, even more hotly contested, if the styling of the photos sexualizes the lingerie, rather than the designs themselves.

In an interview with The Lingerie Journal, Jours Après Lunes creator Sophie Morin defended her brand and the photographs included in the ad campaign.

"There is no vulgar connotation," she told the lingerie industry publication. "The materials are totally opaque, there is no transparency, no lace. The triangles -- there are only two in the collection -- are used in swimwear for the smallest children and as a first support for young girls, even by young women who are not looking for proper support since the tops I design do not offer any. There is no bra in my collection.

"The children are not wearing heels, nor nail polish, nor lipstick," Morin added. "Their hairstyles are exaggerated, just as are games and the child's universe. These models are professional models and not 'Lolitas' who have stolen women's clothing."

Comments on the Fashionista story show that many who have viewed the ads don't take away the innocent "child's universe" that Morin was hoping to convey.

The makeup on the models, although it may not include lipstick, was another upsetting factor for viewers, and while Morin says there are no bras in the collection, it was assumed that the "swimwear tops" were lingerie-esque in appearance.

Morin also said that the loungerie is not distributed in the U.S. or the UK.

The criticism of the French clothing line is not unlike when Abercrombie and Fitch released its "Ashley" push-up bra, originally designed for 7-year-olds but later marketed to 12-year-old girls after a public outcry.

Previously on CNN.com/opinion: Parents, don't dress your girls like tramps

In 2007, the American Psychological Association developed a task force of psychologists to tackle the issue of sexualization of girls in every form of media. Dr. Tomi-Ann Roberts was a part of that task force and continues to address female body image and sexuality.

Dr. Roberts and her colleagues on the task force say that sexually objectifying women at a progressively younger age has been occurring for the last 20 years in advertising. The photo spread by Jours Après Lunes came as no surprise to her, although she still considers these ad campaigns to be "nauseating and sick."

In a society that continues to value younger women, we've reached an ultimate low, Roberts said. This campaign, with its prominently featured stuffed animals, is eerily similar to a recent Victoria's Secret fashion show, where scantily-clad models "dragged teddy bears down the catwalk," she said.

And as for the girls involved in the photo shoot, Roberts believes they know how to portray a sexualized look.

"I think the advertising world is trying to convince all of us that youth is the only good time of life," Dr. Roberts said. "Now it's like, we've been obsessed with youth, so we might as well have them be 6 years old. Today's girls equate pretty with 'trumped-up sexy.'

"We have now said, as a society, that attractiveness today is constituted by a pornographied, voyeuristic look-at-me kind of sexuality. Girls know it very well. If I say 'Look pretty' to a young girl, she lowers her chin, slants her eyes and turns to the side. That's everywhere around them.

"What we have taught them by posing them this way that there's something about their bodies that is publicly consumable."

Discussion: Would you buy this kind of lingerie for your young daughter? Tell us in the comments section below.