By David Eltis and David Richardson, Special to CNN

Editor's note: David Eltis and David Richardson are co-authors of the "Atlas of the Transatlantic Slave Trade." Eltis is Robert W. Woodruff professor of history at Emory University and co-editor of the Transatlantic Slave Trade database. Richardson is the director of the Wilberforce Institute for the Study of Slavery and Emancipation at the University of Hull, England.

(CNN) -- Most students of American history understand that a dramatic re-peopling of North and South America began in the years after Christopher Columbus first landed in the New World. But they may not realize that it was Africa, not Europe, that formed the wellspring of this repopulation process.

In the 3¼ centuries between 1492 and about 1820, four enslaved Africans left the Old World for every European. During those years, Africans comprised the largest forced oceanic migration in the history of the world. Who were they? Who organized the slaving voyages? Which parts of Africa did they come from? How did they reach the Americas? And where exactly did they go?

Strikingly, we can now provide better answers to such questions for Africans than we can for European migrants. The African slave trade reduced people to commodities, but commodities generated profits, and where there were profits there was generally good record-keeping.

Since the onset of the computer revolution in the early 1960s, early modern business and government records have allowed historians to retrieve information on 35,000 slave voyages from Africa to the Americas and make the information available on the internet. For many of these voyages, we have rich detail on the slave ship itineraries, as well as who was put on board, who survived and how they traveled.

"...in the West Indies, their hard-hearted overseers have neither regard to the laws of God, nor the life of their fellow men."
--Captive Ottobah Cuguano, writing in 1787, quoted by David Eltis and David Richardson

A new "Atlas of the Transatlantic Slave Trade" draws on five decades of research in archives around the north and south Atlantic to provide 189 detailed and sumptuously drawn maps that answer many questions.

These maps show that almost every port in the early modern Atlantic world organized and sent out a slave voyage, and that the bigger the port, the greater the number it sent out.

Such ubiquity suggests that before the abolitionist era, there was no moral outrage or public disgrace associated with trading in African slaves. The maps also show that almost half of all voyages were organized and set out from the Americas, not Europe. As a result, bilateral (that is out and return) itineraries were almost as common as the famous "triangular voyage" pattern based on voyages dispatched from Europe. 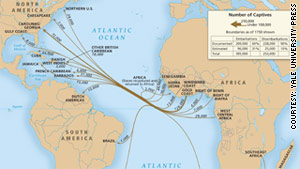 The new "Atlas" of the slave trade provides 189 maps tracing the voyages.

Within the United States, we now know that slave voyages left from almost every port and that although Rhode Island might be well-known as a slave trading region, it was far from synonymous with the U.S. slave trade. New York and Charleston, South Carolina, were also major centers.

A profile of those on board ship as well as the conditions to which they were subjected also emerges from the pages of the Atlas. Thus, Samuel Adjai Crowther, liberated from a slave ship as a child in 1821, became the first Anglican African bishop and was largely responsible for creating the first written version of the Yoruba language. Remarkably, he married Asano, whom he had first met as a girl on the slave ship from which they were both rescued.

The Atlas also contains the story of Mahommah G. Baquaqua, who was enslaved probably in what is now western Nigeria in 1845 as a 20-year old. He was first taken to Recife in Brazil, and after a ship's captain purchased him in Rio de Janeiro, he was taken to New York where he escaped, fled to Haiti, and after returning to New York to study and then moving to Canada, he wrote his autobiography.

For most there was no escape. As another captive, Ottobah Cuguano, wrote in 1787 in his own narrative, "the misery of that of any of the inhabitants of Africa meet with among themselves is far inferior to those of the inhospitable regions of misery which they meet with in the West Indies, where their hard-hearted overseers have neither regard to the laws of God, nor the life of their fellow men."

Some of the survivors lived on into the age of photography. Photographs of Crowther as well Cudjoe and Abache Lewis, who arrived on the last slave vessel to come into the US (the Clotilde in 1860) are displayed among the maps along with stories and paintings of some of their 18th century predecessors, such as Venture Smith and Phillis Wheatley.

The Atlas also charts more general patterns among captives such as their age and sex and, for two regions, evidence of ethno linguistic origins. The maps show that both mortality and voyage length in days declined over the slave trade era, but, as with ports in Europe from which free migrants left, risk of death was persistently greater from some regions of departure than from others. Captives leaving from what is now eastern Nigeria were particularly at risk with, on average, almost one fifth of those embarked dying on the Middle Passage.

Almost half of all voyages were organized and set out from the Americas, not Europe.
--David Eltis and David Richardson
RELATED TOPICS

But the major contribution of the Atlas is to make it clear that the slave trade was not a random process. Systematic connections between Africa and the Americas can be tracked in the same way that people have been doing for years between Europe and the Americas.

Particular ports and regions in Africa were linked via winds, currents and political circumstances with particular islands, regions and ports in the Americas. For example, Angola supplied four out of every five captives in the very large branch of the trade that went to the southern cone region of South America (Brazil, Argentina, Uruguay). The United States drew a larger proportion of its slaves from Senegambia south to Liberia than any other region in the Americas. And Amazonia drew almost all of its captives from what is now Guinea-Conakry.

Where a given part of the Americas drew on a number of African regions, it tended to do so in sequence. Thus Jamaica drew heavily on what is now Ghana and Benin in the 17th century before switching to first eastern Nigeria and then northern Angola and the Congo region. Such transatlantic links bear an uncanny resemblance to the patterns established by free migrants leaving Europe for the Americas.

Finally, the Atlas shows that the Atlantic slave trade remained strong until it was suppressed. Like the institution of slavery, the traffic that supplied captives did not die a natural economic death. The maps establish that in all the major importing areas of the Americas, the volume of the traffic peaked in the years just before its suppression. This pattern held for Brazil, the United States, and the British Americas as a whole.

It is becoming commonplace to claim that there are more slaves in the world today than ever and that large-scale trafficking in people continues. The "Atlas of the Transatlantic Slave Trade" suggests that such claims tend to obscure the horrors -- unique in human history -- of the Middle Passage from Africa to the Americas. It is indeed hard to imagine circumstances in which any parallel to the transatlantic slave trade could ever happen again.