The battle for Egypt's past

By Paul Sussman, Special to CNN 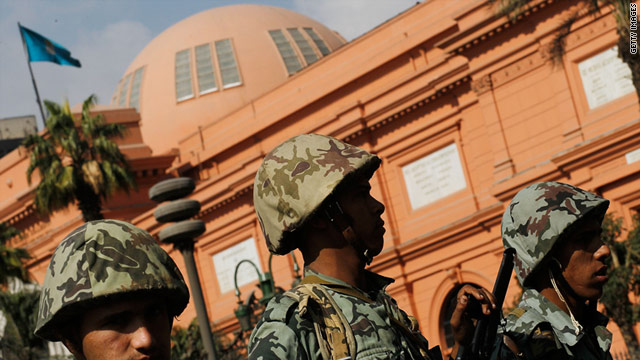 Soldiers stand guard outside of the Egyptian Museum in Tahrir Square on the morning of January 31 in central Cairo.
STORY HIGHLIGHTS

Author Paul Sussman worked as a field archaeologist in Egypt for many years. His new novel, "The Hidden Oasis," is published by Bantam Press.

(CNN) -- It sounds petty to say it given that over a hundred people have now lost their lives, but amid the seismic events currently engulfing Egypt, the thing that has most saddened and upset me has been the damage done to the country's uniquely rich cultural heritage.

I worked in Egypt for many years as a field archaeologist, and the news of widespread looting and destruction has been utterly heartbreaking.

So far, fortunately, the damage has not been anything like as severe or extensive as that witnessed in Iraq following the fall of Saddam Hussein in 2003.

That damage has, and continues to be done, however, is beyond question. On the night of Friday, January 28, looters broke into the Museum of Egyptian Antiquities in Cairo and vandalized some of its most precious artefacts (including objects from the Tutankhamun collection). Elsewhere -- at Saqqara, Abu Sir, Qantara to name but a few -- ancient monuments have been damaged, museums broken into and archaeological storage magazines ransacked.

Nor is it simply ancient remains that have been targeted. In Cairo, the city's Coptic Museum and the early 20th century El-Manial Palace have both suffered looting.

As Zahi Hawass, head of the country's Supreme Council of Antiquities, says on his website: "My heart is broken and my blood is boiling."

On one level, of course, the loss of a few objects, when set against so many deaths and injuries, is wholly irrelevant.

Even before the current upheavals, the preservation of historical remains featured low on the list of priorities of a majority of Egyptians, for whom simply getting food on the table is a daily struggle.

On another level, however, the damage to its cultural remains strikes at the very heart of the Egyptian identity.

In Egypt, history matters. This is a country that for 3,000 years under the pharaohs was one of the world's predominant superpowers. It played a crucial role in the development of early Christianity (it was the birthplace of the monastic tradition) and was the political center of the Muslim world under the Fatimid and, later, the Mamluk dynasties. In modern times, under Gamal Abdel Nasser, it was at the forefront of the Arab Nationalist movement.

For every Egyptian I have ever met, this history is a source of immense pride. It is hard-wired into their cultural conscious, is intricately bound up with their sense of self. Not simply because history brings tourists and tourists bring money (11 percent of Egyptian GDP comes from tourism), but because in a country where poverty, lack of opportunity and repression are the norm, the glories of the past offer a form of empowerment in the present.

There is a telling, and wonderful story of Tutankhamun's body being returned to his tomb in Luxor after a period being studied in Cairo. As the boat carrying the body moved along the Nile, fellaheen women lined the river's banks ululating in honor of the dead king. For them, this was not some distant, meaningless figure, but rather one of their own.

Egyptians feel a personal connection with their past. It shouldn't be over-sentimentalized, and during my years working there I encountered numerous instances of friction -- often violent friction - between the Antiquities authorities and the interests of local people. Appreciation of one's national heritage tends to diminish when your house is being knocked down because it happens to be built over some Old Kingdom remains.

That said, a vast majority of Egyptians have been deeply shocked by the current looting and destruction. It is as if their own property has been attacked. Across the country, in the absence of police protection, they have mobilized to defend their monuments. In Cairo, hundreds of people linked arms around the museum to protect it; on the West Bank of the Nile in Luxor citizen's groups have banded together to guard the tombs and temples.

What they are defending is not so much a few dusty old objects as the very idea of what it is to be Egyptian.

The opinions expressed in this commentary are solely those of Paul Sussman.