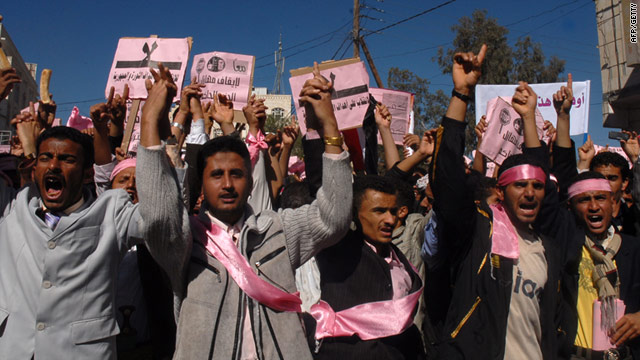 Yemenis have already taken to the streets of Sanaa to call on President Ali Abdullah Saleh -- in post since 1978 -- to quit.
STORY HIGHLIGHTS

(CNN) -- Thousands of Egyptians have taken to the streets of cities across the country for a seventh straight day of demonstrations aimed at forcing long-time president Hosni Mubarak to quit.

Widespread unrest broke out in Egypt in the wake of Tunisia's Jasmine Revolution, but could the upheaval go further? Are we about to witness the Arab world's equivalent of 1989, when a tide of popular protests swept away many of Eastern Europe's communist regimes?

CNN asked experts on the region for their thoughts on what will happen next in the Middle East and North Africa.

We are already seeing the reverberations of the call for political reform which started in Tunisia -- in Egypt, but also in Yemen, in Jordan.

It's not going to stop here. It is difficult to counter the urge for political reform once it has begun.

For decades, authoritarian regimes have remained in power, and now we have a whole new generation who have grown up under them, and they want to see a different political system, one that is accountable, that will do something about the corruption.

This doesn't mean it will happen in other places on the scale of Egypt or Tunisia, but we can see the beginnings of people going out onto the streets and asking for reform, for change.

This could be our 1989, the moment we will see the collapse of a series of authoritarian regimes, one after another.

The potential is there, the desire is there on a popular level, but there are still issues to overcome -- the strength of the military for example, as we are seeing in Egypt.

It is not going to happen overnight, there are many obstacles, but we are on the path to it now -- it is not a matter of if, but when. We are set on the course.

What is happening in Egypt was clearly inspired by the experience in Tunisia, and it could spread further.

Tunisia showed us two things: how weak the government really is, and how regaining the street can help make a difference in the political sphere -- once you break your fears and stay out in the street, in the long run, you can force change.

Each country is different -- Egypt is different to Tunisia, but some of the ingredients are similar: the explosive mix of unemployment, a young population, long-ruling autocracies, rising food prices, and a lack of civil liberties.

I'm not sure where it could spread to next, but some other countries -- Morocco, Libya, Jordan, Yemen -- are potential candidates, where you have citizens beginning to demand change.

It has to be down to the citizens, it is non-ideological, it is simply about the people demanding basic rights, and Tunisia was the inspiration, the empowerment for that.

Tens of thousands of young activists and opposition members in Yemen have called for President Ali Abdullah Saleh, who has been in power for almost 32 years, to step down.

In contrast to Tunisia and Egypt, the protests in Yemen have been largely peaceful, but many of the grievances are alike -- high unemployment, rising food prices, poverty and dissatisfaction with a regime perceived to be illegitimate.

Although they lack the revolutionary fervor of Cairo and Tunis, Yemen's protests have empowered the formal opposition and strengthened their negotiating position.

Yemen's coalition of opposition members has declared February 3 a "Day of Anger," and will be looking to capitalize on any signs of weakness within the regime.

Eyes will be on Saleh to see if he cuts any power-sharing deals and whether the promised elections will go ahead in April.

For all the euphoria about people power facing down dictatorial regimes, Egypt and Tunisia face even tougher challenges now -- because their populations had raised expectations and believe they now deserve changes that will bring tangible improvements in their lives.

Any regime -- old or new -- will find it almost impossible to deliver benefits soon enough.

Egypt, Tunisia and the bubbling unrest elsewhere in the Arab world emerged because of a confluence of factors: Literacy and education were the critical first components, moving people beyond goals of daily subsistence. Demographics created a dominant young population that is aware of changes elsewhere in the world over the past 30 years.

The combination of literacy and demographics alone were combustible. But then the rise of satellite channels since the mid-1990s provided a source of information outside the state's control. And technology offered a means of communicating and mobilizing.

But the upheavals are also part and parcel of a broader historical pattern that includes the demise of communism in Eastern Europe, the end of minority rule and apartheid in Africa, and the collapse of military dictatorships in Latin America.

It is partly political, to end dictatorial rule, but economics created the spark in virtually all of these societies. And economics has been the overriding issue in Egypt and Tunisia too -- people turned out on the streets not just to change their leadership, but to better their own lives.