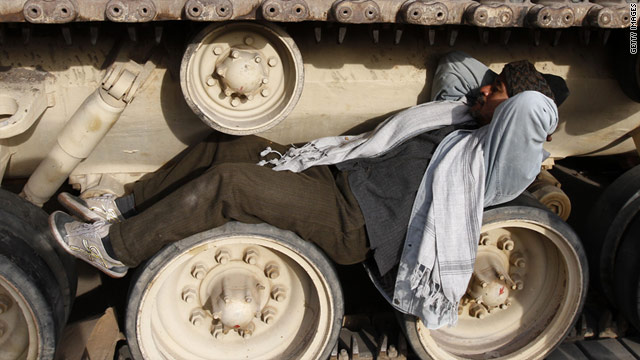 The Egyptian military's refusal to move against protesters, one of whom naps on the side of a tank, was a blow to the regime.
STORY HIGHLIGHTS

Editor's note: Robert E. Hunter is a senior adviser at the RAND Corp., a former U.S. ambassador to NATO and former director of Middle East Affairs at the National Security Council, 1979-1981. RAND is a nonprofit institution that helps improve policy and decision-making through research and analysis.

Continuing support for the Egyptian military will be crucial for U.S. influence and for an evolution in Egypt that can meet American interests. Cutting off this aid or threatening to do so could be a body blow to U.S. policy.

President Hosni Mubarak will have to depart long before September's scheduled presidential elections. This outcome became inevitable when Egypt's military leadership declared the army would not use force against the demonstrators.

At that, any remaining legitimacy of the Mubarak government suddenly crumbled. The military is the most broadly respected institution in the country.

This mirrored what happened in Central Europe at the end of the Cold War, when soldiers refused to fire on people like themselves. With the forbearance shown by the Egyptian military, any remaining legitimacy of the Mubarak government suddenly crumbled. Not coincidentally, the military is the most broadly respected institution in the country.

One reason Egypt's military responded to the demonstrations so positively has been its long-standing ties to the U.S. military, stretching back three decades.

The military is the most broadly respected institution in the country.
--Robert E. Hunter

Fortuitously, the Egyptian chief of staff was in the Pentagon with two dozen high-ranking officers for annual staff talks as the protests began to mount. His American hosts had an opportunity to discuss the importance of the Egyptian military's practicing the equivalent of remaining "in barracks" and exercising restraint. It also offered the potential for continued close relations to the U.S. military.

American military support for Egypt has been substantial, with about $1.3 billion in military aid a year, a figure eclipsed only by U.S. assistance to Israel for a similar reason: the critical importance to regional stability and U.S. interests that the 1979 Egypt-Israel peace treaty remain firm and inviolate.

The U.S. and Egyptian militaries have forged close relations. Egyptian officers go to U.S. military schools, its air force flies the U.S. F-16, and the U.S. main battle tank, the M1A1, is built in Egypt for its use. All this may look like a huge bill in terms of the flow of military aid, but it is a small cost compared with the risks of a new Egyptian-Israeli conflict or an Egyptian drift from the U.S. sphere of influence in the region.

Egyptian memory also helped. Before President Anwar Sadat expelled Soviet "advisers" in the late 1970s, precisely to shift allegiances to the West, U.S. interests benefited from the abusive, racist way that Russians treated Egyptian officers in Moscow military schools and in Cairo. Egyptian experience with the U.S. military has been the opposite. Indeed, the U.S. has shown it fully respects Egyptian sovereignty, a precious asset for its people.

In 1979, after the Iranian revolution and Soviet invasion of Afghanistan, the U.S. Air Force conducted emergency joint exercises with the Egyptian air force. I was the senior official for the Middle East on the National Security Council at the time. When the exercises were completed, the U.S. Air Force proposed to keep its equipment in Egypt before regularly scheduled exercises a few weeks later.

The White House persuaded the U.S. Air Force to remove its equipment, which was returned later. Soon thereafter, Sadat met with President Jimmy Carter in the White House. Sadat said, "The fact that your forces left spoke more loudly than the fact that they came. You can come again, anytime."

Leverage starts with respect and continues by focusing on the possibilities for the future. Rather than threatening a reduction or cessation of military aid, the U.S. will be far wiser to make clear that it wants to reinforce positive relations with the Egyptian military for mutual benefit.

The message will be clearly received. Fortunately, President Barack Obama has proved to be statesmanlike in his words and deeds, along with the U.S. military's leadership, the other solid pillar of American policy in this crisis. Chairman of the Joint Chiefs of Staff Adm. Mike Mullen said recently he would "caution against doing anything (on aid for Egypt) until we know what's really going on." That is the correct approach.

The opinions expressed in this commentary are solely those of Robert E. Hunter.