Egypt shows 'clash of civilizations' was a myth

By Arun Kundnani, Special to CNN 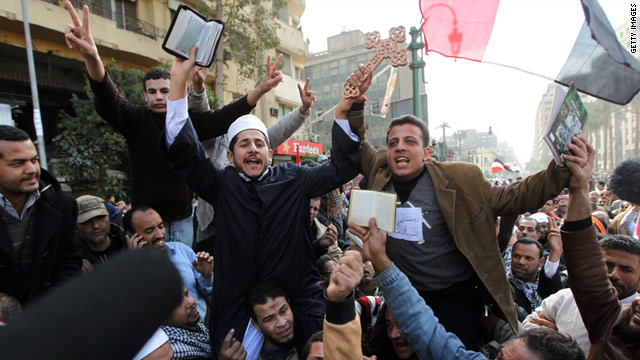 Coptic Christians and Muslims raise a Cross and a Koran at Cairo's Tahrir Square on February 6.
STORY HIGHLIGHTS

Editor's note: Arun Kundnani is an Open Society fellow based in New York and the author of "The End of Tolerance: Racism in 21st Century Britain."

Since the end of the Cold War, conservatives have argued that the world should be seen through the lens of a clash between civilizations. The world could be divided, they argued, on the basis of different cultures and their distance from Western values.

Countries where the majority of the population is Muslim were grouped together as the 'Islamic world' and seen as culturally prone to fanaticism and violence. Revolution there could only mean Islamic revolution along the lines of Iran in 1979. Democracy could only emerge if imposed by force from outside, as disastrously attempted in the Iraq War.

Liberals had their own version of such thinking, particularly after 9/11. Rejecting the necessity of a clash between civilizations, they spoke of a dialogue between civilizations. But they shared with conservatives the assumption that culture was the primary driving force of political conflict.

There was something of this thinking in President Obama's famous 2009 speech in Cairo, addressed to "the Muslim world." Liberals like Obama thought it possible that dialogue could allow for the peaceful co-existence of cultural differences between Muslims and the West. Conservatives, on the other hand, feared that no dialogue was possible with Islam, and it was better for the West to ready itself for inevitable conflict.

Muslims and Christians have marched together on the streets.
--Arun Kundnani

These have been the terms of debate between liberals and conservatives since 9/11.

Significantly, both sides in the debate assumed that the fundamental divisions in the world were cultural rather than political.

In the case of the Middle East, conflict was seen as rooted in a cultural failure of Islam to adapt itself to modernity, rather than a political aspiration to freedom from regimes the West was backing.

The Egyptian revolution has finally demonstrated in practice that this cultural assumption no longer holds. Popular sovereignty, not God's sovereignty, has been the basis of the revolution. Muslims and Christians have marched together on the streets. The slogans have been universal demands for rights, dignity and social justice. At the same time, the Muslim Brotherhood has been one among the many strands of the movement, accommodating themselves to its democratic and pluralist thrust.

All of this confounds the "clash of civilizations" thesis which holds that the 'Islamic world' has necessarily "bloody borders." It also confounds the "dialogue of civilizations" approach, which seeks to address the people of the Middle East as a culturally distinct "Muslim world" rather than as populations whose demands are political and universal.

It is no surprise that the Obama administration's response to the fall of Zine El Abidine Ben Ali in Tunisia and Hosni Mubarak in Egypt has been muddled; its working assumptions about the 'Muslim world' have collapsed as a result of the revolutionary movements in Tunisia and Egypt.

Equally, the confused response of conservatives reflects the fact that their framing of the Middle East as a hotbed of fanaticism has been revealed to be a myth. And they are exposed for backing an autocrat for narrow strategic reasons linked to protecting Israel. For all their rhetoric, the real fear of conservatives is not the "Muslim fanatic" but genuine political freedom for the Arab nations -- which is now suddenly imaginable.

The opinions expressed in this commentary are solely those of Arun Kundnani.