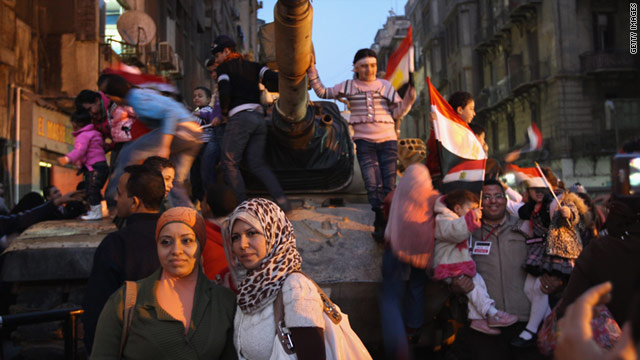 Egyptians pose for photos atop and around an Egyptian army tank on Sunday in Cairo.
STORY HIGHLIGHTS

Editor's note: Joseph S. Nye is a professor at Harvard and author of the new book "The Future of Power." In 1993 and 1994, he was chairman of the National Intelligence Council, which coordinates intelligence estimates for the president. In 1994 and 1995, he served as assistant secretary of defense for international security affairs.

Cambridge, Massachusetts (CNN) -- Egypt's revolution is momentous. In 18 days, a broad-based, nonviolent social movement overcame an entrenched, autocratic government. However, we are still in the first act of a long play.

As President Barack Obama noted in welcoming the revolution, nonviolent moral force "bent the arc of history," but genuine democracy will require revising the constitution in Egypt and laying out a clear path to elections that are fair and free.

For now, the military is in charge. It is unlikely that the Egyptian military will act like the Chinese at Tiananmen Square or the Iranian government in suppressing its opposition, but will the Egyptian army act like the South Korean military in the 1980s and usher in a genuine democratic process? And even if they do, could the process be hijacked by well-organized minorities as other revolutions have been in history?

Until recently, many observers of the Middle East argued that the United States had to support the authoritarians or wind up with radical Islamists. But the Muslim Brotherhood has not taken the lead in Egypt, and a recent poll by David Pollock of the Washington Institute shows their support is limited to about 15% of the urban population.

The old view of polar extremes has been overtaken by the spread of information that has helped create and empower a new middle ground in Egypt and elsewhere. There are more options now, some good and some bad, but it is clear that a smart foreign policy in an information age will need a more sophisticated understanding of power.

In an information age it may be the state (or non-state) with the best story that wins.
--Joseph Nye

We have to deal with governments and civil societies of other countries, thinking simultaneously in terms of hard power instruments such as military aid as well as the soft power tools of narrative and values. Whatever the outcome of this moment, Egypt illustrates the broader way that an information revolution is transforming world politics.

The problem for all states in today's global information age is that more things are happening outside the control of even the most powerful governments. In an information-based world, power diffusion is a more difficult problem to manage than power transition.

Conventional wisdom has always held that the government with the largest military prevails, but in an information age, it may be the state (or non-state) with the best story that wins. Soft power becomes a more important part of the mix.

Governments remain the dominant actors on the world stage, but they are finding the stage far more crowded and difficult to control. A much larger part of the population both within and among countries has access to the power that comes from information as Tunisia and Egypt have demonstrated.

Governments have always worried about the flow and control of information, and the current period is not the first to be strongly affected by dramatic changes in information technology. Gutenberg's printing press helped to pave the way for the Protestant Reformation in the 16th century. Revolutions are not new, nor are transnational contagion or non-state actors who play a key role in world affairs.

What is new -- and what we saw manifested in Egypt -- is the speed of communication and the technological empowerment of a wider range of actors. An information world will require new policies that combine hard and soft power resources into smart power strategies. That is the larger lesson of the revolution in Egypt.

The opinions expressed in this commentary are solely those of Joseph S. Nye.