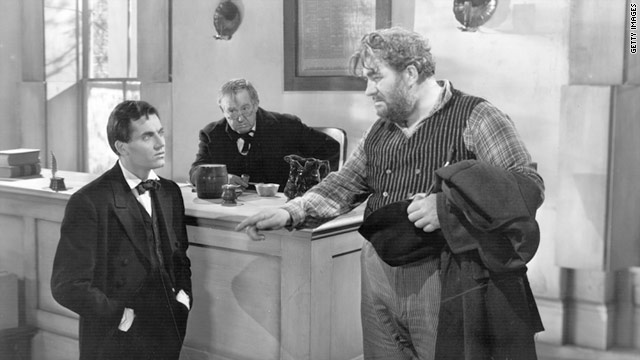 Editor's note: CNN Contributor Bob Greene is a best-selling author whose books include "Late Edition: A Love Story" and "Duty: A Father, His Son, and the Man Who Won the War."

(CNN) -- So there is Abraham Lincoln -- Henry Fonda, actually, in a stovepipe hat -- walking toward the horizon as the gorgeous strains of an orchestra swell up behind him. Soon the orchestra is joined by a choir, the strings and the voices blending into a beautiful, almost ethereal, rendition of "The Battle Hymn of the Republic." Thunder crackles in the cinematic sky.

Monday is Presidents Day, and in anticipation I treated myself to a viewing of "Young Mr. Lincoln," the 1939 movie about the 16th president's early life as a lawyer in Illinois. The film was purposefully inspiring, of course, sentimental and warmhearted. As it concluded -- the viewer was left to surmise that where Lincoln was heading, bathed in all that music and all that thunder, was toward his, and the nation's, future -- the thought occurred that such movies may be a thing of the past.

Not movies about Lincoln; there will always be a market for those, and in fact a spate of them are said to be either in production or in the planning stages. But uplifting feature-film biographies about more contemporary presidents -- life stories told admiringly, earnestly, with the intent to attract paying customers to brick-and-mortar movie theaters -- seem now to be an anachronism. And it may be worth taking a moment to ask ourselves whether this is the fault of our presidents, or of the times we live in, or of us.

Such movies -- the life stories of the presidents, delivered straight and with an implied crisp salute of respect -- were once a staple of the American entertainment menu: "Sunrise at Campobello," about Franklin Delano Roosevelt, "PT 109," about John F. Kennedy, the various Lincoln movies ("Abe Lincoln in Illinois" followed "Young Mr. Lincoln" into theaters just one year later) ... there was even, in the 1940s, a big-budget film about the life of Woodrow Wilson. The assumption seemed to be that American audiences out for the evening longed to be edified by rousing tales of the men who had made it all the way to the White House. The movies played it literal and clear-eyed; presidents, on the screen, were people to be highly regarded and emulated.

But starting with "All the President's Men" and the era it depicted, that changed. Suddenly moviegoers seemed to feel that before they even bought their tickets they already knew enough -- too much -- of the officially sanctioned versions of the presidents' lives. Oliver Stone made his three presidential movies -- "JFK," "Nixon" and "W."-- and there was no danger that they would ever be confused with "Young Mr. Lincoln."

It is difficult to even imagine any contemporary president getting the full-out reverential feature-film treatment in the new America; quite apart from the specific qualities and flaws of our recent presidents, one reason we're unlikely to see such movie-theater renditions of their lives is that since the 1960s we have gazed upon our actual presidents so continually on television that the real men have become quasi-movie stars by default. We have seen their movies, in nightly newscast installments.

Television itself, both cable and over-the-air, has often been an easier place for scripted presidential biographies (and for documentaries) to find a home, but even that has come into question. Television projects about Ronald Reagan and about JFK have run into much-reported turmoil because of the political passions the portrayals have aroused in people who believed that the films were intended to be knife jobs, aimed at men whose reputations their supporters were determined to defend.

Presidents will continue to make their way to movie-theater screens; "Frost/Nixon" was a wonderfully written and acted drama, but Richard Nixon, audiences knew in advance, was going to come out the vanquished, the foil. There will always be a place for valorous fictionalized presidents-who-never-were; "The American President," "Dave," "Air Force One"-- ticket buyers will never lose their willingness to root for a cinematic president who in real life never held office.

But the main reason we may not see blithely laudatory feature film bios in the future is that they might risk drawing laughs from (or inciting fistfights among) the conditioned-to-be-reflexively-partisan audience members out in the dark. Show-business executives seem to have concluded that our contemporary presidents of the post-Eisenhower years simply won't pass marketplace muster as box-office heroes anymore. For better or for worse, we may feel that we have become too smart for that.

It makes you wonder, were Lincoln to be elected president in the 21st century, if even he would have a chance of making it to the big screen in a way that would exalt him. Our flesh-and-blood presidents are no longer who Hollywood likes to glorify; maybe if they were cyborgs, they'd be an easier sell.

The opinions expressed in this column are solely those of Bob Greene.