By A. S. Hamrah, Special to CNN 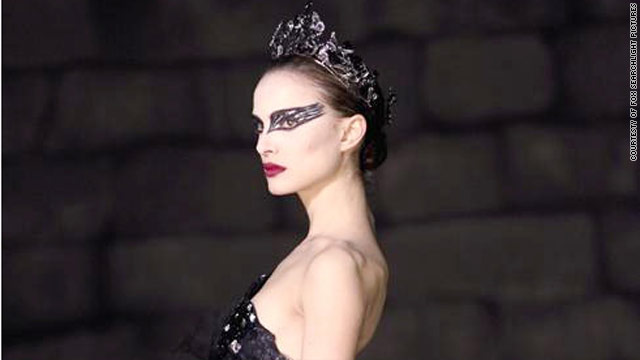 Natalie Portman is nominated for an Oscar for her performance in "Black Swan."
STORY HIGHLIGHTS

Editor's note: A. S. Hamrah is film critic at n+1, a print magazine of politics, literature and culture published three times a year. He edits the magazine's film review publication, the N1FR, and lives in Brooklyn, N.Y.

New York (CNN) -- The annual Oscars telecast is a weird combination of fashion show, variety show and industry party. Since the vast majority of viewers around the world will not have seen most of the films nominated for awards, it's no wonder most of their interest lies in seeing what famous people are wearing.

But the show's writers have to find a way to describe all the nominated films so the stars presenting the awards will have something to say after they tell their jokes. Everyone knows this shorthand: Films are heartwarming, about underdogs. They explore things, lift the spirit, affirm.

In years past -- last year, for instance -- the nominees have usually been disparate, reflecting various hopes and dreams, but still mostly the hopes and dreams of studio executives. "The Blind Side," "UP" and "Avatar" didn't have much in common.

This year, things have changed. In the absence of epic fantasy, superhero movies, feel-good drama and indie quirk, the academy has chosen to recognize a group of films that are complex and severe by Hollywood standards, films that show us dark things about society, the family and the individual's place in the world.

A night for Oscar

Bullock: Motherhood made me better

Picking these films shows that somehow Hollywood has gotten word that things are not what they were. It is as though an era (roughly corresponding with the last Bush presidency) of contained entertainment featuring happy middle-class people is over, at least at this level of filmmaking.

In the past directors may have turned to escapist fare to find some fun during life's rough spots -- a down economy, wars -- but not this year. Directors are poking under the rock to see what's been hidden under there all along.

Let's call these films 3D movies: disintegration, devaluation and demoralization. To watch these movies, you have to take off your polarized glasses.

The 10 films nominated for Best Picture, along with the ones singled out for actors' performances, all deal with disintegrating or uncertain families, or with young men and women suddenly thrust into the world on their own once they've realized their families have become their captors.

On the slightly more well-adjusted end, we find "The Kids Are All Right," in which an unhappy lesbian couple with two teenagers is thrown into confusion when the women meet their children's natural father.

Annette Bening plays a masculinized mother in that movie, scary at times, but a beacon of sanity compared with the mothers in "Black Swan," "The Fighter," "Animal Kingdom," "Winter's Bone," and "Inception," a gaggle of frightening harridans and depressives the likes of which have never been rounded up in a cinematic year before this one.

Fathers are mostly absent or about to disappear, like Javier Bardem in "Biutiful."

"Normal" families are coming apart at the seams in "Rabbit Hole" and "Blue Valentine," while in certain extreme cases, like in "Animal Kingdom" (a best supporting actress nomination) and the amazing Greek film "Dogtooth" (best foreign film nominee), families are actively repressive and threatening their children's well-being.

Young men are on their own, like the canyoneer James Franco plays in "127 Hours" and Jesse Eisenberg's Mark Zuckerberg in "The Social Network" (ironic title, that). Even Andy in "Toy Story 3" realizes now is the time to put away childish things and move away from his family.

The younger sisters of these characters in movies like "True Grit" and "Winter's Bone" are prematurely adult and in charge. Even in the Disney "Alice in Wonderland" reboot, Alice is now 19 and about to say no to her family and fiancé.

These films are almost all set against the backdrop of a devalued, dirty America (or Spain or Australia) where no one has regular jobs. In these films, people fill their days with low-grade crime, booze and drugs.

The films that don't take place in squalor play out in closed and emptied spaces, or in dreamscapes of collapse, like the ones in "Inception." "Black Swan" manages to make the once-dainty world of ballet grimy, sweaty and bloody. Who knew it could be so claustrophobic and terrifying?

All these films are of a much higher-grade than the usual Hollywood fare. Some of them represent their directors' best work so far. Flashy, inconsistent auteurs like Danny Boyle, Alejandro González Iñárritu, David Fincher, David O. Russell, Darren Aronofsky, and even Christopher Nolan have found greater focus and purpose in them. But they are no picnic -- they are like what's left after a picnic.

The Best Documentary Feature nominees are especially bleak and demoralizing. "Gasland" presents an America ruined by industrial pollution, while "Waste Land" investigates one of the world's largest garbage dumps.

At the opposite end of the cinematic spectrum, the beloved cartoon toys in "Toy Story 3" also spends a lot of time in a dumpster, in a garbage truck, at the dump and, in a scene pretty harrowing for this franchise, on their way to being burned up in an incinerator.

It's been a tough year, movie lovers. It's coughed up gritty films newly unafraid to step up and tell the world things are going to get tougher and we better get ready, just like Colin Firth's George VI in "The King's Speech."

Too bad he's not hosting the Oscars. The way he talks would have been perfect to introduce these films that get caught in your throat.

The opinions expressed in this commentary are solely those of A.S. Hamrah.