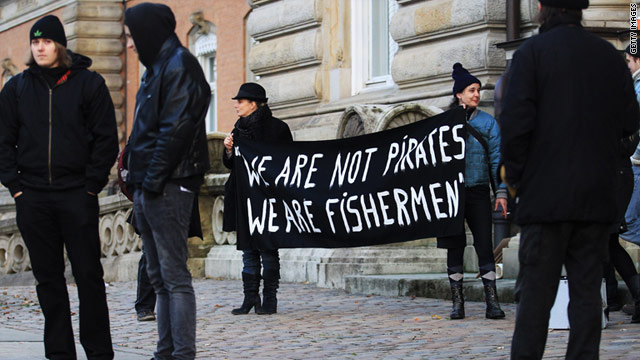 (CNN) -- The U.S. Navy has warships in the seven seas to help ensure peaceful passage all over the world. Yet pirates such as the ones who killed four Americans Tuesday are terrorizing an ever-larger number of shipping lanes.

According to a U.S. naval source, more than 200 other attacks a year have not been reported because such reporting "is bad for business." The ransom that pirates demand and get has increased from several hundred thousand to several million dollars per crew.

Above all, the pirates mock the notion that the U.S. is a superpower, as a bunch of young men, riding tiny boats, lightly armed, seem unstoppable.

One reason, we are told, is that because the oceans are so large, we have a hard time finding the pirates. One cannot but wonder, if all our satellites, AWACs, radar and sonar cannot help us locate a few boats, what we will do if agents of a foreign power, using similar boats only with stronger engines, attack our ships? Even more puzzling is, why do we need to find them? They regularly present themselves. After all, to take hostages, they must close in on ships.

All we need to do is declare that for ships on the high sea, a 300-yard radius around the vessels is a limited access zone. Anybody closing in farther without permission will be assumed to be hostile. First, warning shots will be fired across their bow; if this will not do, shoot to kill.

True, this means that merchant ships will need some armed marshals, as do many flights. However, given that the ships are tall and the pirates need to mount them from their small boats, a few armed guards can do the job.

Piracy has for centuries been considered a serious offense by most, if not all, states, and pirates were regularly killed or executed after, at most, a perfunctory hearing by the captain of the ship that captured them. Today, pirates are rarely confronted aggressively, and even when they have been caught, many have simply been released. As maritime law expert John Burnett refers to it, pirates are treated with a "catch-and-release philosophy that's usually reserved for trout."

For example, in May 2009, Portuguese forces found automatic rifles, rocket-propelled grenades and dynamite on the mother ship of pirates they had chased away from a German tanker. The Portuguese disarmed the pirates and set them free.

Canadian forces boarded a pirate vessel in April 2009, confiscated weapons and let the pirates go. In April 2009, Dutch forces set free pirates who had been holding hostages onboard a ship. In April 2010, U.S. naval forces captured 11 pirates, ensured that they did not have the ability to attack any ships, destroyed their mother ship and then released them.

The main reason for all this is that we are concerned -- about the pirates' rights. They are said to be criminals and not terrorists and hence should be brought to a civil court of law before they can be judged. However, collecting evidence on the high seas is difficult. The pirates often dump their weapons if they are about to be caught and then claim to be fishermen. Moreover, if they are brought to a country and found not guilty, they are said to have a right to seek asylum -- on the grounds that their country is an unsafe place to be.

The U.S. tried to farm out the trial of pirates to Kenya, but human rights activists questioned the fairness of the prosecutions. One NATO member claims that the army cannot go after pirates because they are criminals, and the police cannot go after them because they have no jurisdiction outside their respective homelands.

As I see it, pirates should be treated like terrorists. They do terrorize innocent civilians: plying their trade, shooting people like the four Americans just killed. They should be duly warned to stay away from ships on the high seas -- and that if they do not, they should be aware they can be shot on sight.