How a tsunami can strike within minutes 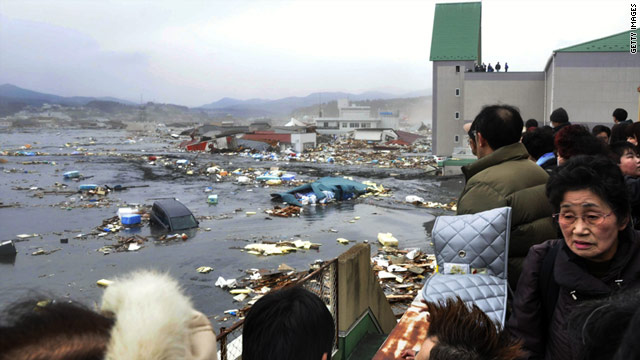 (CNN) -- The world is much better prepared today for dealing with the far-away effects of a tsunami, but the severe underwater earthquake Friday would have given residents of nearby northeastern Japan only minutes to respond to a destructive wave of water, according to civil engineering expert Philip Liu.

A professor and director of the School of Civil and Environmental Engineering at Cornell University, Liu has studied the impact of the tsunamis in the Pacific region. He led a team that went to Sri Lanka to assess the damage after the December 26, 2004 quake near Sumatra that triggered a tsunami, killing more than 200,000 people in the region.

He said residents of some coastal areas near the source of the earthquake off Japan's coast would have had only five minutes, or less, to try to get to higher ground to escape the wave of water. Liu spoke to CNN Friday.

CNN: Based on what you're hearing at this point, how do you assess the situation?

Philip Liu: Obviously it's a devastating earthquake and ... it's going to have widespread effects in the Pacific rim area. But fortunately we have a lot of advance warning and over the last few years, we have established all these early warning systems, and communities have established mitigation plans and evacuation plans.

CNN: What was the big lesson from the 2004 tsunami?

Liu: When the 2004 earthquake happened, that region was just not prepared at all, there was no warning system. People did not believe that such a magnitude tsunami would ever really happen. For this particular event, we know that that region has been very active and the Japanese did a lot of research, a lot of preparation for this kind of event.

Oil refinery on fire in Japan

After 2004, we established the whole Pacific Ocean tsunami warning system, and now we can actually send out all these advance warnings and get a message out to remote areas. So it's a totally different situation and we're in much better shape.

CNN: You've seen the videos which show the impact of the tsunami within Japan itself. Can you comment on that?

Liu: This is very clear evidence of how strong the currents driven by a tsunami can be. We saw in the videos that the flow rate is very high, there's lots of debris which will cause more damage.

CNN: What causes a tsunami?

Liu: An underwater earthquake. This occurred in a well-known subduction zone offshore the northern part of Japan. Historically this area has been very active. When the earthquake occurred, the sea floor was deformed and that pushes water up and that's basically how the tsunami was generated.

CNN: What causes the sea floor to become deformed?

Liu: It's a subduction zone -- that means the ocean plate is going underneath the continental plate in this region. There's a lot of energy being stored in this region due to the motion between these plates. And at a certain point, when the strain is too large the plates start to rebound. That's when an earthquake occurs. Now when the plate starts to rupture, that means the sea bottom, the ocean bottom, is going to go up and down. When that happens, the water above the sea floor will respond to it, and that's when the large amount of water is being pushed from the earthquake rupture region, and will form these large ocean waves or tsunamis.

CNN: How high are the waves?

Liu: It varies quite a bit from region to region. In the earthquake region, I don't have real data yet, but usually a couple of meters in the source region. But that's misleading. When these waves get into the shallow water, the coastal region, it becomes huge because of the shallow water depths. It's not just the wave height, it's the speed of the current, which is very important in terms of causing damage, just because of the sheer amount of water involved in this tsunami movement.

CNN: Do you have an idea of what the range of the currents can be?

Liu: I have no data yet but it can go up to 10 meters per second easily, perhaps even more in some local places. That really depends on the topography.

CNN: The early warning system can protect Hawaii or the Philippines, but is there anything that can be done for the nation that is most directly affected such as Japan?

The Pacific ocean warning system I'm talking about was established by the United States. They deploy many deep ocean sensors around the Pacific Ocean rim that will measure the surface elevation to determine whether there is a tsunami or not. That's very important for Hawaii or the West Coast of the United States because it can take many hours for the tsunami to reach the remote areas.

CNN: What determines the severity of a tsunami?

Liu: Relative location to the earthquake source. Part of the early warning system is to do a quick estimate of the arrival times for a tsunami, and a rough estimate on the wave heights for the locations, but those are rough estimates of the wave height. When you get to the local remote area where the topography plays an important role that becomes a little harder to say. Arrival times and amplitudes in the deep ocean can be estimated pretty well.

It's very hard to predict exactly what will happen when a tsunami reaches any location. There are many factors such as the wave height, water depth, velocity, also the land form configuration, such as whether you have a narrow bay or harbor. These will all affect the consequences. ... For example, if the land form is like a funnel and the waves converge into a specific location, that will cause locally large waves which might not be the case in a neighboring area.

CNN: What did you observe when you went to Sri Lanka?

Liu: They never had a tsunami before, people were not prepared at all. People were curious about what happened, so they didn't do the right thing -- they went to the water rather than running away from the water, that caused a lot of the deaths. Preparation, education are very important components of a hazard mitigation program.