Japan quake: It could have been even worse

By Leonardo Seeber, Special to CNN 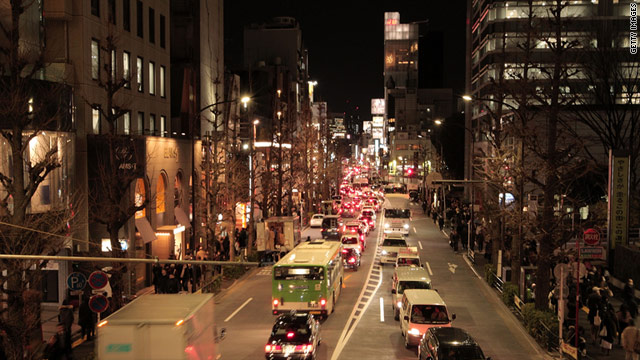 Pedestrians and cars make their way in Tokyo after train services are suspended following the earthquake.
STORY HIGHLIGHTS

Editor's note: Leonardo Seeber is a seismologist and Research Professor at the Lamont-Doherty Earth Observatory of Columbia University.

Tokyo, Japan (CNN) -- The shaking was steadily intensifying as smiles dried up on the faces of my colleagues at the conference on -- what else? -- the 2004 Sumatra earthquake and tsunami.

We were in a new building on the campus of Tokyo University. Shiny floors, spotless bathrooms and talking elevators made me chuckle when I first arrived in Japan from chaotic Dhaka, Bangladesh -- also a huge city, but at the opposite end of the cultural spectrum, where survival seems to depend more on wit than social structure.

As the shaking got louder, I was looking at the walls around us wobble and crackle and I became humbly appreciative of the rule-abiding mind-set projected by the thick columns of reinforced concrete.

Like Californians, the Japanese have been serious about earthquakes and it was now paying off. The statistics are clear. Even though the attention is riveted on the bad news of the tsunami devastating coastal towns, some of what is happening is very uplifting.

Like Californians, the Japanese have been serious about earthquakes and it was now paying off.
--Leonardo Seeber

A day of destruction in Japan
RELATED TOPICS

People are not being crushed under buildings, despite a huge earthquake at striking distance from a megalopolis of 30 million. Considering the size of the phenomenon and of the city affected, Tokyo came through largely unscathed.

The number of victims quoted so far is in the range of 1,000, mostly from the tsunami. Given the extent of the damage this number may speak to an effective tsunami-warning system. My impression so far is that the Japanese investment in earthquake risk reduction is paying off handsomely.

In a couple of days, I'll be back in Dhaka. Trying to predict how that city would have fared in this earthquake is a disturbing yet urgent task. The small but densely crowded Bangladesh is along the same plate boundary that ruptured along Sumatra in 2004 and faces a serious earthquake risk.

The rush to urbanization is leading people from earthquake-safe grass huts into a deadly trap of concrete. Unfortunately, the media coverage is not helping those and many other people in similar circumstances globally to realize from the events in Tokyo that earthquake risk reduction is cost-effective and a good investment.

Opinion: How a tsunami can strike in minutes

We finally did rush out of the conference room and the building. Despite the excitement and the cold, the conversation wandered onto a key question: What can we do as geoscientists?

One contribution is obvious: We can provide a more realistic scenario of likely earthquakes or other potentially disastrous events so that engineering remedies can be cost effective.

The right balance is critical for remedies to be adopted and to be effective. Another contribution is more subtle, but possibly as important. Strength and optimism are necessary to start healing wounds and picking up the pieces. We can help regaining a sense of control by going over and under the ocean, dissecting and accounting for the culprit natural event. A key role of modern science is to maintain a safe bridge between the engineered and natural worlds.

The opinions expressed in this commentary are solely those of Leonardo Seeber.