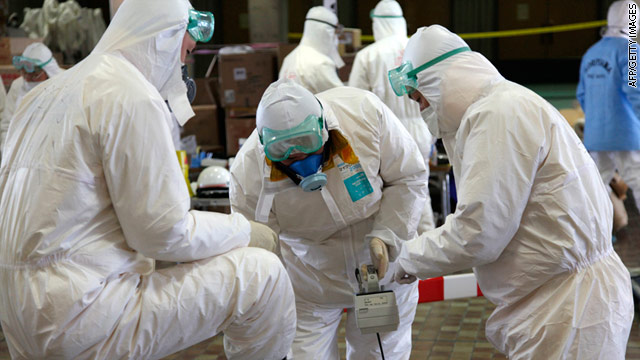 (CNN) -- When she was an adolescent, Helen Caldicott says, she read the nuclear apocalypse novel "On the Beach." The story was set in the aftermath of an atomic war; the protagonists must await the arrival of a deadly fallout cloud.

It was a formative event, she says, and later, in medical school, the connection between health and nuclear energy would galvanize her. "I learned about genetics and radiation in first-year medicine and became acutely aware of nuclear weapons, nuclear war and the damage radiation does to genes and all life forms."

Caldicott went on to become one of the most vocal, ubiquitous and controversial opponents of nuclear power during the anti-nuclear movement of the 1970s and 1980s.

The crisis at the Fukushima Daiichi Nuclear Power Station, severely damaged after the earthquake and tsunami in Japan, has given a fresh urgency, she says, to a "medical problem of vast dimensions," highlighted by reports that emerge daily on the spread of radiation.

A pediatrician, Caldicott came from her native Australia to become an instructor on the faculty of Harvard Medical School, where she specialized in the treatment of cystic fibrosis at the Children's Hospital Medical Center. She soon helped revive the moribund Physicians for Social Responsibility, a health organization dedicated to halting the proliferation and use of nuclear weapons and nuclear power.

While she was president, from 1978 through 1984, the group grew to 23,000 physician members and in 1985 shared in a Nobel Peace Prize with International Physicians for the Prevention of Nuclear War. "We led the nuclear weapons freeze movement with many other professional groups," she said. "I think we helped to end the Cold War."

Caldicott, who lives in Australia and the U.S., remains engrossed in the anti-nuclear issue, heads the Helen Caldicott Foundation for a Nuclear-Free Planet and regularly lectures around the world on its dangers. She's written seven books, including "If You Love This Planet: A Plan to Heal the Earth" and "Nuclear Power Is Not the Answer."

CNN spoke with Caldicott ahead of a talk she was giving in Camden, New Jersey.

CNN: What is the health risk for people living near the Fukushima Daiichi plant?

Helen Caldicott: The risk cannot be determined with any accuracy yet, because it is not clear how much radiation has or is escaping. NPR reported last week that 17 workers have suffered what the Japanese government called "deposition of radioactive material" to their faces. And some plant workers have already been hospitalized for exposure to radiation, which means they received a huge dose of radiation.

High levels of exposure can cause acute radiation sickness, a syndrome first recognized by the medical profession after Hiroshima and Nagasaki. It can have terrible effects. In two weeks, victims' hair begins to drop out. They develop hemorrhaging under the skin, severe nausea and diarrhea and may eventually die from bleeding or infection.

If a meltdown occurred at the plant, a large number of people could be exposed to high doses of radiation in this region, one of the most heavily populated in Japan. (After the March 11 earthquake, the Japanese government evacuated people living within a 20-kilometer radius to mitigate the possibility.)

Men exposed to such a dose would be rendered sterile, women would stop menstruating, and spontaneous abortions would likely occur. Babies could be born with microcephaly, with tiny heads and mental disabilities. Many people would develop acute shortness of breath from lung damage. In five years, there would be an epidemic of leukemia, and in 15 years, solid cancers would start appearing in many organs: lung, breast, thyroid, brain and bone.

Even if the release is not huge, the incidence of cancer and leukemia will increase in the population. Children are 10 to 20 times more sensitive to the carcinogenic effects of radiation than adults, and fetuses thousands of times moreso because their cells are rapidly dividing and are thus vulnerable to genetic mutations. Genetic diseases, like cystic fibrosis, diabetes, dwarfism and metabolic disorders, will be passed on to future generations.

There is no way to decontaminate exposed people once they inhale or ingest radioactive elements, which are dispersed throughout the body to many different organs.

CNN: How is this disaster comparable to the accidents at Chernobyl and Three Mile Island?

Caldicott: The radiation monitors at Three Mile Island went off the scale within minutes of the accident, so releases were only guesstimates by physicists. But almost certainly, radioactive elements like strontium 90, cesium 137 and tritium escaped. Chernobyl had a full meltdown and rupture of the containment vessel, and fallout contaminated 40% of Europe and England.

There are six reactors at the Fukushima Daiichi Plant No. 1 in Japan, and their spent fuel pools, which contain highly radioactive fuel rods, are also at risk of melting down. These pools contain two to 10 times more radiation than in the reactor core, which itself contains as much long-lived radiation as 1,000 Hiroshima bombs.

CNN: Is it possible to have a safe nuclear power plant?

Caldicott: No. They are very complicated machines containing the energy released when an atom is split: Einstein's formula e=mc², the mass of the atom times the speed of light squared. Anything can go wrong: natural disasters, failure of cooling systems, human and computer error, terrorism, sabotage. Radioactive waste must be isolated from the ecosphere for half a million years or longer, a physical and scientific impossibility, and as it leaks it will concentrate in food chains, inducing epidemics of genetic diseases, leukemia and cancer in all future generations, the greatest public health hazard the world will ever see.

Einstein said, "The splitting of the atom changed everything save man's mode of thinking; thus we drift towards unparalleled catastrophe." He also said, "Nuclear power is a hell of a way to boil water."

CNN: Doesn't every form of energy production involve some risk, as we saw with the oil spill in the Gulf?

Caldicott: Well, that was dreadful. But to leave a legacy of huge vats of leaking radioactive waste around the world, inducing epidemics of malignancy and random compulsory genetic engineering, is a legacy for which future generations will be distinctly ungrateful.

CNN: Is there any other aspect of this event that we should be paying attention to and are not?

Caldicott: No, except that the media keep interviewing nuclear engineers and physicists, but in truth this is a medical problem of vast dimensions.