De la Hoya: The trip that changed my life 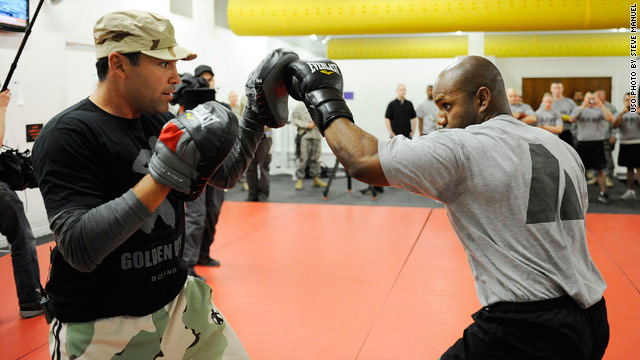 (CNN) -- I will never forget my recent USO tour to Kuwait and Iraq.

At first, I was embedded with the 36th Infantry Division in Iraq, a group from the Texas Army National Guard. Sgt. 1st Class John Harris was responsible for my protection on my first evening. Harris, accountable for 20 or so soldiers, is on his third tour to Iraq and believes in his mission and his commitment to his country.

He introduced me to his son, who had recently been deployed to Iraq and joined the same unit Harris commanded. I could tell he was moved and filled with pride having his son with him.

He told me he loved spending time with him, but admitted that when their base is under fire, it is difficult for him to maintain his role as unit commander without his mind flashing to his son and his well-being for a moment.

As I sat and listened to Harris' story, I began to truly understand the meaning of sacrifice. As a father, I imagined what life would be like to be with my own son in this environment. In less than 24 hours, I would leave the 36th Infantry Division and take off in a Blackhawk helicopter to the next of eight bases. Meeting Harris was just one of the countless encounters I will never forget.

I had asked to go to the most dangerous parts of the country, to visit with troops who might not get as much attention as others. In Basra, our camp had been shelled by insurgents. I could hear explosions in the distance, but felt safe under the protection of our brave men and women.

At Camp Justice, I was given the honor of awarding medals to soldiers being promoted in the ranks. Eating with the troops and sitting and listening to their stories was incredibly rewarding. We talked sports, many asking about my most recent fights against Floyd Mayweather and Manny Pacquiao. Some had enlisted in the Army, while others were citizen soldiers from the National Guard deployed to Iraq, putting their jobs and family lives on hold. They were upbeat, positive and no one had anything negative to say about the job. Most were on their second tours of duty.

Near the end of my USO tour, I was embedded with troops from the 1st Battalion, 7th Field Artillery Regiment. Before my departure, the unit's commanding officer pulled me aside. He had a favor to ask.

Just months before, one of the soldiers in the unit had been killed by a homemade bomb while on patrol. The soldier was a native of California, where I was born, raised and live. He told me the soldier's grieving family had been forced to move on with their lives, and asked if I would consider contacting them directly to let them know I had been with their son's unit and had seen where he lived during his tour of duty.

I was honored. I'm working with USO and Army officials to arrange an introduction. When we hear about soldiers killed abroad, it does not hit home. We don't think about their families. It is important we take a moment to reflect each day about those serving our country.

I have represented our country, not on the battlefield, but in the ring, by winning a gold medal at the 1992 Olympics. After my fight I returned home to friends and family. After the USO tour, I also got to come home. Our troops do not have the same luxury. They return to work each day to face the same dangers as the day before. Their bravery and dedication deserve our attention. They allow us to live freely and safely in our country.

My trip changed my life. Shaking thousands of hands around the Middle East, putting on boxing clinics in Kuwait and Iraq, giving back in the smallest of ways, rewarded me in ways knockouts in the ring never could. These military men and women are without a doubt our nation's finest. They deserve our admiration and more of it.

The opinions expressed in this commentary are solely those of Oscar de la Hoya.