By James DeWolf Perry and Katrina Browne, Special to CNN 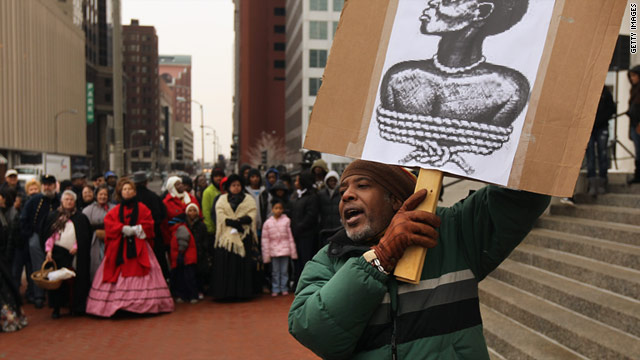 A man protests a slave auction re-enactment in St. Louis, Missouri, held to observe the 150th anniversary of the Civil War.
STORY HIGHLIGHTS

Editor's note: James DeWolf Perry and Katrina Browne work at the Tracing Center on Histories and Legacies of Slavery and appear in Browne's PBS documentary, "Traces of the Trade: A Story from the Deep North." They are descendants of the DeWolf family of Rhode Island, which from 1769 to 1820 brought more enslaved Africans to the Americas than any other family.

(CNN) -- This week marks the 150th anniversary of the outbreak of the U.S. Civil War, a war that redefined national and regional identities and became an enduring tale of noble resistance in the South and, for the rest of the country, a mighty moral struggle to erase the stain of slavery.

On April 12, 1861, Confederate forces opened fire on the beleaguered Union garrison at Fort Sumter, South Carolina. By April 14, the fort had fallen and the war had begun in earnest.

By the time Fort Sumter was again in Union hands, following the evacuation of Charleston in the closing days of the war in 1865, the war had become the bloodiest in the nation's history -- and has not been surpassed. Yet the relationship of the North to the South, and to slavery before and during the war is not at all what we remember today. The reality is that both North and South were profoundly complicit in slavery and deeply reluctant to abolish our nation's "peculiar institution."

To see this, start by considering the response of New York City to secession. On January 7, 1861, after the secession of South Carolina but before any other state joined in rebellion, Mayor Fernando Wood delivered his annual message to the New York City Council. Would the mayor of the largest and wealthiest northern city denounce the southern cause? Rally his fellow citizens around the Union and its president-elect, Abraham Lincoln? Perhaps lament the necessity of a bloody moral struggle to abolish slavery?

Both North and South were profoundly complicit in slavery and deeply reluctant to abolish our nation's 'peculiar institution.'
--James Perry and Katrina Browne

Civilians reenacting war as a hobby

Wood did none of these things. Instead, he announced that New York offered "friendly relations and a common sympathy" with the "aggrieved brethren of the slave states." He then offered the bold proposal that New York City secede, as well, forming an independent city-state. This move, he argued, "would have the whole and united support of the southern states" and would allow the city to avoid breaking off its existing relationships with the slave states.

Of course, New York did not secede from the Union. But why did this northern mayor, along with many of his fellow citizens, so dramatically embrace the southern cause?

The first answer is cotton. Cotton -- southern, slave-picked cotton -- was the mainstay of New York City's antebellum economy, and indeed, of the North's. In 1860, the South produced 2.3 billion pounds of cotton, accounting for two-thirds of world production and more than half the value of all U.S. exports. Most of this wealth, however, flowed north and west, as these regions provided the financing, insurance, marketing, transportation, foodstuffs and manufactured goods for southern slave plantations. Even the growing industrialization of the North took the form of cotton textile mills, which were dependent on southern cotton production.

The critical linkage of northern industrialization and southern slavery, while generally ignored or downplayed in the past, has been drawing increasing attention from historians, as brought out at a conference on slavery and the U.S. economy this past week, organized by Seth Rockman of Brown University and Sven Beckert of Harvard University.

No one profited more handsomely from the cotton trade and the textile industry than New York's financial and maritime interests. Yet Wood was not in the pocket of big business; he was a populist supported by the city's working-class immigrants. New York's laborers, bolstered by waves of Irish and other immigrants, were just as dependent for their modest wages on King Cotton, and like other ordinary northerners, they knew it.

This leads us to the second answer: Racism. The North had seen slave-owning slowly fade away, and had grudgingly passed emancipation laws to gradually eliminate slavery over generations. Yet even as northern slavery was dying out -- indeed, precisely because it was -- free blacks in the North were increasingly ill-treated.

Draconian laws tightly controlled the lives and employment of free blacks, and black families were being driven out of northern towns by being deemed poor or disorderly or simply through armed attack. Finally, as the North began to erase responsibility for two centuries of slave-owning from its collective memory, an ideology of black racial inferiority arose to justify the impoverished conditions and harsh treatment of a free black population.

In the same vein, wealthy northern business interests had little regard for enslaved people in the South on whose labor their profits depended. And the working class viewed southern slaves not with sympathy, but as economic competition whose working conditions -- they mistakenly thought -- were no worse than those of northern "wage slaves." This is why New York City's working class, rioting against the Union draft in 1863, would turn to lynching free black men, women and children in the streets.

Abolition was a radical cause embraced by only a minority in the North. Northerners would march to war in vast numbers not to end slavery, but to preserve the Union.

The sesquicentennial of the Civil War -- 2011 to 2015 -- could easily become an occasion to rehash tired old myths: righteous northerners fighting to abolish slavery and proud southerners defending states' rights and the southern way of life. These beliefs provide each side with the smug view that history vindicates its actions and absolves it of responsibility for slavery.

Instead, let's use this anniversary to face and learn from our shared history in all its complexity. In this way, we can take a fresh look not only at the legacy of the Civil War for race in our society, but at lingering tensions between North and South, as well.