Is Trump playing us for suckers?

By Christopher Byron, Special to CNN 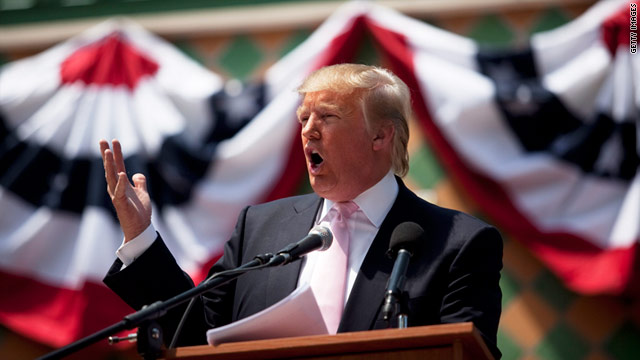 Editor's note: Christopher Byron is a prize-winning investigative journalist and New York Times best-selling book author. He has been a regular guest commentator on CNN, MSNBC, Fox News, and all three broadcast networks. He is completing his sixth book, "Mind Drugs, Inc., How Big Pharma and Modern Psychiatry Have Corrupted Washington and Destroyed Mental Health in America." Contact Byron at cmbyron@optonline.net

(CNN) -- The disappointing thing about most phonies is that they don't have staying power. Once they get caught, they give it up and skulk off into the night, never to be heard from again. Think of Rosie Ruiz, say, who pretended to win the Boston Marathon by sneaking out of a crowd of bystanders ahead of everybody in the last half-mile of the race.

That's why I like Donald Trump so much. When it comes to pretending to run marathons, he never quits.

For more than 20 years he's been periodically popping out of the bushes to declare that he "might" be running for president of the United States, or that he's "considering" it, or even considering it "very seriously," or (his ultimate statement of intent) really thinking about it "more seriously than ever before."

And wouldn't you know it, something always seems to come up at the last minute to change his mind, and he slips back into the bushes, having reaped an incalculable harvest of free publicity as the self-appointed loudmouth of the campaign, leaving behind nothing but the fading smile of the Cheshire Cat -- and of course those lingering questions about why his hair looks so weird.

Now, as the whole world knows, he's at it again, claiming to be "really serious" about "considering" whether to run for president, and planning to announce his decision sometime soon, like, say, in June.

Spitzer to Trump: Show us your net worth

Trump on the offensive

In the Short Attention Span Theater of American public life, people don't seem to remember that he's said it all before. It was just about a decade ago, in fact, that I interviewed Trump about his latest stated plan to "consider" running for president, and memorialized his malarkey in a cover story for John F. Kennedy Jr.'s magazine, George.

Readers of that article will learn that Trump has been playacting as a presidential contender for roughly the last 25 years, and behind each faux candidacy has been his desire to promote a specific moneymaking opportunity for himself.

In 1987 Trump published a self-celebration entitled "Trump, The Art Of The Deal," and when he hired Republican dirty trickster Roger Stone Jr. to begin floating his name as a possible 1988 presidential contender, the book surged instantly to the top of the best-seller lists.

Thirteen years later, he spotted an opportunity for himself to claim to be interested in running for president on the so-called Reform Party ticket -- a short-lived venture launched and then abandoned by Texas business biggie, H. Ross Perot. Why? As he put it to an editor at George, "It's a great way to raise the rents."

What's his angle this time around? My own best guess is to boost the ratings of his reality TV show, "Celebrity Apprentice," which airs on NBC. The show pays Trump a reported $3 million per episode. MSNBC talk-show host and Trump critic Lawrence O'Donnell is probably exaggerating when he says the show may be the only paying job Trump actually has.

But the truth is, no one is sure what Trump is worth. Forbes magazine puts his current net worth at somewhere around $2.7 billion; a 2005 report from Deutsche Bank put the number at $788 million.

Nor does there seem to be much consistency to his assertion that he's "very conservative" politically. In his pseudo-run for the presidency in 2000, he endorsed universal health care and a 14.25% one-time tax on estates over $10 million to bolster Social Security and Medicare -- two positions that any progressive liberal would support. Today he's against universal health care (at least as enacted by President Obama) and opposes gay marriage, gun control, and abortion.

Bottom line: Put up or shut up time for Trump may now be at hand. Trump reportedly claims to be holding off on a renewal with NBC for his TV show, and driving up his ratings with his pretend-presidential bid may be his way to gain the upper hand in any talks.

But if the strategy doesn't work, and NBC doesn't give him the deal he wants, his bluff will be called. Then he'll have no choice but to declare his candidacy and file a full financial disclosure statement, which is required of all candidates -- a document that could wind up making him the laughingstock of the nation, and at a minimum would have hundreds of reporters combing through it, line by line, for months and even years on end to find out just how much Mister Big Stuff is really worth.

My bet is that, faced with all that, he'll finally take the Rosie Ruiz escape hatch and stop pretending to run in marathons he knows he can't win.

The opinions expressed in this commentary are solely those of Christopher Byron.