By Christopher Santora, Special to CNN 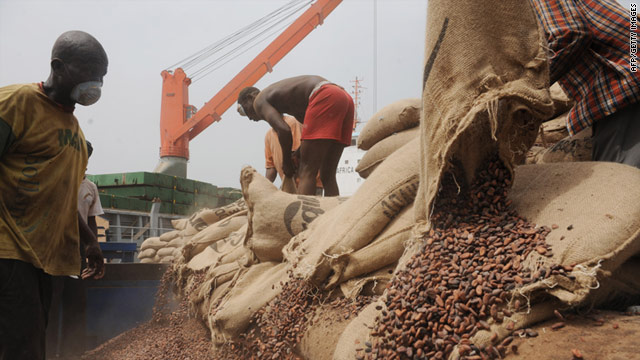 Ivorian workers empty bags of cocoa beans into a container at the Port of Abidjan.
STORY HIGHLIGHTS

Editor's note: Christopher Santora worked as a trial attorney in The Hague for the prosecutor for the Special Court for Sierra Leone in the case against the former Liberian President Charles Taylor. He also worked in Freetown, Sierra Leone, as a prosecutor in cases involving armed factions in that country's 11-year conflict.

(CNN) -- The capture of Laurent Gbagbo, whose refusal to concede the presidency of the Ivory Coast to challenger Alassane Ouattara despite his internationally recognized election loss nearly five months ago, is being accompanied by calls for him and his associates to face justice. But it is unclear what form this justice will take.

Gbagbo's capture by U.N. peacekeeping troops could be the final act in the post-Cold War drama in West Africa. Since 1989 in Liberia, inter-related conflicts have raged in all Liberia's neighboring countries -- including Sierra Leone, Guinea and most recently, Ivory Coast. Each conflict had its own peculiarities and dynamics, but in all of them, commercial interests profited from and contributed to the wide-scale misery of the civilian populations.

Whether it was timber and rubber in Liberia, diamonds in Sierra Leone, bauxite in Guinea or cocoa in the Ivory Coast, outside commercial interests, engaging with ruling governments or rebel factions, have been complicit in the theft of natural resources. In many instances, these companies could be liable under a variety of aiding and abetting or conspiracy theories of criminal law.

A proverb has been recently coined in West Africa: "Reconciliation without justice is like a man winking to a woman in the dark." After years of impunity for the worst abusers in the region, recent efforts in Sierra Leone, including the trial of the former Liberian President Charles Taylor, have been at least a small step toward justice for victims. But noticeably absent from any form of accountability throughout all these conflicts, whether in the International Criminal Court in The Hague or domestically, have been the profiteers.

In the case of Ivory Coast, it might finally be possible to change this. President-elect Ouattara has expressed the right sentiment recently, saying there can be no reconciliation without justice, and indicated he plans prosecutions at the international and national level, for all sides. He said he would ask the International Criminal Court to investigate massacres that members of Gbagbo's forces, and even his own, were suspected of carrying out.

He has also talked about plans for a "Truth and Reconciliation" committee responsible for "shedding light on all the massacres, crimes, and all cases of human rights violations."

Gbagbo stepdaughter: Fight not over

Ouattara's focus on all factions is encouraging, especially in light of the ethnic divisions that have been aggravated by the conflict. But it is not enough. Rather, true accountability must include the outsiders who played a vital role in sustaining and promoting the Ivorian conflict through the cocoa trade.

Both the United Nations and NGOs such as the London-based Global Witness have documented the role that segments of the country's cocoa sector have played in funding and in profiting from the nearly decade-long war. In a 2007 report, Global Witness documented how the cocoa industry, including subsidiaries of major international corporations, provided money for Gbagbo to purchase arms. The report connected this to some of his regime's worst human rights abuses. This was despite the imposition of a United Nations arms embargo on Ivory Coast as part of the U.N.'s effort to foster reconciliation and a unity government.

It is an indisputable fact that the conflicts in Africa over the last 30 years have been characterized by an inordinate amount of suffering by civilians. When efforts at justice focus only on African leaders and their immediate subordinates,while ignoring the international commercial actors, there is a true double standard.

Post-conflict justice and reconstruction efforts in Ivory Coast offer a chance to rectify this omission. During the course of the war, the value of cocoa amounted to about $1.4 billion a year. It is simply unjustifiable that Ivorians should pick up the full tab for the reconstruction of the country whose primary export enriched so many while the country fell apart.

Any proposed reconstruction plan for the Ivory Coast should include a concerted effort to assist the new Ivorian government in conducting impartial, independent, well-resourced investigations and trials that focus on these economic actors. This should include investigations into certain multinational coca exporters and actions for reparations where feasible. It should include the new government taking steps to initiate judicial actions in Europe and the United States, where feasible, for civil and criminal claims of pillage.

For the Ivory Coast's future, the cocoa trade is critical. Taking steps now to initiate some accountability for involved companies would encourage future transparency and help curb trade that facilitates conflict. But most important, it will provide a comprehensive form of justice for all those complicit in some of the worst crimes of our time.

The opinions expressed in this commentary are solely those of Christopher Santora.