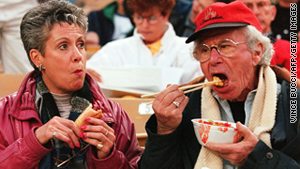 Food seems to be an essential part of any trip to the ball game in America.

(CNN) -- When the woman in the red Texas Rangers shirt caught the home run ball on Tuesday and tried to hurl it back, only to throw it so tamely it didn't even clear the stand, everyone around her smiled and laughed. Why?

Texas had just conceded a home run. In fact the team was on its way to a 15-4 humiliation by the Los Angeles Angels. For the fans up in the stands, surely that should not have been a laughing matter?

As an ex-pat Brit who has lived in the U.S. for the best part of three years and who has been watching U.S. professional sports a lot longer than that, it's striking to see what constitutes a "fan" here.

It's a common conversation when my compatriots visit the U.S. and go to a game -- MLB, NFL, NBA, NHL, whichever acronym you want. Brilliant experience, they say. Great entertainment. Superb stadiums and arenas. Comfortable seats, loads of room. Plenty of food and drink. And the restrooms aren't overflowing with urine. But the fans -- well, they don't care much, do they? Arriving late, leaving early, holding casual conversations during play, what's all that about?

It's a sweeping generalization, I know, but from what I've seen, most fans are there to have a good day out. If their team wins, great, but if they lose, that need not ruin the occasion.

Turning on my car radio last week, here was the call from the sports call-in show. Tell us what gets you fired up about being a sports fan in the spring? Back came the answers -- the start of the baseball season, NBA play-offs, the Stanley Cup. The fans are passionate, they said. Really?

My local team, the Atlanta Hawks, are playing Orlando in the NBA playoffs, just like last year. This is what they've been fighting for during the best part of six months. This is it, do or die. Last year's home opener was a 19,000 sellout. Unrestrained excitement, right? Right?

So why come tip-off time were there gaping holes in the crowd, blocks of empty seats, while in the concourse, fans formed lines for beers, Cokes and nachos. With processed cheese? Why weren't they in their seats supporting the team?

Watching U.S. professional sports is indeed wonderfully entertaining. It's a very polished show where the game is only half the fun. When the TV director cuts to crowd shots, fans are smiling, happy, waving. Even if their team is getting crushed. They cheer the mascot race, they embrace for the kiss-cam.

And that's just it. I've been brought up on English soccer/football (I'm not having that debate today) where being a fan is an intense, obsessive and often anti-social experience.

It's not meant to be fun, it's not meant to be entertaining. It's serious. So serious that the Italians even have two words for "fan," distinguishing the regular foot soldiers from the super-dedicated, vocal and sadly occasionally aggressive "ultras."

So serious that 60% of European fans said the game was like a religion to them, according to the UK's Social Issues Research Centre (SIRC).

Being a fan means experiencing extreme emotions from heart-pounding ecstasy to utter despair.

At the end of the English soccer season, the three teams at the bottom of the standings get pushed down to a lower division. Their fate often comes down to the last game. The TV cameras scan faces in the crowd, but here you see no casual relaxed smiles, cheery waves and flirtatious kisses. Instead you see torment, fans with their heads in their hands, faces contorted with tension and worry. And yes, there will be tears.

More than 70% of British fans have cried at some stage during a game, according to SIRC's 2008 study.

I had no choice who I supported. I was born in Derby, and so Derby County was and is my team, like my parents and my grandparents. They're not even in the top-flight Premier League. Tough. You can't go changing. I have them for life.

When I took my American wife, Jill, to her first game, Derby conceded two goals in the fist 20 minutes. It was the opening game of what was clearly going to be an arduous season.

Grumbles soon became profanities. Then one man a couple of rows down snapped. He'd waited all summer for the new season and all his expectation and hope had been shattered within minutes. It was too much for him. Angrily, he stalked down to the front of the stand, hurled his season ticket towards the field and left. You see he really cared, at that particular moment in time, nothing was more important in his life. And I have little doubt the next day he would have contacted the club to get his tickets back, thinking: "Well, maybe it'll be better next week."

I don't see that passion at games in the U.S. How can you focus on being a fan when the game keeps stopping, the music starts and you have to spend the next three minutes watching a guy in a big furry bird costume perform a dance routine? Why do you need grinning cheerleaders to generate noise?

Why the difference then? Sociologists and academics have stayed gainfully employed analyzing the psyche of soccer fans in Europe.

The reason? It's certainly not success. In England, unless you support one of four or five teams, you are highly unlikely to celebrate any trophies.

"The natural state of the football fan is bitter disappointment," wrote Nick Hornby in his seminal book "Fever Pitch" (yes, it was a soccer book and a Colin Firth movie before being adapted for the Boston Red Sox).

Nor is it about being entertained. For most soccer fans, watching games is not enjoyable. If you're losing, it's miserable. And if you're winning, you are conscious of the times you've watched your team screw up right at the end so you spend most of the time willing the clock to turn faster.

Is it the booze? Nope. More alcohol is consumed during games in America than in English soccer stadiums where you can't take a drink to your seat. I've seen plenty of drunk fans here at baseball, football and basketball games.

Instead, the role of a fan is focused and simple in Europe. You turn up to watch the game, support your team and that's it. No dancing girls, no corporate-sponsored mascot races. It's all about the result, and it makes or breaks the weekend. I've been to games where I've been delighted with a dour 0-0 tie when we were expected to get beaten. I've heard of men who were dumped by their girlfriends but said: "I'm OK, we won 2-1."

Being a fan is being a member of a clique, not always a fashionable or desirable one, but a clique nonetheless. Home and away fans are separated in different parts of the stadium. Even if they removed the barriers, I expect fans would still segregate themselves. Attending away games being taunted by the locals for an hour and a half accentuates the feeling of belonging to a tribe. And the tribe unites in song. These can be celebratory, funny, obscene, confrontational and slanderous.

Also, many teams have been around for 130 years or more and allegiance can help define who you are. Usually it's about regional identity. In extreme cases, it underscores your politics, like with St. Pauli from Hamburg.

In Europe, soccer dominates everything. Sure there is rugby, cricket for some, but for mass spectator sports, it's only soccer. The obsession spreads across national boundaries, nurtured for decades.

Is it silly to get emotionally involved about a team of 20-somethings running around after a ball in shorts? Of course, but since when was being a fan about logic?

America, on the other hand, is a land of choice, and sports fans are spoiled. And the American sporting mentality, although extremely competitive, has generated a calmer perspective for spectators.

That's all very healthy. But please try not to smile next time your team slumps to defeat, at least not while the cameras are on you.