McJobs an empty-calorie fix for unemployment

By Annette Bernhardt, Special to CNN 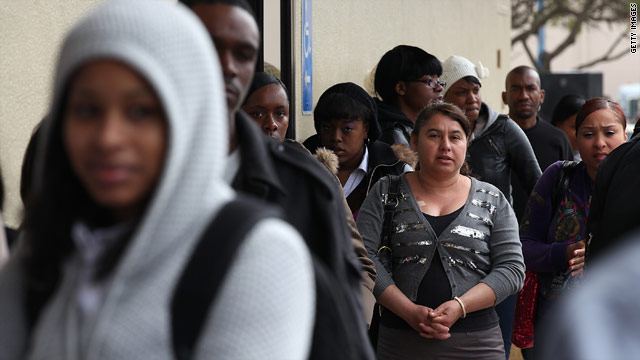 Job seekers wait in line at a one-day hiring event April 19 at a McDonald's in San Francisco. Hundreds showed up to apply.
STORY HIGHLIGHTS

Editor's note: Annette Bernhardt is policy co-director of the National Employment Law Project, a national advocacy group for the rights of lower-wage earners. She was lead researcher on NELP's recent report, "A Year of Unbalanced Growth: Industries, Wages, and the First 12 Months of Job Growth After the Great Recession."

(CNN) -- We are starved for signs that the economy is picking up. So when McDonald's threw its doors open to hire 50,000 workers nationwide, media networks scrambled to film applicants lining up across the country for that increasingly elusive piece of the American dream -- a job.

The hirings were billed as a boost to the economy, and for a fraction of the country's 13.5 million unemployed, landing one of these jobs will be a huge and welcome relief.

But let's step back from the McDonald's public relations bonanza for a minute and recognize that nothing is great about low-wage jobs, even when they flood the economy by the thousands. Low-wage jobs subject families to unrelenting economic stress. They trap workers in dead-end careers, denying them the money and time to invest in education and new skills. And they rob local communities of middle-class incomes and stable households.

Yes, a bad job may be better than no job at all. But it is farcical at best, and dishonest at worst, to dress up low-wage jobs as growth drivers or as beneficial, over the long run, to those who hold them. When there is this much excitement over hiring thousands of people into part-time jobs that pay poverty-level wages, something isn't right.

If lower-wage jobs continue to be America's growth model going forward -- and so far in our recovery they largely have been -- anyone who cares about the future of the middle class and the strength of our economy should be very worried. Right now, America is filling up on empty calories.

As the National Employment Law Project recently documented, the economy added more than 1 million private-sector jobs last year, but most of them came from mid- and lower-wage industries, like temp jobs, restaurants and retail. Higher-wage industries such as construction or financial services constituted 40% of job loss during the recession, but have contributed only 14% of job growth as of February. So not only are workers encountering few job opportunities, they are seeing fewer well-paying jobs than before the recession.

Sure, McDonald's points out that half of the company's franchise owners started in entry-level jobs and that some rise to become managers. But the math doesn't bode well: There are about 650,000 McDonald's workers in the U.S., but only about 13,000 franchises.

That means most employees will be waiting till eternity to get the chance to become an owner. The reality is that 88% of the fast-food industry is made up of front-line jobs -- food preparation and serving occupations -- with a median wage of $8.83 an hour. There simply aren't enough managerial slots to offer all those workers the opportunity to move up and build a career.

Let's step back from the McDonald's public relations bonanza and recognize nothing is great about low-wage jobs.
--Annette Bernhardt
RELATED TOPICS

Some argue that McJobs are really meant for less educated workers, who basically shouldn't expect to earn much more than fast food (or retail or temp job) wages.

Putting aside that many highly educated workers are now taking fast-food jobs just to survive, more than 70% of Americans lack a four-year college degree. Surely the millions of skilled, creative and hard-working Americans without college degrees should not be consigned to a lifetime of $8.83 an hour.

Another common (and worn out) argument is that low-wage workers are casual part-timers or teenagers just looking for extra cash. But more than 80% of low-wage workers are adults, and many are breadwinners in their households and supporting children or other dependents. What's more, unprecedented numbers of older Americans are staying in the labor force after their retirement savings were decimated by the financial and housing crashes. These days, even grandmothers need a living wage.

As grateful as McDonald's new hires surely are for the work, we have to create better jobs. The country is facing high unemployment, declining family incomes, skyrocketing CEO pay, shrinking health benefits and waves of foreclosures and bankruptcies.

States across the country are trying to eliminate labor protections that working men and women have relied on for generations. Corporations are sitting on record profits but are not doing enough hiring, squeezing what they can out of their current employees. And when they do hire, they know many jobless workers will be desperate for any job, no matter the quality or pay.

It's an unsustainable path. Allowing our economic recovery to be fueled by low-wage job growth will undermine any chance we have of building a 21st century economy based on strong and competitive industries that support working families. America has created a thriving economy before, coming out of an even deeper recession; it is time we do it again, by putting living wages squarely on the job creation agenda.

The opinions expressed in this commentary are solely those of Annette Bernhardt.