By Peter Gadiel, Special to CNN 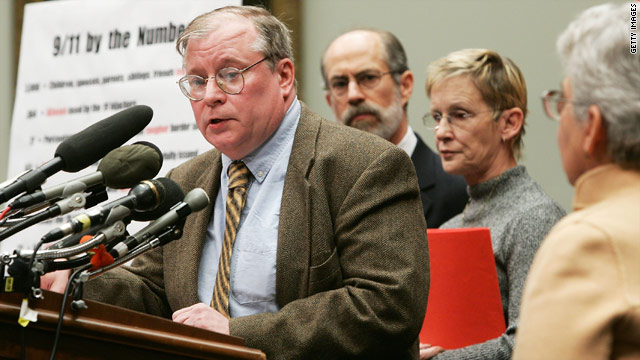 Peter Gadiel speaks to the media for 9/11 Families for a Secure America in 2004. His son died in the terror attacks.
STORY HIGHLIGHTS

Editor's note: Peter Gadiel is the president of 9/11 Families for a Secure America.

(CNN) -- As the father of a 23-year-old son murdered by Osama bin Laden's suicide killers on September 11, I understand the joy expressed by so many Americans today on the death of this monster. But my thoughts dwell more on my son, James, and the thousands of bin Laden's victims; not just the dead of 9/11 but soldiers killed during the wars in Iraq and Afghanistan, the Cole attacks, the embassy bombings, Mumbai, and on and on.

So although I don't disapprove of the patriotism and happiness expressed around the nation in the past day, I can't say that I feel the desire to participate in the celebration. Bin Laden's death won't bring James back.

The word "closure" is often used at a time like this, when talking about the loss of a family member, and I suppose that is the way for sympathetic people to show their concern. They are expressing their hope that the victims' families will somehow reach a condition where the pain is lessened by the passage of time.

For me, that pain is as strong as ever. There is never "closure."

Jamie worked for Cantor Fitzgerald, and it was his first job out of college. He had worked there for about six months. He had been a presidential scholar and attended Washington and Lee University. He worked on the 103rd floor.

Beyond that, it is useless to try to describe my son. Just as words can never express my loss, they are equally useless to try to show those who didn't know him how special he was. It is enough to say that he was a gentleman and a gentle man.

I know that I speak for other 9/11 family members when I say that we are in a different place from those who experienced terrorism as attacks on their nation rather than as attacks on themselves.

I also know that I am expressing an almost universally held view among the families that our government failed us on 9/11. Although some, probably a very few, are convinced that the Bush administration "knew" in advance of the time, place and method of the 9/11 attacks, they are the tiniest and most irrational minority. The rest of us know that widespread incompetence and corruption among those officials were the cause.

Yet, no federal official has been held to account. Not one from the Clinton administration. Not one of the Bush administration officials who ignored the Gore Commission's recommendations for improved airline security, nor anyone from the State Department whose officials, in violation of law, regulation and common sense, issued visas for the asking to the 9/11 terrorists.

So, no, I can't celebrate the death of bin Laden. Too many Americans, who were paid to protect this country but failed to, have skated free of blame.

When they are called to account, and when proper measures have been taken to protect us from future attacks, then I will celebrate.