Spreading terror: From bin Laden to Facebook in Southeast Asia

From Maria Ressa, Special to CNN 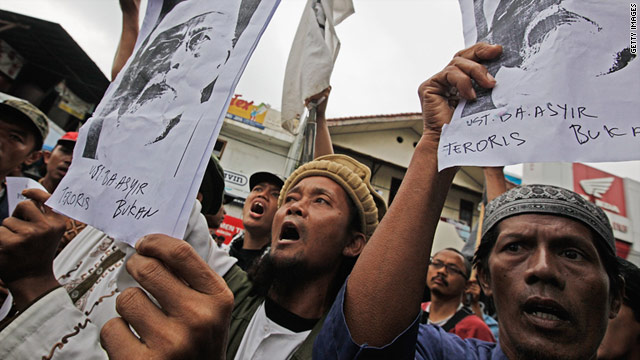 Supporters of radical cleric Abu Bakar Bashir, who is currently on trial in Jakarta on terrorism charges.
STORY HIGHLIGHTS

Editor's note: Maria Ressa is CNN's former Jakarta bureau chief and author of "Seeds of Terror: An Eyewitness Account of Al-Qaeda's Newest Center of Operations in Southeast Asia." She worked as a journalist in Southeast Asia for nearly 25 years and is the Author-in-Residence at the International Center for Political Violence & Terrorism Research in Singapore.

(CNN) -- Osama bin Laden's death is a moral victory, but it may turn out to be nothing more than that.

Over the past decade, he has been isolated and the capabilities of al Qaeda degraded, but it's evolved into a social movement that continues to attract new groups and new recruits.

Studies of social networks of al Qaeda and its Southeast Asian arm, Jemaah Islamiyah (JI), show they continue to spread violent jihadi ideology like a virus.

Aside from the crucible of the Afghan training camps in the late 1980s, the constant propaganda pumped out by al Qaeda's media arm and the real and perceived injustice against Muslims used by radicals to recruit moderates, there are other, more imperceptible influences.

More people are buying into the ideology of JI and its associated groups.
--Rohan Gunaratna, author 'Inside al Qaeda'

If these can spread through social networks, why not the volatile mix that leads to terrorism -- anger, fear, hatred, religious fervor? Mapping the social networks of al Qaeda and JI show it does.

Both al Qaeda and JI operated the same way. They hijacked disparate groups, trained and funded them and infected them with the jihadi virus that targeted both their governments and the U.S.

Both groups used a top-down centralized command as well as bottom-up initiative to spread the ideology and carry out attacks. Their zeal came from a blood compact -- an evolving network of family and friends.

After 9/11 triggered a fierce reaction from law enforcement agencies around the world, both al Qaeda and JI were affected the same way: their centralized command structures collapsed and their operational capabilities were degraded.

In Southeast Asia, the possibility of retaliatory attacks from bin Laden's death may be highest in Indonesia, the country with the world's largest Muslim population. Since mid-March, a series of attacks and foiled plots show the JI network still at work.

The jihadi virus is spreading into more moderate and mainstream communities.

What is next for al Qaeda?

'I hope it is their names we speak'
RELATED TOPICS

"The organizational structure of these terrorists," says Ansyaad M'bai, the chief of Indonesia's National Counter-Terrorism Agency (BNPT), "originally formed from the core members of JI, which broke into smaller units. This can be seen through the nature of bombs, the style of assembly of the explosives they use. This is the same group."

Nearly ten years after 9/11, the link between JI and al Qaeda continues. In January, Pakistani police arrested JI leader Umar Patek (who had operated in the Philippines since 2003) and his Filipino wife. They were arrested after police trailed a known al Qaeda operative.

"This is a clear indication of the continuing partnership between al Qaeda and JI."

The internet and mobile phone technology have helped to further decentralize terror networks and spread the jihadi virus. More jihadi content is spreading faster in the virtual world while police are finding online technical manuals on bomb-making in real-world terrorist safe-houses.

"More people are buying into the ideology of JI and its associated groups," says Gunaratna.

"More individuals are politicized, radicalized and mobilized, and a very small number of them will continue to carry out attacks."

Add to this mix the potent amplifying effect of social media. In mid-April, a jihadist prepared a 23-page guide to "effectively post" on Facebook. (Indonesia is the second largest Facebook-using nation in the world; the Philippines ranks sixth globally).

What seems clear is that in both the virtual and real worlds, the jihadi virus is spreading from al Qaeda and associated groups into more moderate and mainstream communities.

Which brings us back to where we started: Osama bin Laden is dead, but the jihadi virus is here to stay. The question now is how to track its mutations and vaccinate the public against it.