By Rachel Ehrenfeld, Special to CNN 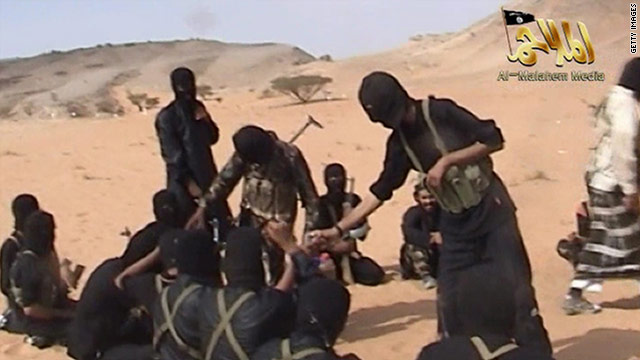 A screen shot of a video posted on the Internet on October 6 shows militants from al Qaeda in the Arabian Peninsula.
STORY HIGHLIGHTS

Editor's note: Rachel Ehrenfeld is a terror finance scholar and author of "Funding Evil." She is director of the American Center for Democracy, a nonprofit organization that monitors global and domestic free speech issues. Her initiative led to the passage of "Rachel's Law " in New York state and the federal SPEECH act, which protects American writers and publishers from the enforcement of foreign libel judgments.

(CNN) -- Al Qaeda Inc. might suffer some initial setbacks from Osama bin Laden's death, but so did Apple Inc. when shares dropped over rumors of Steve Jobs' illness. But it did not take long to realize that Jobs has established a highly functional corporation, and the shares bounced back.

The same can be expected for al Qaeda Inc. The jihadist organization has changed since its establishment in Afghanistan in 1988 by bin Laden and Palestinian sheikh Abdallah Yusuf Azzam. Al Qaeda Central has developed several branches and inspired many other radical Islamic organizations, each with its own independent resources.

Most rely heavily on a variety of illegal activities, ranging from drug trafficking to kidnapping for ransom, often in association with international criminal syndicates.

The al Qaeda in the Islamic Maghreb terrorist group, for example, has sustained itself since 2003 primarily on revenues derived from the business of hostage taking, mostly Westerners. It also engages in drug trafficking and receives some donations.

The Maghreb group's kidnap-for-ransom business, especially in North Africa, generates many millions of dollars. The problem has become so prevalent that in September, Britain's Foreign Secretary William Hague called on the U.N. Security Council to urgently "act to prevent" the practice of "kidnap ransoms." The U.N. Security Council expressed its concern, reminding member states to prevent terrorist financing, but did not address the payment of ransom for kidnapping.

The illegal drug business, mostly Afghan heroin, has been a bountiful financial resource for the Taliban, al Qaeda and its affiliates in Pakistan, Central Asia, Africa and Latin America.

What is next for al Qaeda?

'I hope it is their names we speak'
RELATED TOPICS

In January 2010, a Drug Enforcement Administration official revealed that al Qaeda groups in West Africa were charging protection fees from cocaine drug-trafficking groups affiliated with the Revolutionary Armed Forces of Colombia (FARC). West African countries and criminal organizations have been used for years by the Colombians to transfer drugs to Europe. Al Qaeda involvement with drug trafficking organizations in South America has been documented since the early 1990s. More recently, terrorist group operatives have been linked to Mexican drug cartels, providing the terrorists easy access to the U.S.

Then there are the Saudis, who funded al Qaeda from the beginning. WikiLeaks reported November 28 that a cable from the State Department in December 2009 complained that Saudi donors remain the primary financiers of Sunni militant groups like al Qaeda. The cable confirmed that very little has changed since former Undersecretary of the Treasury for Financial and Terrorism Intelligence Stuart Levey's testimony before Congress in 2006. "On terrorist financing ... there has been a real lag between what (the Saudis) say they were going to do and what they do," he said.

Pakistani police reported in 2009 that Saudi Arabia's charities continue to fund al Qaeda, the Taliban and Pakistan's Lashkar-e-Tayyiba. The report said the Saudis gave $15 million to jihadists, including those responsible for suicide attacks in Pakistan and the death of former Pakistani Prime Minister Benazir Bhutto.

In May 2010, Buratha News Agency, an independent news source in Iraq, reported on a leaked Saudi intelligence document showing continued Saudi governmental support for al Qaeda in Iraq in the form of cash and weapons.

In 2009, Levey told the Senate Banking Committee about concerns over "deep-pocket donors" and the abuse of charities to fund militants.

"Is money leaving Saudi Arabia to fund terrorism abroad? Yes," he was quoted as saying. "Undoubtedly, some of that money is going to Iraq. And it's going to Southeast Asia, and it's going to any other place where there are terrorists."

An article in the May 31, 2010, edition of The Sunday Times in London revealed that the Afghan financial intelligence unit, FinTRACA, reported that since 2006, at least $1.5 billion from Saudi Arabia was smuggled into Afghanistan, headed most probably to the Taliban. However, a portion of the money was withheld by al Qaeda on its way to Afghanistan through Pakistani tribal areas, especially through North Waziristan, known as "al Qaeda's heartland."

On April 25, a WikiLeak report revealed that a corrupt Afghan official who ended up in Guantanamo transferred British funds for opium eradication in Afghanistan to al Qaeda. Rising opium and heroin prices and increased production in Afghanistan, combined with corrupted Afghan officials, all but guarantees that drug revenues, as well as coalition aid and development funds, will end up with al Qaeda.

To stop the funding of al Qaeda, the Taliban, radical Islamic organizations and other terrorist groups, it's time for the U.S. government to publicly identify and list everyone -- individuals, organizations and states -- engaged in funding terrorism directly and indirectly, including those who finance the spread of radical Islam. They should also be designated as terrorists, prosecuted whenever possible, and their assets should be frozen.

On the drug front: The U.S. government has the means to severely curtail the cultivation of opium poppy, the coca bush and cannabis. The U.S. must complete research on mycoherbicides, specialized bioherbicide agents designed to inoculate the soil against the growth of certain plants, ensuring that the targeted plants cannot be cultivated. In Afghanistan, we must subsidize the cultivation of alternative crops to the poppy.

Bin Laden is dead, but his jihadist disciples are alive, ready to avenge his death. Those who funded him and other radical Islamic groups have not changed either. While bin Laden's death is likely to affect al Qaeda Central, it did nothing to quench the radical Islamic mission to fight for the establishment of Islamic supremacy.

The opinions in this commentary are solely those of Rachel Ehrenfeld.