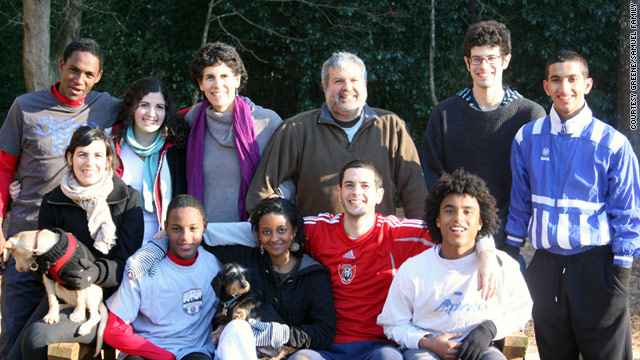 Editor's note: Melissa Fay Greene's book, "Last Man Out," about the 1958 Springhill Mine Disaster, was published by Harcourt in 2002. Greene's other award-winning books include "Praying for Sheetrock," "The Temple Bombing," and "There Is No Me Without You." Her new book, "No Biking in the House Without a Helmet," will be published in spring 2011.

Atlanta, Georgia (CNN) -- The very words "majority" and "minority" in American demographics are about to swap meanings, like partners on opposing sides of a Virginia reel who lock arms in the middle, whirl about, and take up positions on opposite sides of the lineup.

A few weeks ago, the U.S. Census Bureau revealed dramatic news: America's ethnic minorities, including immigrants, are rising in number, while its traditional white majority is aging and failing to reproduce at replacement levels.

Arizona leads the trend: 83% of Arizona's senior citizens identify as "non-Hispanic white," but only 42% of its young people check that box on their census forms. Policy-makers note a "cultural generation gap," and wonder whether "aging whites" will remain committed to paying taxes for the public schools as they fill with children of color, and whether a diverse and foreign-born generation of young adults will be eager to care for and fund programs for those aging whites.

All this talk of aging whites (unspoken adjective: "cranky") and of "minority youth" (implication: headphones, fitted baseball caps and platinum teeth-grilles) inspires in my husband and me a feeling of: "Been there, done that."

The cultural generation gap hits between the 17- and the 18-year-olds. Of the generation of persons 13 to 17 years of age (our "adopted children"), 100% are "foreign-born minority:" one a brown-skinned Romani boy from Bulgaria and three boys and one girl from Ethiopia.

What these changes have meant for us socially, politically, economically, culturally and in conversations regarding the importance of zirconium stud earrings for teenage males, and whether or not every pizza has to be plastered with jalapeño peppers, has important implications for Americans.

Who isn't concerned about which sports broadcasts will dominate evening television viewing in 21st-century American households: L.A. Dodgers vs. Atlanta Braves, or Manchester United vs. Tottenham? What aging white wouldn't prefer to be greeted by a nice plate of macaroni and cheese for dinner, and cookies for dessert, rather than a suspicious looking array of injera and wat, served in a colorful basket and requiring no silverware, with raw slices of un-American fruits like "mango" on the side?

Just this morning I turned on my car in the driveway (the car I lent to a 17-year-old African-born youth last night so he could drive with other African-born youths to a Korean take-out chicken place called Mo Betta Wings) and an X-rated hip-hop song blasted with such explosive force from the radio that, for a second, I thought I'd been in an accident.

Can such an incident be good for the heart of an aging white?

I turned down the volume, tuned in to our local NPR-affiliate station, and cruised through Atlanta's shady streets to the rousing call of Mendelssohn's Italian Symphony. But in the afternoon, after I picked up my children from their schools, my radio dial was yanked counter-clockwise back to the hip-hop station; the volume dial was wrenched clockwise to the setting "Deafening;" the bass woofers shook my Honda Pilot and bounced off the exteriors of nearby vehicles; and we lurched and shimmied our way home.

I began to subtly twist in my seat to the steady rumbling beat. As we passed people on the sidewalk whom I knew slightly, I thought about shouting "Yo!" at them, or "Whassup?" But I refrained. I have learned that minority youth do not like to see their aging whites behave like that.

And the teenagers have learned that a radio rapper's hoarse bellowing -- out all four windows and up through the sunroof -- of certain words starting with F, N, B, or W/H are unacceptable to the aging white female behind the wheel. They have learned that I will not entertain theories that begin: "Mom, they don't mean nothing by it."

They know I will reply: "Anything. They don't mean anything by it. But they do. It's misogynistic." After which it's back to Mendelssohn for all.

At Burlington Coat Factory, "minority youth" enjoy selecting urban-style clothing from designers like SeanJean, Ecko, Baby Phat, Rocawear and LRG. A handsome, athletic middle-schooler named Yosef exits the dressing room in a new pair of jeans for Mother's approval. Mother helpfully points out that, while Yosef's waist is a medium, the waist of these jeans appears to be size XXXL. The waistband cuts across Yosef's thighs. He must hold up the jeans with one hand in order to avoid tripping over them on his way to the mirror.

Yosef, Mother learns, wants to have "swag" or fashion-sense. "Fit" is about as relevant a concept as "bargain" or "affordable."

Historically, when non-Hispanic white children were the majority in our family, clothes were handed down from older siblings to younger. This occurred for one reason: The older children outgrew the clothing.

In this era of demographic transition, however, clothes are handed up from younger siblings to older. This happens for two reasons: first, a few of the foreign-born younger children are growing to impressive heights. As Daniel, 16, and Yosef, 13, outgrow their jeans and sneakers, they hand them up to Lee, 23, and Seth, 26. Second, the younger children's stylishly gigantic clothing is suitable for young adult siblings who prefer snugger fits. "My favorite basketball shorts," says Lee, "belonged to Yosef when he was 10."

Democracy has been a remarkable discovery for children coming from worlds of social marginalization or of repressive regimes. Yosef and Daniel arrived from Ethiopia at ages 10 and 13 in June 2007, four months after the U.S. senator from Illinois announced his candidacy for the presidency of the United States. But I couldn't seem to interest Daniel in Sen. Obama's campaign or anyone else's. In Daniel's experience, presidential campaigns tended to end in gunfire.

"Look, Daniel!" I called to him one evening, pointing out Barack Obama in the row of podiums at a candidates' debate. "He could be the first black American president!"

"Where, Mom?" barked the gangly fellow.

"There, Daniel, right there," I said, gesturing again toward the senator.

"Where, Mom?" he repeated, with the Ethiopian roll of the R.

I walked to the TV and put my finger on Obama's head. "Daniel, right there. This man."

In Daniel's experience, presidential campaigns tend to involve black candidates. But this didn't look like one of them. "No, Mom," he said sadly. "Not black, Mom. He not black."

In time, though, Daniel was swept up in the family's and the neighborhood's and the city's enthusiasm. But his memory of stolen elections haunted him. "Mom," he said one night. "Do you think they will let Obama win?"

Conversations about schoolwork take on new zest when, rather than a specific work of literature or history, you are wrestling with the English language itself, sometimes pinned down by an immigrant youth, and sometimes throwing and clobbering the youth instead.

"Mom! Body all now I can. All. Ask!" Daniel ordered me enthusiastically in the car one afternoon as I drove him to soccer practice. He was then 13 and had lived in America for two months. He'd arrived from Ethiopia without a word of English. I guessed that he was relaying good news from his English as a Second Language class, but the precise nature of his good news eluded me. I thought he was saying, Body oil now I can. Oil. Ask.

"All," he repeated. "Teacher say: One hundred!"

"One hundred!" I marveled.

He touched my shoulder and asked: "This one?"

I pointed to my chin.

I outlined my lips.

I held up my thumb.

I burst out laughing.

I loved talking to Daniel about school. With or without oil.

School. The right to go to school; the right to be welcomed and seated among one's peers, addressed kindly by teachers, given books to read and to take home, holds a great allure for children from countries so poor that education is a luxury for the few.

Most of our younger children had been too poor to attend school in their home countries. Several arrived here, at older ages, illiterate. They take school seriously, as a privilege more than as an obligation.

I attended a parent-teacher meeting one afternoon at Shamrock Middle School when Sol was a sixth-grader. "This class has become very, very unruly," his Social Studies teacher began. "Many of the children are loud and disrespectful." I braced myself for bad news, while thinking how surprised I'd be by bad news as Sol invariably rose at 5 a.m. and dressed neatly to be ready for school every day.

She continued: "One day last week, I told the class: 'I am going to go sit at the table under the windows. If anyone here actually wants to learn Social Studies, you can join me.' I took my things and moved to the far table. The children were surprised, but no one moved. .. except Sol. He picked up his backpack and came to sit across from me. He got out his notebook and pencil." The teacher's eyes filled with tears as she said, "I taught him the lesson."

Later, the teacher continued, when class was dismissed, one of the tough guys in class growled at Sol: "Don't you ever do anything wrong?" and Sol, a handsome and highly skilled athlete, shrugged and said, "Why should I?"

To all Arizonans and future Arizonans, I say: Be not afraid! Let glorious diverse youth -- both native-born and immigrant -- grow up and thrive in America. Let them share with older white Americans their hip-hop fashions and poetry, sports and music, art and cuisine, love of democracy and desire for education, ambitions and dreams.

My husband, children and I have seen the future and it is spicy, boisterous, fashionable, smart, funny, loud, democratic, wise-cracking and sweet; in short: It is American.

The opinions expressed in this commentary are solely those of Melissa Fay Greene.