By Michael Honda, Special to CNN 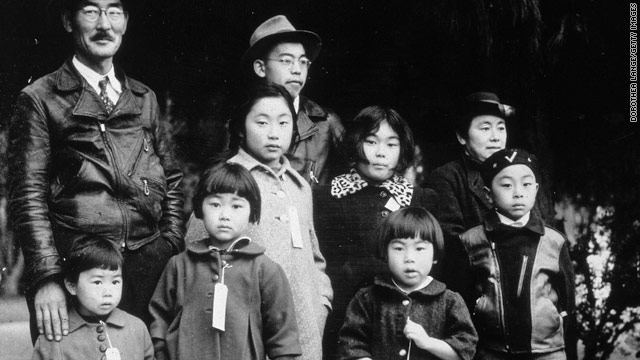 The Japanese-American Mochida family await relocation to a an internment camp in this photo taken by Dorothea Lange.
STORY HIGHLIGHTS
RELATED TOPICS

(CNN) -- Who would have thought that my early childhood experience in a Japanese-American internment camp during World War II would offer such useful insight, 65 years later, in determining the direction America is headed? In reflecting on this week's second round of Muslim radicalization hearings, planned by New York Rep. Peter King, I feel as if a mirror is being held up to my life, giving value to lessons learned as a child.

We know all this, and yet our country is now, within my lifetime, repeating the same mistakes from our past. The interned 4-year-old in me is crying out for a course correction so that we do not do to others what we did unjustly to countless Japanese-Americans. 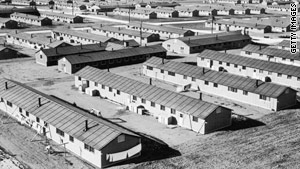 Camp Amache, Colorado, where Rep. Honda and his family were sent.

This time, instead of creating an ethnic enemy, Rep. King is creating a religious enemy. Because of prejudice, war hysteria and a failure of Republican leadership, King is targeting the entire Muslim-American community. Similar to my experience, they are become increasingly marginalized and isolated by our policies.

Michael Honda on the day his family was released.

Second, it is counterproductive. King is undermining his own objective. In hosting these hearings, King, as chair of the House Homeland Security Committee, has declared, erroneously, that the Muslim-American community does not partner actively enough to prevent acts of violence -- or in the case of prisons, extremism. Despite the offensive and fallacious nature of King's concern, given extensive evidence that contradicts his claim, the Homeland Security chairman's strategy makes future partnerships unpalatable.

In one fell swoop of his discriminatory brush, King, in his apparent attempt to root out radicalization, marginalizes an entire American minority group, making enemies of them all. To add insult to injury, King has quipped (again, speciously) that America has too many mosques and that extremists run 80 percent of them. We can only hope that Rep. King does not completely undermine all the goodwill established across this country between Muslim Americans and law enforcement officials. You can be certain that few will want to work with King going forward.

Don't get me wrong. I support the Homeland Security Committee examining "radicalization" in this country, and in our prisons, provided it is a comprehensive review, not a discriminatory one that targets only one subgroup of America. I support the committee examining "violent extremism" in this country, including an examination of militias and the 30,000-plus gun-related deaths that happen each year. I support a committee chair that is keen to keep our homeland secure.

This is not the case with King. These hearings do little to keep our country secure and do plenty to increase prejudice, discrimination and hate. I thought we learned a lesson or two from my internment camp experience in Colorado. I hope I am not proven wrong.

The opinions in this commentary are solely those of Michael Honda.