It's time for action on Sudan

By David Sullivan and John Prendergast, Special to CNN 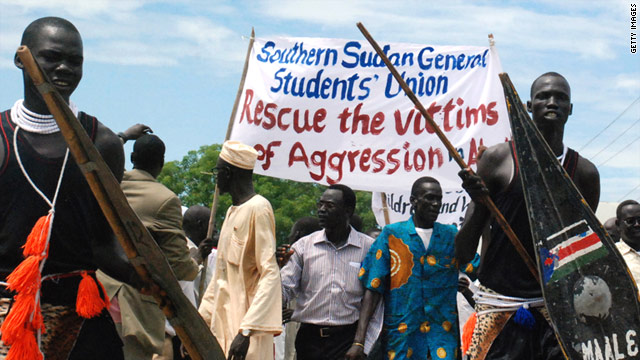 Sudanese demonstrators in the southern capital Juba protest the northern military occupation of the Abyei region on May 23.
STORY HIGHLIGHTS
RELATED TOPICS

Editor's note: David Sullivan is director of research for the Enough Project, an anti-genocide group in Washington. John Prendergast is a co-founder of Enough and a co-author of "Unlikely Brothers: Our Story of Adventure, Loss and Redemption."

(CNN) -- "We can issue statements, but where's the leverage?" a despondent Western diplomat complained to a journalist after the Sudan armed forces invaded Abyei, driving more than 100,000 people from their homes and upending the faltering peace agreement that ended Sudan's long-running north-south war, which will culminate in the separation of Southern Sudan on July 9.

Despite widespread condemnation, the Sudanese government has chosen to wage war against its own people. It has bombed civilians and appears to be engaging in a campaign of ethnic cleansing against populations in the Nuba mountains of South Kordofan, continues to bomb civilians and deny aid to displaced persons in Darfur, and has accelerated support for dissident militias in Southern Sudan.

Although Monday's deal to get a robust contingent of Ethiopian peacekeepers into Abyei is a welcome development, it does not change the calculations of regime officials, who seem to believe they can disregard prior peace agreement commitments and face no serious consequences for their violence.

If past practice holds, regime officials would be absolutely correct. That's why it is crucial for the U.S. and other concerned countries to shift gears by creating consequences for bad behavior. The imperative must be to apply concrete pressure on the individuals most responsible for atrocities and most likely to spoil Sudan's historic chance for peace.

This will require combining enhanced diplomacy with coercive economic measures, and immediate steps to show that the U.S. stands on the side of groups defending civilians and supporting democracy in Sudan and Southern Sudan, and demonstrating that the hardliners in Khartoum -- and the south and Darfur for that matter -- who press for confrontation and routinely employ violence will face personal consequences.

There are four levels at which the U.S. can begin to tighten the screws on spoilers of peace in Sudan.

The first is unilateral U.S. action. This begins with the expansion of existing U.S. sanctions and other international law enforcement mechanisms to target the individuals most responsible for the conduct of war in Sudan. The Obama administration should immediately enable the sanctioning of anyone who contributes to violence along the north-south border, per existing measures focused solely on Darfur.

Under former special envoy Scott Gration, U.S. sanctions were allowed to atrophy, as he pressed for the systematic delisting of groups connected to the Sudanese government. It's time to rapidly reverse this process.

The U.S. should urgently map the financial connections between senior National Congress Party officials, the Sudanese military industrial complex and its outside trade partners, financial backers, and other intermediaries. With a sense of the regime's vulnerabilities, the administration should increase the pressure with credible threats of financial disruption and economic isolation. President Omar al-Bashir and his top adviser, Nafie al Nafie, should be the point of departure for this exercise.

Second, by working with allies and other interested parties, the U.S. can draw a deeper contrast between the benefits of peace and the repercussions of war for Khartoum. In the wake of the Arab Spring and the crises in Libya and Syria, the European Union is more willing to oppose gross human rights abuses abroad.

The U.S. should lead multilateral efforts to block Sudanese transactions in dollars and expand this to include the euro. The Treasury Department has stated that U.S. sanctions drove Sudan to convert its foreign reserves from dollars to euros, so additional pressure on this front would clearly bear fruit.

Third, the U.S. and China need to work together as the two countries with the most leverage in Sudan. There is a point at which the Sudanese regime's effort to plunge the country back to war begins to affect China's economic interests, given its major oil sector investments. The United States should press China to rescind its invitation for Bashir to visit China and dispatch a senior administration official to develop joint diplomacy in support of a peace deal, including pressures and incentives to leverage that agreement.

Finally, given that hundreds of thousands of Sudanese have been forced from their homes -- with even the United Nations referring to ethnic cleansing -- and with a risk of dramatic escalation, it's time to consider the "Responsibility to Protect" doctrine. Absent support for international military intervention to protect civilian lives, there are other measures that can be taken that could defend vulnerable populations.

Considering the enormous damage done by aerial bombing and attack helicopters, the U.S. should provide air defense capabilities to the government of Southern Sudan to deter further attacks and defend civilians. And the U.S. and other nations should increase their commitment to support the defensive capabilities of the new army in Southern Sudan, with the attendant leverage to improve that force's human rights record. This will be the most important deterrent to further north-south conflict.

The current policy of encouraging the path to peace in Sudan has failed. Creating consequences for human rights crimes and providing the means to protect civilians would send the necessary signals that could help avert a full-scale all-Sudan war.

The opinions expressed in this commentary are solely those of the authors.