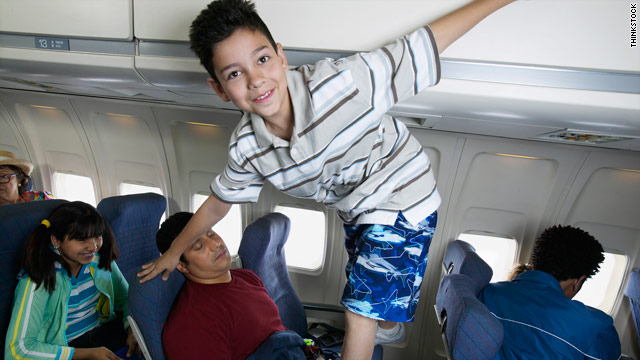 LZ Granderson does not think this kind of airplane behavior is cute, and asks parents to rein in their kids.
STORY HIGHLIGHTS
RELATED TOPICS

Editor's note: LZ Granderson writes a weekly column for CNN.com. He has just been named Journalist of the Year by the National Lesbian and Gay Journalists Association. He is a senior writer and columnist for ESPN The Magazine and ESPN.com, and a a 2010 nominee and the 2009 winner of the Gay and Lesbian Alliance Against Defamation award for online journalism. Follow him on Twitter: @locs_n_laughs

Grand Rapids, Michigan (CNN) -- If you're the kind of parent who allows your 5-year-old to run rampant in public places like restaurants, I have what could be some rather disturbing news for you.

I do not love your child.

The rest of the country does not love your child either.

And the reason why we're staring at you every other bite is not because we're acknowledging some sort of mutual understanding that kids will be kids but rather we want to kill you for letting your brat ruin our dinner.

Or our plane ride.

Or trip to the grocery store.

Or the other adult-oriented establishments you've unilaterally decided will serve as an extension of your toddler's playpen because you lack the fortitude to properly discipline them, in public and at home.

And we know you don't discipline them at home because you don't possess "the look." If you had "the look," you wouldn't need to say "sit down" a thousand times.

If you had "the look," you wouldn't need to say much of anything at all. But this nonverbal cue needs to be introduced early and reinforced diligently with consequences for transgressions, just like potty training. And whenever a kid throws a temper tantrum in the middle of the shopping mall it's just as bad as his soiling his pants to spite his parents, and it stinks just as much.

If you had 'the look,' you wouldn't need to say 'sit down' a thousand times.
--LZ Granderson

I have seen a small child slap her mother in the face with an open hand, only to be met with "Honey, don't hit Mommy." I have seen kids tell their parents "Shut up" and "Leave me alone" at the top of their lungs -- and they are not put in check. I shake my head knowing it's only going to get worse from here.

If I'm sounding a bit judgmental, I assure you I am not alone in my judgment.

Remember that couple that was kicked off an AirTran flight for being unable to control their 3-year-old back in 2007? The child threw a tantrum, refused to get in her seat and delayed the flight by 15 minutes. In a subsequent interview with "Good Morning America," the mother talked about how much more understanding the passengers were compared to the crew that removed the family. That may be true -- but I'm also willing to bet plenty of passengers were happy to have a much quieter flight. An AirTran spokesperson estimated 95% of the 9,000 e-mails the airline received were supportive of taking the family off the plane, according to MSNBC.

Responding to complaints about crying babies keeping people awake, Malaysia Airlines decided to ban infants from first class in some of its flights.

I don't know about you but I would gladly support an airline or restaurant that didn't make someone else's yelling, screaming, kicking offspring my problem.

And there are kid-free cruises and resorts for a reason.

Children are wonderful but they are not the center of the universe. The sooner their parents make them understand that, the better off we all will be.

This is the part of child-rearing people don't like to discuss, because socially, it's not OK to dislike kids. The ugly truth is it's the spineless parents who parade their undisciplined children around like royalty that make people dislike kids.

Parents who expect complete strangers to just deal with it are not doing anyone, including their children, any favors. They are actually making things worse. Not only are their children allowed to interrupt social events and settings when they are young, but they often grow into disruptive forces in the classrooms later. And nobody likes them for that.

I covered education for years and one of the biggest complaints from teachers was about the amount of time they spent disciplining students. Their threats were empty because parents sided with their kids. And, of course, the use of corporal punishment in the classroom is seriously frowned upon, and even punished.

Spanking is not a cure, and should not be the first resort, but I don't think it should automatically be taken off the table when dealing with small kids. We're so preoccupied with protecting children from disappointment and discomfort that we're inadvertently excusing them from growing up.

A young child slapping his or her parent's hand away in defiance is not cute, it's disrespectful. In my house, growing up, that would have earned much more than "the look" from my mother.

As a parent, I can empathize with how difficult raising children can be. There are challenges, especially within the framework of divorce, when parental guilt can sometimes blur what should be the best decision.

But I don't believe making a child's wishes top priority is a demonstration of love. Nor do I believe I, or the rest of the world, should act as a surrogate parents for somebody's bad-ass kids.

You wanted them, deal with them.