By Anthony Atala, Special to CNN 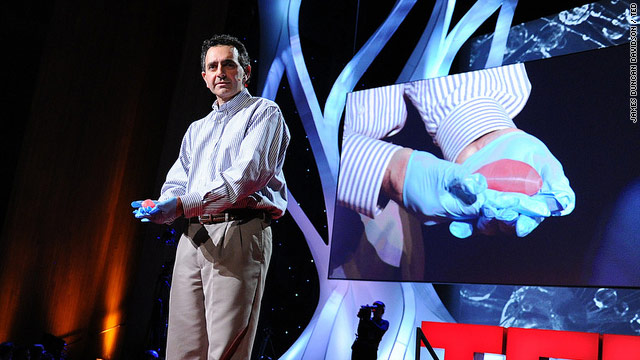 Editor's note: Dr. Anthony Atala, director of the Wake Forest Institute for Regenerative Medicine in Winston-Salem, North Carolina, spoke at the TED2011 conference in March. TED is a nonprofit organization dedicated to "Ideas worth spreading," which it distributes on its website.

Winston-Salem, North Carolina (CNN) -- Is it possible for humans to regenerate a damaged body part the way starfish and salamanders can? Will doctors one day be able to replace cancer-ridden organs with healthy ones engineered in a lab? Will lengthy waiting times for organ transplants eventually become a thing of the past?

In fact, scenarios like these aren't outside the realm of possibility. Regenerative medicine therapies are already helping small groups of patients through clinical trials; and scientists around the world are working both to expand the applications of these therapies and to bring them into more widespread use.

The effort to harness the body's natural healing powers has been called a new frontier in medicine because it offers the promise to actually cure, rather than just treat, disease. It has a several components: injectable cell therapies to promote healing; replacement tissues and organs engineered in the lab; and the use of bio-compatible materials or small molecules to prompt tissue regeneration from within the body.

These therapies are designed to take advantage of the body's healing abilities. For example, skin and bone tissue is constantly regenerating, and if part of the spleen is removed after being injured, it will regrow.

The world's first laboratory-engineered organ, the bladder, was implanted in patients beginning in 1998. The surgery has helped patients in several ways, such as the new organs being able to hold urine, and avoiding the serious condition of kidney failure.

As this and other therapies proved to be safe and effective, scientists have expanded their work to include therapies for virtually every area of the body.

Regenerative medicine offers the potential to improve the quality of life for many, but also to combat rising health care costs. Early estimates project that regenerative medicine therapies will result in direct health care cost savings in the United States of $250 billion per year for the chronic diseases of renal failure, heart failure, stroke, diabetes, burn and spinal cord injuries.

For example, as demonstrated at TED, our institute is combining the latest technologies in biomaterials, printer technology and computer aided design in a project to "print" replacement tissues and organs. The idea is to use patient data, such as from a CT scan, to first create a computer model of the organ to be printed. This model is used to guide the printer as it layer-by-layer prints a three-dimensional structure made up of cells and the biomaterials to hold the cells together.

This printer is unique in that it can use biomaterial gels as well as rigid polymers -- so that any three-dimensional shape can be created. In addition, it can print proteins, growth factors and other liquids into the structure to help promote regeneration once implanted. This device is still experimental and is being explored for organs such as the kidney and structured tissue such as the ear.

While previous research suggests the potential for this type of kidney structure to function in the body, we of course have many challenges to meet before this technology is ready to be tested in humans.

The project is based on earlier research in which we were able to show that miniature kidneys could be engineered using biomaterials and cells. In animals, these miniature kidneys were shown to be functional, in that they were able to filter blood and produce dilute urine. The printing technology is one of several strategies we are now using to try to make larger functional units for the kidney and other solid organs.

The ultimate goal of this project, like all others we pursue, is to develop therapies that can improve patients' lives. This is a strong commitment that we share with many scientists around the world. I believe that with this patient-centered focus, and the opportunity to leverage continuing advances in science and technology to build on the field's early successes, the promise of regenerative medicine will be fulfilled.

The opinions expressed in this commentary are solely those of Anthony Atala.