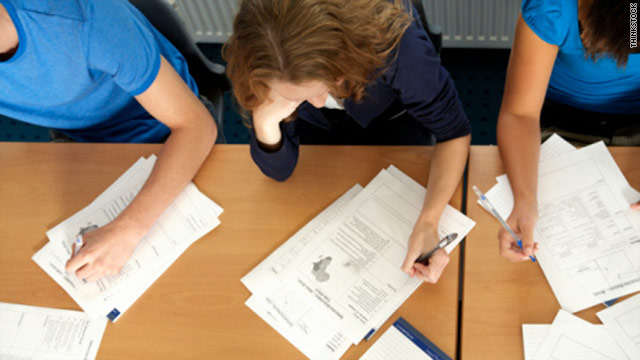 Editor's note: Chester E. Finn Jr. is a senior fellow at Stanford's Hoover Institution and president of the Thomas B. Fordham Institute. He is a former assistant secretary at the U.S. Department of Education under President Ronald Reagan.

(CNN) -- The latest shock to hit American schools and education reformers is the revelation that teachers and administrators have been fiddling with test scores in Atlanta and, evidently, in Washington, Baltimore and half a dozen other locales.

In Georgia, where a state investigation implicated 178 individuals in the Atlanta public schools for cheating on or allowing cheating on the 2009 round of state assessments, Gov. Nathan Deal declared that "When test results are falsified and students who have not mastered the necessary material are promoted, our students are harmed, parents lose sight of their child's true progress, and taxpayers are cheated."

In Washington, Education Secretary Arne Duncan said he was "stunned" by the revelations of a "culture" of cheating in the Atlanta schools, and that it "is absolutely inexcusable." A day later, the Education Department's inspector general joined the investigation of test-score mischief in the Washington schools.

Duncan and Deal are right, of course: Falsified test results do serious damage to kids, schools, parents and communities. Teachers don't have accurate information on how their pupils are doing. Parents are misled. Schools that need to change get a pass. And nobody trusts the fundamental data system on which our standards-and-outcomes-based accountability systems rest.

As destructive as the actual cheating, however, is the cry from many directions that the remedy for it is to do away with testing or, at minimum, radically reduce our reliance on its results as markers of student and school performance. Michael Hout, the Berkeley sociologist who chairs a National Research Council's Committee that has been crusading for less testing likened the Atlanta scandal to the Enron meltdown. My old friend Diane Ravitch predictably blamed No Child Left Behind for the Atlanta scandal and called once again for that "terrible" law to be repealed.

It's clear that systems that gauge student, teacher and school performance on standardized test scores put intense pressure on those results and inevitably tempt people to finagle them. It's also clear that there's much we want to know about student, teacher and school performance that cannot be determined from test results alone. No well-conceived and well-run system -- in education or anywhere else -- would hinge everything on just a few numbers. (In business, for example, this year's profitability is only part of what a savvy investor or board member demands to know about a firm's performance, its health and its prospects.)

Education should have a well-established, well-respected information system that yields varied and comprehensive indicators about kids, teachers, schools and school systems. (Any number of worthy organizations are trying to do something about that, including the Data Quality Campaign, the Council of Great City Schools, and GreatSchools.org). For now, we tend to build our accountability systems on test scores, maybe graduation rates, and not much else.

A problem, indeed, and one worth solving, but not an argument against testing as a key element in learning about how students are doing and holding educators and schools accountable.

But let's face it: Any measures that include rewards and sanctions, gold stars and interventions, praise and embarrassment, even determinations about the future of entire institutions and those who work in them -- any and all such measures invite tampering by those who have reason to seek better results than the plain truth reveals.

Regrettably, this is about human nature, not about the immediate example of test-score cheating in a few hundred of our nearly 100,000 schools. Think about tax cheating; Medicare fraud; pleading innocent when one is guilty; professors plagiarizing and medical researchers falsifying their data; and on and on.

It's always wrong. It's always bad. It's usually illegal. And it always raises doubts about the integrity of the entire enterprise of which it's part.

But that doesn't lead us to abolish taxation or Medicare or criminal courts or academic journals and scientific labs. What it does is lead us, on the one hand, to expose, condemn, shame, punish and isolate the malefactors and, on the other hand, to create better security systems, oversight and double-checking. That's why the IRS conducts audits, why Medicare employs fraud investigators, why courts have juries and judges, and why scholarly journals engage in peer review of papers submitted for publication. Even more simply, that's why the state trooper sits in wait along the highway to deter us from exceeding the speed limit and to punish us (with fines, points, etc.) when we're caught doing so.

And that's why assessment in our schools needs to pay greater attention to test security -- and pay the costs of doing this properly.

Cheating is rare on expensive tests such as the SATs, ACTs, APs and NAEP because test-givers and their contractors spend what it takes to have their sessions proctored, their test booklets kept secure before and after their administration, and the scoring done by individuals or machines in distant locations that are unaffected by the results of that scoring.

State assessments, though, are generally done on the cheap, and the teachers and administrators within schools are the main agents of administering, storing, retrieving and shipping them back to the firm that scores them. State assessments thus invite tampering of the sort we've been lamenting -- and the temptation is strong, because the stakes for teachers and schools are higher on those assessments than on tests used for college admission and such.

Cheating should not lead us to abandon assessments, even as we develop additional performance indicators for our schools and educators. Listen to University of North Carolina testing expert Gregory Cizek, who participated in the state investigation of cheating in Atlanta.

As reported by Education Week, "Mr. Cizek said districts and states should not abandon accountability in the wake of testing misdeeds, but they should get serious about test security. Current processes for spotting problems are 'anemic,' he said. 'You have to assign this to an independent body that doesn't have a stake in the results,' Mr. Cizek added, rather than the state department of education. 'Assign the cop duty to someone else.'"

The opinions expressed in this commentary are solely those of Chester E. Finn Jr.