I'm her mom, not the nanny! 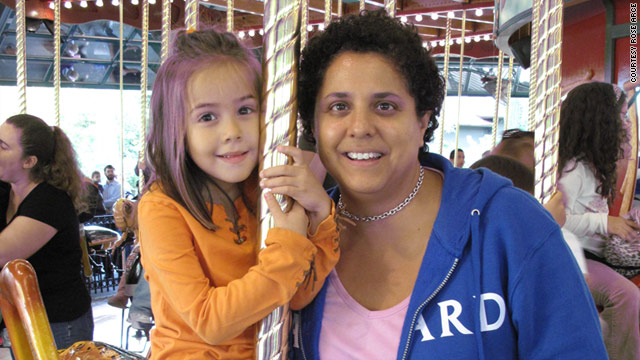 Editor's note: Rose Arce is a senior producer at CNN and a contributor to Mamiverse, a website for Latinas and their families. She is leading the upcoming documentary "In Her Corner -- Latino in America" about a Mexican American amateur boxer, Marlen Esparza, fighting to become the first woman to box at the Olympic Games. It airs 8 p.m. ET September 25.

New York (CNN) -- We were at a Manhattan water park when it happened. I was with my then 3-year-old daughter, Luna, playing in a sandpit on a foul, chilly morning beneath clouds that looked like ripped paper. It was no day to be outside, but living in a city of small apartments, it was no day to be inside with a child either.

A little girl approached the two of us, clearly interested in playing. But when she arrived, she addressed only Luna. Pointing a finger at me, she asked her, "Is that your babysitter?"

I've been mistaken for babysitters all my life -- or waitresses, sales clerks, even the occasional cleaning lady -- but it's a whole new experience to have it happen in front of my child.

It's not that there are no Latinos in Manhattan who wouldn't upset the stereotypes. There are just too few of us in the upper middle class universe where I live who aren't, well, babysitting or selling things. I get where this idea originated. I even understand why little kids are so frank.

Then her dad walked over. "I'm her mother," I told him, and he looked perplexed. "I don't think we know anybody Hispanic who isn't a babysitter," he said.

Luna is much fairer than I am and has dead straight hair that becomes a soft brown in the sun. I have dark curly hair like most everyone in her extended family. Luna is well aware that we don't look alike.

Even today at 6, she sometimes sits on my lap and weaves her fingers through my curls and the lines on my face searching for a resemblance. It doesn't matter how many times I tell her not all mamas and little girls look alike -- for any number of reasons. She still wants to look like me. It's her tiny effort at solidarity.

She knows people think I look like her sitter because I'm Hispanic -- or at least what they think Hispanic looks like. And she senses that being a sitter is a subservient job. But I'm her mama, so she is protective of the brand.

Luna does have a Hispanic babysitter. I had one too. My old babysitter is now 96, and my family cares for her like a grandmother. She was shy in front of people because she never learned English. I suffered the way people treated her at times. I learned so much from her about what is valuable in people.

Luna is having that same experience. Her sitter speaks only Spanish and has an elegant humility that Luna has adopted. I treat her with affection and respect and don't regret a penny I pay her. So why did I feel unsettled by being confused with a babysitter?

Can't I just tell Luna that plenty of Latinos choose careers or jobs other than child care -- or would the defensiveness of that statement just disparage babysitters even more? Can I just say, "It's who you are inside that counts," as her teachers tell her endlessly in preschool?

Inside, I know who I am. I've always believed there are two types of people: The people who kick the grocery shopping cart into the parking lot before driving off and those who take the time to walk the cart back to the store. I am a returner. I follow rules, put my hand on my heart during the national anthem and always call the city to report potholes. I may have dark curly hair and an unpronounceable last name to some, but deep inside, I am an American just like them, right?

You can't take down that solid identity with a few words of brazen stereotyping. I have heard it all before. People have called me "senorita" and "spic" and grabbed my arm on the way to a restaurant restroom to demand: "Can I get some service here?" Folks are always stopping me in the street for directions. Latinos, we give great directions.

So when a lady cab driver asked me how much I get for babysitting her, it really shouldn't have rocked my sense of self. At first I laughed and told her I wish I got paid. "Why would you babysit her for free?" she asked.

"I'm her mother!" I said laughing. Luna laughed, too. When they laugh at two it sounds like a puppy coughing. "You couldn't be," she said sizing me up in the rearview mirror. That was when the puppy coughing stopped, and the crying began.

I could bruise this lady with sarcasm, but I don't really care about her. I care about the little girl on my lap who wouldn't even get the joke. That's why all this makes me uncomfortable. Children need simple explanations, and there are none.

One day, I took her to a festival at the St. Luke's private school in Greenwich Village. We had already paid, but I came back carrying my friend's baby while she bought her own ticket. "You also have to pay for your babysitter," the ticket lady said sternly.

Luna was old enough to talk by then so she said: "We already paid." But ticket lady wasn't buying it. "For your sitter, little girl. You can go in but your sitter needs a ticket." "She's my Mama," she said firmly and pulled my hand. "Mama come."

So by the time we got to the water park, we had settled into a familiar rhythm with this whole thing.

The child's father had said he didn't think he or his daughter had ever met anyone Latina who wasn't a babysitter. "Now you have," I told him and shook his hand. "I'm Rose, Luna's mother."

I looked at Luna and asked her "who else we know that is a Latina." She started to list people.

Eventually he told his daughter: "You can't just assume things about people." And all of us shook our heads and resigned ourselves to building sand castles together beneath a gloomy gray sky.

The opinions expressed in this commentary are solely those of Rose Arce.