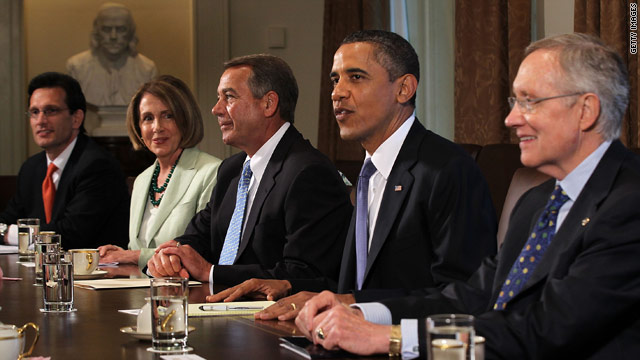 When congressional leaders met with President Obama this month, the participants were all men, except for Nancy Pelosi.
STORY HIGHLIGHTS

Editor's note: LZ Granderson, who writes a weekly column for CNN.com, has been named Journalist of the Year by the National Lesbian and Gay Journalists Association. He is a senior writer and columnist for ESPN The Magazine and ESPN.com, and a a 2010 nominee and the 2009 winner of the Gay and Lesbian Alliance Against Defamation award for online journalism. Follow him on Twitter: @locs_n_laughs

Grand Rapids, Michigan (CNN) -- There have been press conferences and secret meetings.

For every line a Democrat draws in the sand regarding the debt ceiling, a Republican introduces a new line of his own.

Or sometimes for kicks, a constitutional amendment.

Yes, over the past three weeks, we've seen just about every act there is to this political theater and, staying true to the time of Shakespeare, it seems every character is played by a man.

Odds are that if there were more women in these discussions, the crisis would have been resolved by now.

Despite representing 51% of the country, women account for just 16.6% of Congress -- 17 of the 100 seats in the Senate, 72 of the 435 seats in the House. When President Obama had his "Big 8" meeting to talk debt ceiling a couple of weeks ago, there was only one woman present, Nancy Pelosi.

Now I don't claim to be a great mathematician, but that just seems off to me.

Especially when you consider that for more than 20 years there have been more women enrolled in college than men and today there are a million more female college graduates than male.

Between the growing education gap and gap in population, the fact that those numbers have not translated into a bigger voice in how the country is run can only be described as the result of sexism. And it's likely hindering our governance when you consider what we know about neuroscience.

Women use both sides of their brain more effectively and thus are naturally hardwired to be better communicators, more creative problem solvers and in moments of stress, less likely to walk out of meetings -- debt-ceiling variety and others -- than men.

Furthermore, testosterone not only prompts a fight-or-flight response to stress, it suppresses oxytocin, the hormone that encourages bonding and positive social behavior.

So while culturally people like to cast women as mentally weak and unable to control their emotions -- supposedly making them bad leaders -- the science suggests we really don't know if Eric Cantor and President Obama abruptly left their respective tense budget meetings as a negotiating tactic or if they simply couldn't control their hormones.

This is not to suggest women are naturally better at governing than men, only that it is difficult to see how the country can continue to believe we benefit from their absence on the Hill.

We've always handled our affairs through a patriarchal prism, but today that ideology marginalizes the more educated and largest segment of the population. When you factor in our love for waving our gender-equity finger at other nations, it would seem we're in dire need of a mirror if we're truly going to turn things around.

America is 235 years old but only a total of 267 women have served in Congress, including Rebecca Latimer Felton, who was there for one day. Four states -- Delaware, Iowa, Mississippi and Vermont -- have never even elected a woman to Congress, according to the Center for American Women and Politics.

What does it say about us as an industrialized nation that after three decades of dramatic social, economic and demographic shifts between the genders, there has only been one woman to follow the late Geraldine Ferraro as a major-party national nominee? And I bet if Sen. John McCain could do it all over again, Ferraro would still be the only one.

Of course, we can't blame the absence of women in budget talks and such entirely on the boys club in Washington, seeing how it's we the people who elect members of Congress in the first place. And to be sure, voting based solely on gender or simply having more women on the Hill hardly solves our economic problems. Women have egos and are susceptible to pride, peer pressure and pandering just like men.

And as Sarah Palin and Michele Bachmann have proven, they can be just as clueless.

But as the August 2 debt ceiling deadline looms, the real issue doesn't appear to be Dems vs Repubs; tax hikes vs spending cuts; or adults vs children.

It's an overall lack of diversity of thought.

Nearly 85% of the people in Congress are men. So if you ever wonder why these debt ceiling negotiations appear to have an inordinate amount of chest-pounding and tree spraying, that number -- more than the $14 trillion we owe -- seems like the best place to start.