Why America has to get off coal

By Michael Brune and Michael R. Bloomberg, Special to CNN 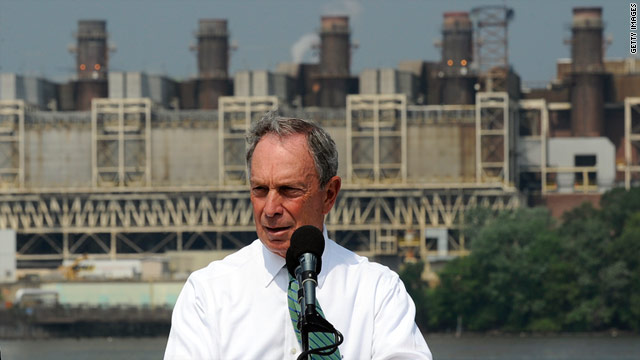 (CNN) -- One of the frightening new realities in Washington is that many strongly held policy positions are built on untruths. One of the most persistent untruths is that we can't afford to move away from coal-powered electricity.

The truth is, we can't afford not to quit coal. The cost consumers pay for power does not reflect the true cost of burning coal. Pollution from coal triggers asthma attacks, a disease that affects 20 million Americans and burdens our health care system. The toxic mercury released from old, outdated coal plants is the single biggest source of mercury emissions in America, making it a potential source of harm to pregnant women and children.

Each year, the soot emanating from coal-fired power plants kills an estimated 13,000 Americans prematurely, and is responsible for an astonishing $100 billion in health costs. These involve costs that consumers pay as well -- in their health insurance bills, in the Medicare and Medicaid costs that are breaking our budget, in lost productivity, and in the suffering that they and their children bear.

We can curb our addiction to coal -- not in some distant time in the future, but here and now. Coal supplies just 45% of the electricity in the United States, according to the U.S. Energy Information Administration. It is technologically and economically realistic to eliminate coal's contribution to the electric sector by 2030.

Iowa already gets 15% of its power from wind. The energy company Xcel, in Colorado, will soon get 30% of its electricity from clean energy. Even the NFL is getting into the act -- the Redskins' Stadium, FedEx Field, will soon be powered by solar, a technology increasingly affordable and efficient. And, when extracted responsibly, natural gas can complement these clean sources and is cheaper than coal.

Coal is also not the bargain for jobs that it's made out to be. The wind industry alone already provides more jobs than the coal mining industry does for miners. America's 2.7 million workers in the clean-tech sector earn 13% more than the median U.S. wage.

It's a myth that America needs coal to keep our economy running. It is a myth perpetrated by the pseudo-scientists, lobbyists and legal teams that protect the industry and disguise the true costs. Inside the Beltway, such myths -- and such lobbyists -- can block progress.

But that doesn't mean America is trapped by Congressional inaction. Because in America's towns and cities, local people can make a difference -- far away from K Street and partisan gridlock.

Over the last eight years, the Sierra Club's Beyond Coal Campaign has mobilized communities and allies to protect their own interests when new coal-fired power plants were proposed for their communities. When the lobbyists told them there was no other way, they worked with responsible companies to develop cost-effective clean-energy plans.

As a result, 153 proposals for new coal plants have been stopped -- three-quarters of the new coal capacity that coal developers have proposed since 2002. And that capacity has been met with a mixture of wind, solar, energy efficiency and other alternative, cleaner sources.

Now, Beyond Coal is pushing to close existing coal-fired power plants -- starting with the nation's oldest and dirtiest plants. We've had success already -- in Colorado, Texas and most recently the phase out of TransAlta's coal burning plant in Centralia, Washington. In fact, nearly 10% of America's coal capacity is already committed to be retired. But much more needs to be done.

That is why Bloomberg Philanthropies has committed $50 million over four years to the Beyond Coal campaign. This will help the campaign to expand from 15 to 45 states, increase the active member base from 1.4 million to 2.4 million and will double the number of full-time staff working on the effort from 100 to 200. As important, this partnership will have a significant environmental and public health impact, retiring a third of the nation's coal plants, as well as reducing coal generated mercury pollution by 90% and sulfur dioxide poisoning by 50% -- all by 2020.

Ending our reliance on coal will clean our air, improve our health, create jobs, and expand our economy. That's a reality that America has to act on -- town by town, power plant by power plant. The fact that Washington is at a standstill doesn't mean that America has to be, because this is a fight that we can win at the local level.

The opinions expressed in this commentary are solely those of Michael Brune and Michael Bloomberg.