By Marc Sageman, Special to CNN 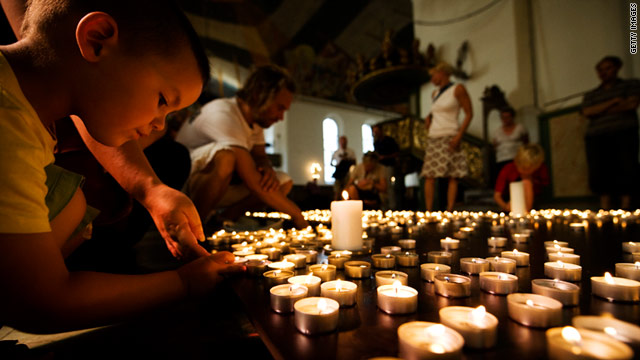 A boy lights a candle inside Oslo Cathedral on July 28 to honor the 76 victims of the attacks in Oslo and Utoeya island.
STORY HIGHLIGHTS

Editor's note: Marc Sageman is an independent consultant on terrorism and author of "Leaderless Jihad." and "Understanding Terror Networks."

(CNN) -- Any large-scale massacre, especially of young people, generates shock and horror. How could this be possible? The temptation is to dismiss it as the act of someone who is insane. Attributing mass murder to mental disorder is convenient, because further explanation is not necessary. We nod in superficial understanding, mourn the victims and go on with our lives.

But mass murder committed in the name of any political or religious ideology; whether Christianity, the proletariat, the Aryan race, Islam, freedom, the "indigenous European race," or any abstract notion becomes a political act and cannot be easily reduced to the perpetrator's psychological condition.

Terrorism emerges out of a political subculture. This raises questions about the relationship between a subculture of extremism and violence in its name.

Mainstream Muslims protest that terrorists like Mohammed Atta or Khalid Sheikh Mohammed, who claim to kill in the name of Islam, should not be viewed as true Muslims because Islam is a religion of peace. Many Westerners do blame this form of terrorism on Islam and claim that we are in an epic clash of civilization, opposing the medievalism of Islam and Western enlightenment.

Mainstream Christians have rejected Anders Breivik, the suspect in the recent killings in Norway, as un-Christian because Christianity is a religion of peace, even though Breivik advertises himself as a Knight Templar, defending European Christendom. Indeed, in his manifesto, Breivik often quotes from American neoconservative sources.

So, what can we make of this? Unfortunately, the scriptures of the Abrahamic religions contain passages that both praise and condemn violence against enemies. Do the intellectual leaders who help shape these extreme subcultures bear any responsibility for the horrors committed in their name? Are these preachers of hate guilty of inciting mass violence?

Comparing Breivik with any number of global neo-jihadi terrorists clarifies this issue. Just as these terrorists emerge from a neo-jihadi subculture rejecting the values of the West, so did Breivik emerge out of an Islamophobic subculture rejecting the immigration of Muslims to the West. In both cases, advocates seek justification of their views in a very selective reading of their sacred texts.

But it would be unfair to blame all participants in these subcultures for the violence as they are not part of the actual violent conspiracies.

Adherents to these causes range from people who blame the West for violence against Muslims, or Islam for the violence in the West, to those who go further and advocate the use of violence. The problem is that the milder critics provide some degree of credibility and legitimacy to the more rabid preachers of hate. Prejudice is never cost-free: It is the infrastructure of hate crime and terrorism.

It can seem as if the polarization of Western societies is getting worse. Right-wing, nativist, white supremacist, and Christian fundamentalist groups are on the rise both in Europe and the United States. The Southern Poverty Law Center reported that these hate groups have topped 1,000 in the United States for the first time since the group began counting in the 1980s. This does not bode well for homeland security in the future. It appears that even mild nativist advocates are fanning the flames of hate.

In liberal democracies, even distasteful activism is protected. These subcultures preaching hate against their opponents are legal, and should remain so lest we allow the government to decide which views are allowed and which are not.

But these subcultures often nurture people who are action-oriented. Some young zealots go on to think their fellow believers just "talk, talk, talk," and decide to take things into their own hands. They think of themselves as soldiers defending their imaginary community of Muslim victims, indigenous European victims, Christian victims, or simply white victims. They start taking martial arts, play martial games like paintball, buy weapons and practice with them.

They believe they are involved in a war and even dress like soldiers when they can -- the style is Afghan for neo-jihadis, and Knight Templar for Breivik. They initiate their conspiracies against their imaginary enemies and persevere despite widespread hostility from society. Fortunately, the number of those who go on to kill is very small compared with the number of members of their subculture.

The relationship between the leaders of these causes and terrorists is a complex one. On the one hand, the leaders usually do not take part in the actual violent attacks and cannot be blamed for them. Indeed, the terrorists often reject their leaders as just talkers. On the other hand, the leaders' ideas and advocacy inspired the terrorist wannabes and gave meaning to their act. Extremism is not the same thing as violence, but it promotes violence.

Let's hope that the tragedy in Oslo will stimulate discussion about the human costs of prejudice and help tone down the rhetoric of exclusion and alleged victimhood on all sides.

The opinions in this commentary are solely those of Marc Sageman.